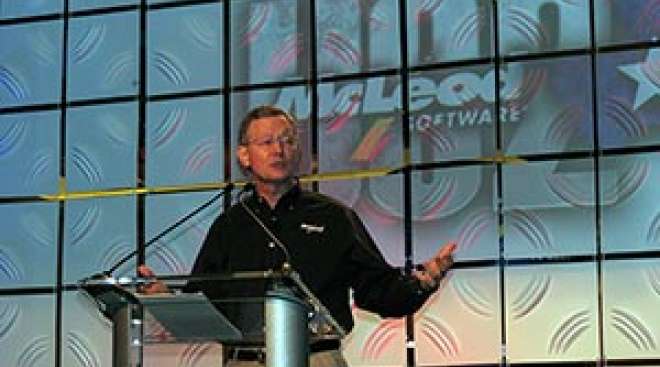 SAN ANTONIO — Upcoming regulations, the presidential election, a softer freight market and supply-chain disruptions are all contributing to “uncertain times” for the trucking industry, but those challenges also present opportunities for fleets who prepare better than their competitors, McLeod Software’s CEO said.

“When economic conditions are favorable, everybody’s doing well. When it’s headwinds, the skill of the sailor makes much more of a difference,” Tom McLeod said here Sept. 19 at his company’s annual user conference.

He said McLeod is focused on providing software tools that help its customers better manage their operations and make the best decisions to deal with fluctuations in the market and changes in the industry.

On the regulatory front, McLeod said the federal mandate of electronic logging devices, set to go into effect in December 2017, will give well-prepared fleets a chance to distance themselves from their competitors.

“I believe that will create one of greatest periods of opportunity there has been in the trucking industry in a while, in terms of being able to acquire new freight or adjust your network to focus on more profitable freight,” he said. “You’ve got shippers who are going to eliminate carriers based on the fact that they’re not electronic-log compliant, or not compliant in time.”

He predicted that the mandate will reduce longhaul truck capacity by about 5%, due in part to some small carriers choosing to exit the market rather than implement ELDs.

McLeod also pointed to the Food Safety Modernization Act as not only a challenge, but a “huge opportunity” for refrigerated carriers.

Carriers who have deployed technology and established business processes to meet shippers’ requirements will be well-positioned to gain business.

At the same time, carriers must contend with events that shift or disrupt the movement of freight, such as the opening of the expanded Panama Canal or the Hanjin Shipping bankruptcy leaving cargo stranded at sea.

“Being nimble — being able to adjust when things come along — is going to be more and more important,” McLeod said.

Given the uncertainty in the market, it is more important than ever for fleets to carefully manage their rates by lane and by customer to ensure profitability, McLeod said.

One McLeod customer in attendance also said he sees opportunity in upcoming regulation.

Steve Hoekstra, president of Hoekstra Transportation of St. Anne, Illinois, expects the ELD mandate to benefit his company because it has already implemented the technology.

“We are 100% e-logs. That’s helped us manage our business a lot better,” he said. “Our drivers wouldn’t go back to paper, and neither would we.”

Hoekstra said he attended the McLeod conference in large part to investigate driver apps and software applications that could help streamline driver communication and productivity.

“I want to look at what I can do to make the driver’s life better,” he said.

LoadPay, a secure payment platform that connects carriers, brokers and shippers, is designed to help carriers improve cash flow and track their upcoming payments while preventing fraud. Shippers and third-party logistics providers can use the platform to schedule automated payments to carriers.

Meanwhile, McLeod and Project44 said they are working to integrate McLeod’s PowerBroker software with Project44’s application program interfaces, or APIs, for less-than-truckload operations.

That integration, which the companies plan to release later this year, will give PowerBroker users access LTL carrier quotes, including base rates and accessorial charges, directly from carriers supplying information via the Project44 network. The integration also will support transit-time calculations.

“We spend a lot of time working on integrations with these vendor partners, because that’s what’s required to present a whole solution to the marketplace,” McLeod said. “We’ve made it our goal and guiding principal for years and years to be easy to work with and a great partner to offer the most connections and product solutions.”

McLeod also said it has created automated reporting functions that make it easier for customers to participate in the Truckload Carriers Association’s inGuage online benchmarking service.