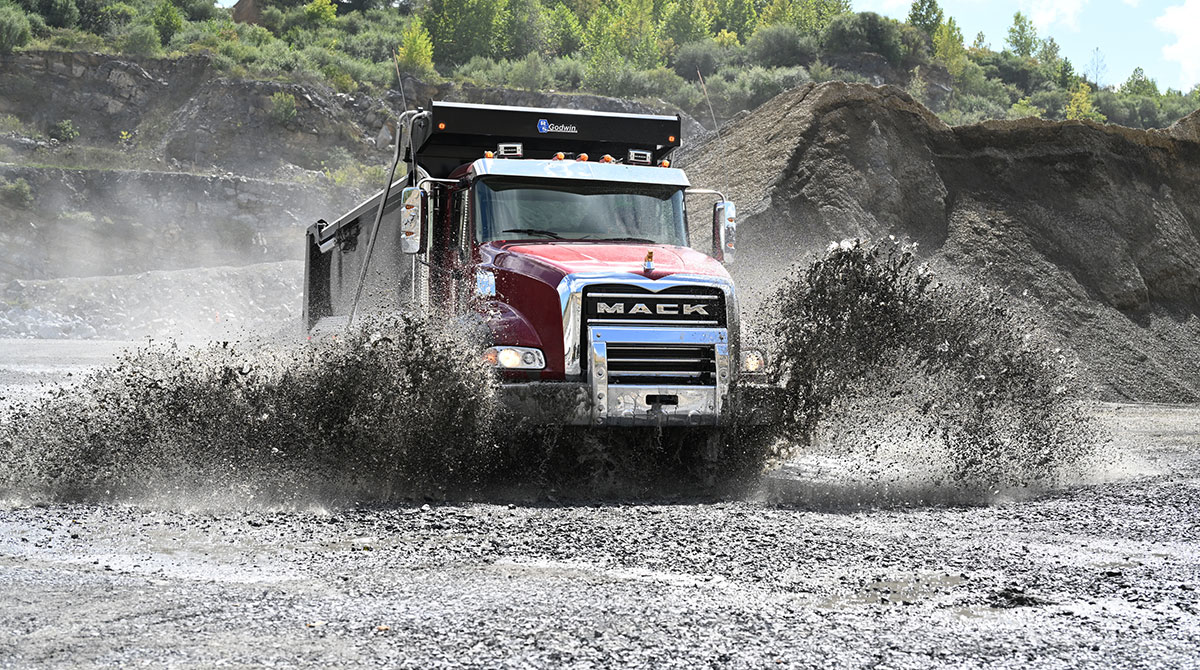 EASTON, Pa. — Mack Trucks offers 3,000 or so colors to choose from on a new truck, company representatives said, highlighting how its customers can be exceedingly particular about what they spec on their trucks. Command Steer, a recent variable steering option the truck maker hopes to build interest in, is one of those specs.

Command Steer combines an electric motor with the Mack Granite and Anthem models’ existing hydraulic steering. Multiple sensors throughout the truck monitor the terrain, driver inputs and environmental elements more than 2,000 times per second, according to Mack. Based on the collected data, the system provides variable steering effort through its electric motor, applying additional torque as needed to make it easier to keep the truck on the desired route.

The pandemic delayed its introduction to the trade press, until in a quarry, here, when Mack made its Anthem and Granite models with and without Command Steer available in a ride-and-drive — up and down steep grades, into and out of potholes and ditches and through a tight slalom of orange cones.

The cab bounced and rocked through the rough part of the course, and with Command Steer the wheel seemed to float, turning only so slightly. Mack noted the system reacts to those irregularities by countering the steer force, smoothing the steering feedback and reducing steering wheel kicks.

In a series of consecutive tight turns on flatter ground, the effort it took to change direction was feather light.

An additional benefit of Mack Command Steer, the company noted, is that the system features a unique return-to-zero capability that automatically returns the steering wheel to the center position in forward and reverse, helping to simplify tight maneuvers, for instance when backing into loading docks. 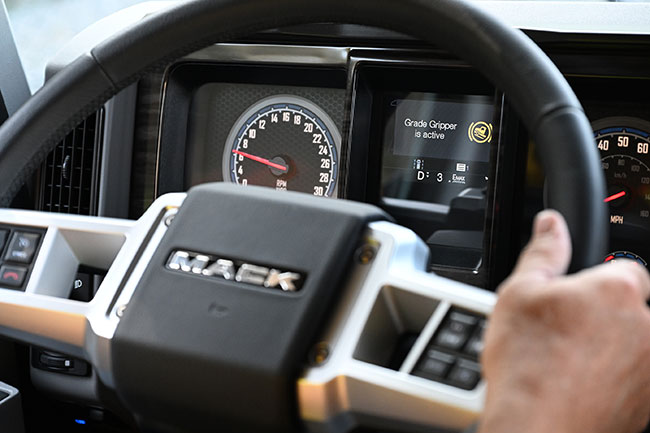 The quarry is one of many operated by H&K Group Inc., a Mack customer.

However, one driver for H&K who tested Command Steer much earlier, M&K executives told Transport Topics, said he wished the system could be turned on or off at will, especially when driving on roads or highways.

Still, the H&K drivers at the time did not get a lengthy test of the system, which the quarry executives described as a top-secret Mack project. 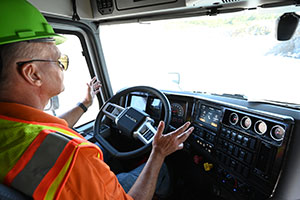 A driver goes hands-free over the bumps. (Mack Trucks)

“We are trying to get the word out there,” said Tim Wrinkle, senior product manager of vocational and medium-duty trucks at Mack. “Part of it is getting people in the seats. It’s a little bit hard to explain to someone why they need it until they use it.”

He said Mack also is trying to get trucks so equipped to its dealers for customer demos.

Less than 10% of Mack’s customers have spec’ed Command Steer, which went into production for the Granite model in March 2021.

The Command Steer option is only available on the axle-back versions of Mack’s trucks “because the steering gear, axle geometry and testing are totally different” compared with axle-forward models, he said. “About 50% of our vocational volume is axle-forward. So that takes part of vocational out of that equation immediately.”

The Anthem over-the-road model is an axle-back truck, he added, “so it made sense to start with the same geometry on both.”

Wrinkle estimated hydraulic steering gears came to trucks decades ago. “Truck drivers used to have really huge arms because they had totally mechanical steering. Command Steer is the next evolution on hydraulic steering, adding an electric motor on top of that.”