FedEx Freight Driver Is Headed Back to NTDC in August 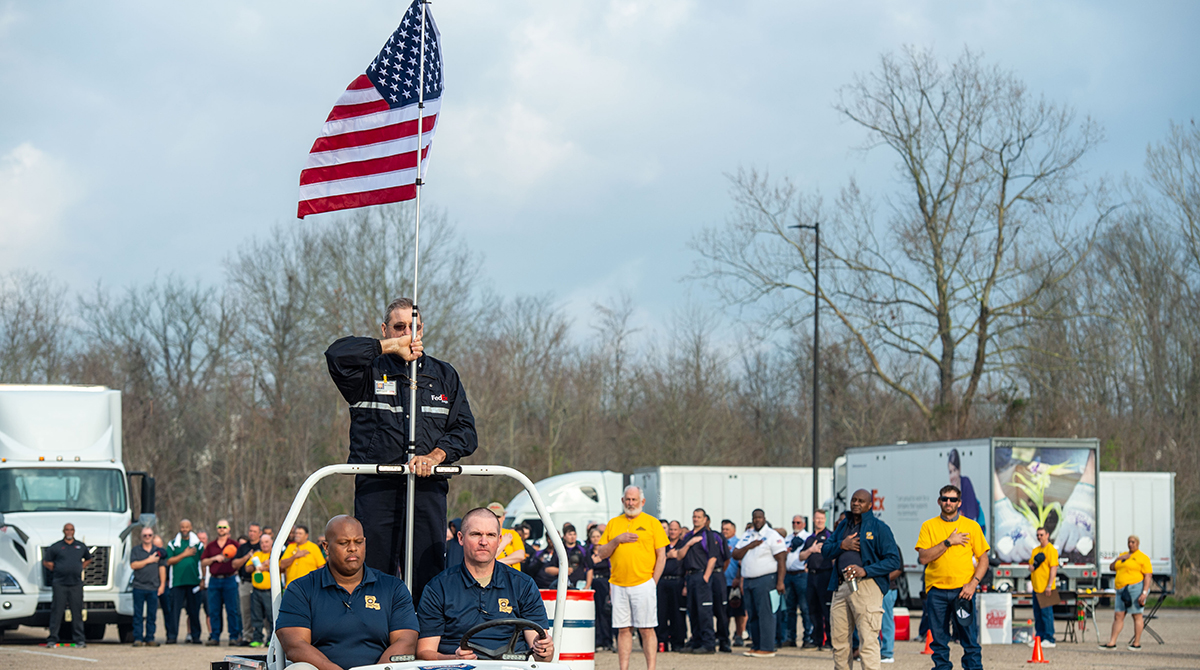 Courville presents the flag during the national anthem, an honor given to the most recent state Grand Champion. (John Ballance Photography)

With the road to the National Truck Driving Championships underway, a familiar face at the main tournament has already qualified.

Competing in 5-axle sleeper berth, Courville, a longtime driver with FedEx Freight, said he’s putting in the practice to ensure his readiness at nationals. A consistent presence at the elite level of commercial safety driving, Courville garnered awards and praise for his performance in 3-axle in 2013 and 2018 and sleeper berth in 2015.

He notes that one thing different about nationals is the absence of the elements. Unlike most state tournaments, the national stage is indoors.

“The inside atmosphere of NTDC is different,” he said. “The lighting, compared to the sunlight or clouds, rain; the elements, the weather — that’s totally different.”

Maintaining a focus also is key if a driver plans to excel at NTDC. Surpassing one’s previous performance and other competitors, each of whom is a winner from their respective state, requires mental toughness. Courville explained his strategy at NTDC is to not dwell on minor errors and strive for his best in every aspect of competition, such as the written test, pre-trip inspection and the safety driving challenge. As he put it, “Your mentality has to be top-notch because if you want to compete at nationals you got to compete your best.”

“It’s always coming down to that individual, as far as myself, trying to outdo my best from the past,” he added.

His message for fellow competitors aiming to qualify for the big stage: Stay on top of the training and prep for the state tournament. Getting a trip to nationals is not guaranteed. An NTDC ticket has to be earned: “Good luck in their state. Best wishes to all. I can’t wait, if the good Lord is willing, to see them in August.”

He affirmed, “I know they’ll do their best to make it to the nationals. And stay safe.”

Another familiar face already has secured a spot at nationals, as Ina Daly of XPO Logistics qualified as the tank truck champion from Arizona. Daly will be competing in her 15th NTDC and finished second in the 5-axle competition at the last NTDC, in 2019 in Pittsburgh. Mike Alpine of ABF Freight was Grand Champion in that state after winning the sleeper berth competition.

Nevada is holding its competition April 23, and then state championships begin to pick up steam with Mississippi, Tennessee and South Carolina holding their events over the weekend of April 29-May 1.

This year’s NTDC in Indianapolis is scheduled for Aug. 16-20.