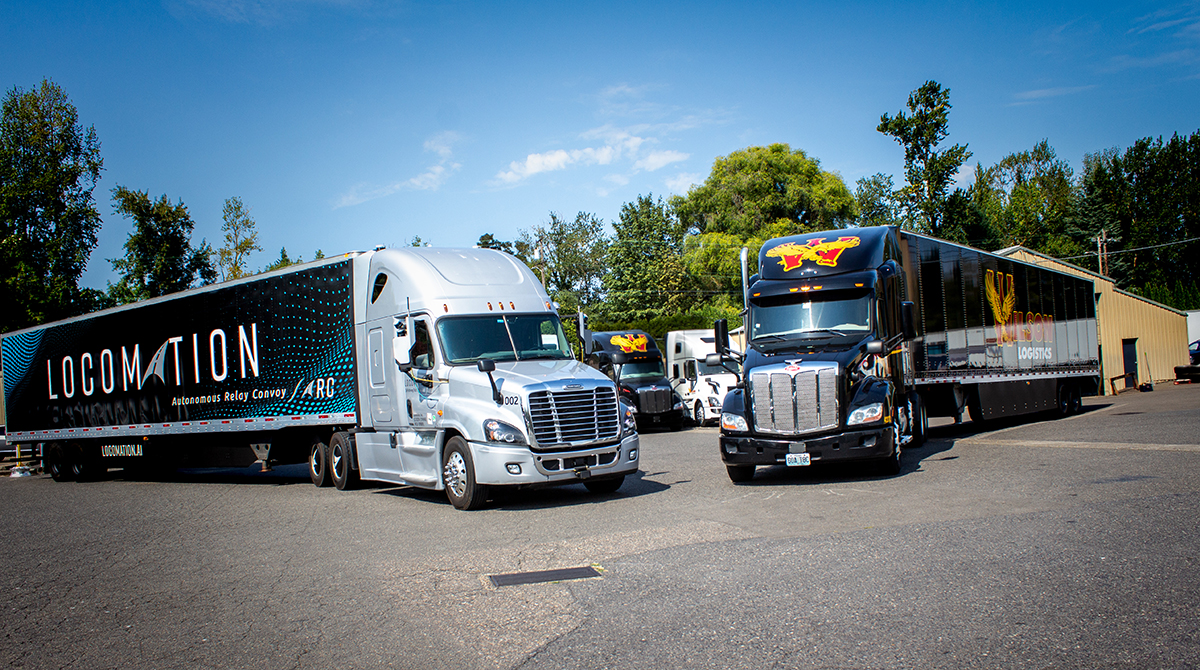 Locomation announced it will equip a minimum of 1,120 trucks operated by Wilson Logistics so pairs can be deployed in what the technology company calls an autonomous relay convoy — describing it as the first fleet purchase order for autonomous technology.

The deal would essentially double the size of Wilson’s existing 1,000-truck fleet, and the first will be delivered with the technology in 2022. It follows a successful testing earlier this year using safety drivers in Locomation tractors pulling Wilson’s trailers back and forth along 420 miles of I-84 from Portland, Ore., to Nampa, Idaho.

“We were happy to sign that deal with Locomation for the next step to the future of transportation, logistics and autonomy, as a whole,” Wilson President Ryan Farrell told Transport Topics. “A lot of planning goes into this, finding customers that are willing to partner, that want to be part of this program.” 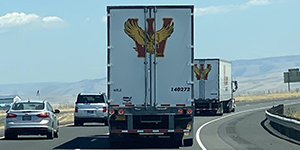 Trucks in the pilot program drive on the road between Portland, Ore., and Nampa, Idaho. (Locomation/Wilson Logistics)

The second autonomous truck would have a single responsibility — to follow the leader wherever the leader goes, Meriçli said.

“You have to do it responsibly. This is a phased-in approach,” Farrell said. “We are a family company and the last thing we want to do is put anybody else’s family at risk.”

He described the end goal as a team situation with two autonomous trucks, one driver monitoring, and the other in the sleeper berth in the second truck — which would require a change to the federal hours-of-service rules. Later on, trucks and drivers would swap roles.

“The end game is not to get rid of drivers. It is to elevate the driving job and make it a better experience at the same time as giving us a greener and safer mode of transportation,” Farrell said.

At some point Wilson will want factory installation of the autonomous technology. “The goal is full integration within the truck,” he added.

Just who would the OEM be?

“With the way Locomation created [the system], we could pick any manufacturer, probably. But as we get deeper into the relationship, that’s when we’ll decide which ones make sense for our specific deployment,” he said.

Wilson runs two heavy-duty brands and is trying a third.

“The biggest challenge is have a machine be able to understand the high-level dynamics, the semantics, the little meanings in the world that human drivers, or any human in general, are excellent at. We are so far away from replacing a human driver completely with a machine, from that point of view.”

The hundreds of pieces of information that are critical for the convoy formation and operation are pingponged wirelessly on the prototypes using a slice of spectrum called dedicated short range communications. But the company is not depending on DSRC, Meriçli said. Wi-Fi interests also covet a slice of that spectrum.

“We are still looking at what will go into our production. We could end up using DSRC in our product too, but that is a technical decision we haven’t made yet.”

The important part is the technology must have enough improvements in safety and efficiency, and economic benefits to justify not only the investment but also the behavioral hurdles in justifying a new piece of technology and getting accustomed to that, Meriçli said.

As for doubling Wilson’s fleet, it’s a familiar challenge.

“If you look at what we have done over the past five years, we have been able to pull that off. I think we are about three times the size we were five years ago,” Farrell said. “We are used to growing pains. It’s a lot of fun.”