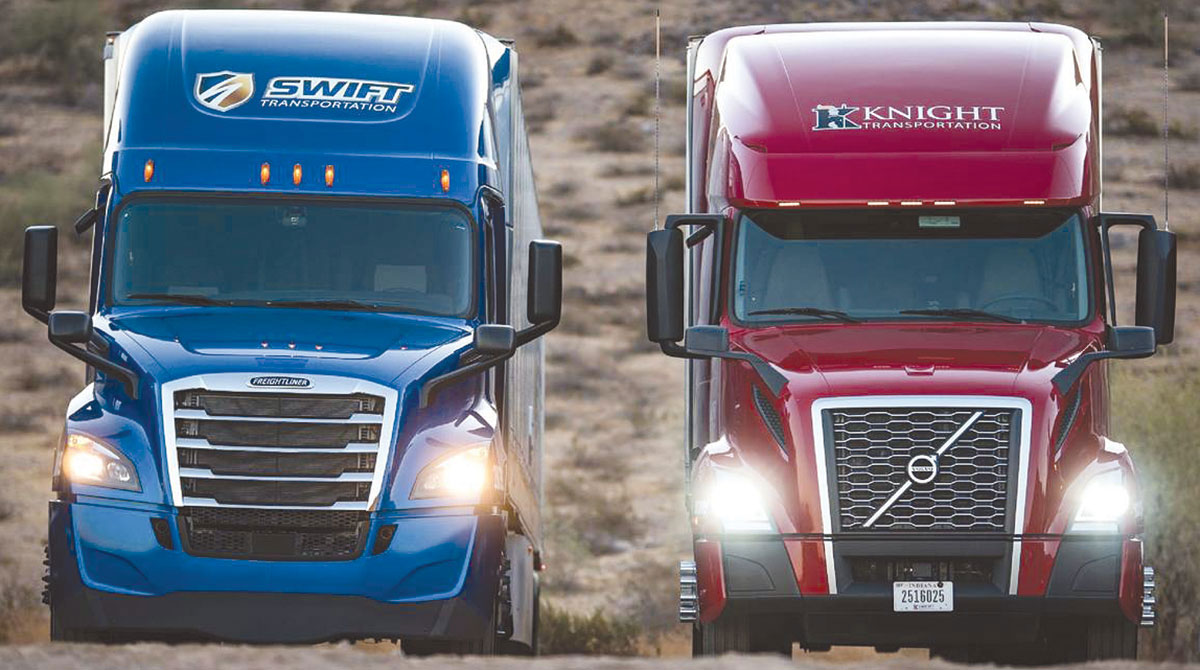 Knight-Swift Transportation Holdings reported a 78.9% jump in earnings Jan. 26 for the fourth quarter of 2021.

The results surpassed expectations by Wall Street investment analysts, who had been looking for $1.43 per share and quarterly revenue of $1.72 billion, according to Zacks Consensus Estimate.

“Our success in the truckload market has enabled us to make significant strategic investments for future growth,” Knight-Swift CEO Dave Jackson said in a statement. “We are building a nationwide LTL network with current regional coverage in the Southeast and Northwest with $927 million in annualized total revenues.”

Knight-Swift entered the less-than-truckload market July 6 with the purchase of AAA Cooper Transportation. The company later expanded the segment with the purchase of RAC MME Holdings. The LTL segment reported revenue of $177.9 million for the quarter with operating income of $13.7 million.

“We believe our pattern of preserving local culture and relationships while leveraging the network, scale and technology of Knight-Swift will continue to be successful in growing LTL as it has been in full truckload,” Jackson said. “We have invested significant resources into building our freight platform, which is creating value for our customers, in the form of additional trailer-pool capacity.”

The Select digital platform is a combination of proprietary technology, a sizable freight network, partnerships with small carriers and a large trailer fleet. It saw 84% load count growth and 20.7% gross margin within the logistics segment.

“We are grateful for the efforts of our hard-working team members in navigating the unique conditions of global supply chains as we continue to do our part to serve our stakeholders safely in a socially responsible way,” Jackson said.

Jackson also noted the company generated $908 million in free cash flow for 2021 and invested $1.5 billion in acquisitions. The company, he noted, has seen its adjusted operating income grow at a compounded annual growth rate of 33% since the merger between Knight and Swift in September 2017.

The truckload segment reported revenue for the quarter increased 5.5% to $992.7 million from $940.9 million during the same time the previous year. Operating income increased 29% to $251 million from $194.6 million.

The report noted that shipping demand has remained strong for the truckload segment. That led to more project business opportunities during the quarter. Those opportunities contributed to a 25.4% increase in revenue per loaded mile. Miles per tractor decreased by 12.3% primarily as a result of a 9.4% shorter length of haul. But overall, the segment saw an 8.5% increase in average revenue per tractor and improved margins.

The company contributed the rapid logistics segment increase to demand growing for its service offerings throughout the quarter. The load count grew by 84% while revenue per load increased by 30.2%. Select contributed to the quarterly results by matching nearly 5,300 carriers with available capacity to available loads.

The intermodal segment saw revenue increase 7.5% to $123.6 million from $115 million the prior year. Operating income increased 286.2% to $23.2 million from $6 million. The report explained that rail congestion and rail allocations resulted in a reduction in load count but also contributed to a 39.2% increase in revenue per load.

Knight-Swift was also able to leverage available equipment to support customer projects that led to improved margins within the intermodal segment. The company is anticipating operational improvements in cost structure and network design while transitioning to a new western rail partner and plans to add approximately 2,000 containers this year.

Knight-Swift ranks No. 6 on the Transport Topics Top 100 list of the largest for-hire carriers in North America.