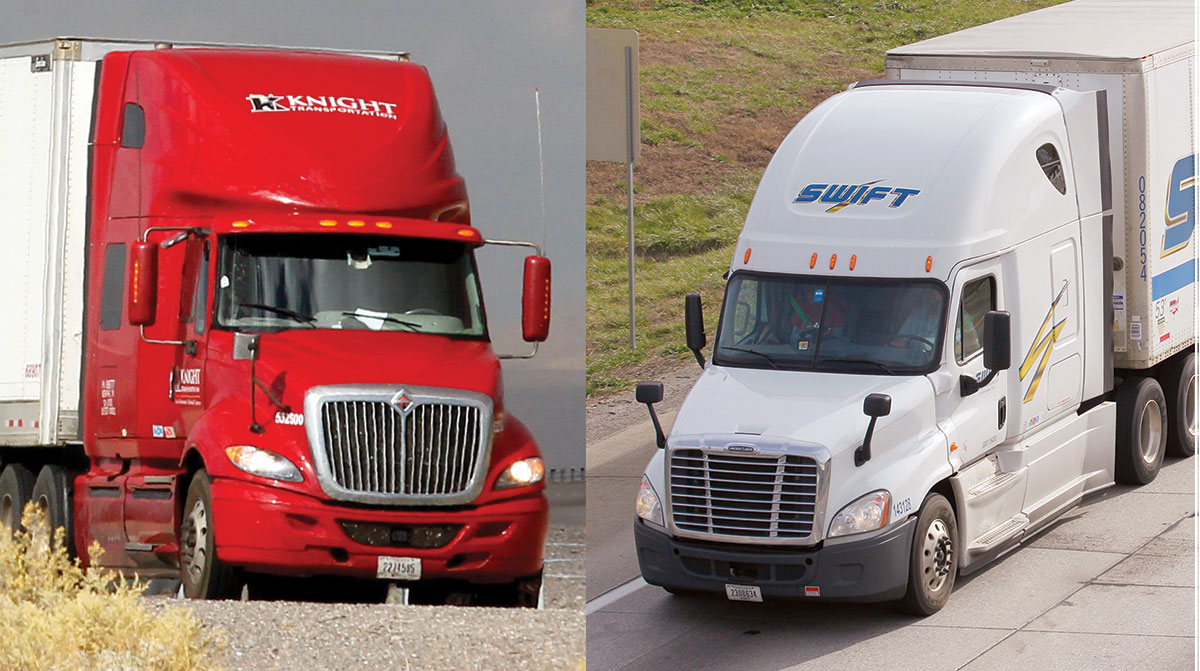 Knight-Swift's earnings and revenue gains in the second quarter stem from its strategy to develop essential services for third-party carriers, the company's CEO said. (John Sommers II for Transport Topics)

The Phoenix-based truckload motor carrier posted net income of $219.5 million, or $1.35 a diluted share, for the three months ending June 30. That compared with $152.8 million, or 92 cents, during the same time the previous year.

“These increases in revenue and earnings are from our overall strategy to develop essential services for third-party carriers,” Knight-Swift CEO David Jackson said during a call with investors.

Jackson said the company has three primary objectives in its carrier services. The first is to introduce new profitable revenue streams with lots of growth potential that further diversifies the company. The second is to leverage existing expertise in areas the company has proven industry-leading results. The third is to provide these services in a way that strengthens relationships with small carriers.

“We found tremendous interest in our offerings from third-party carriers that are interested in purchasing insurance and maintaining their equipment in our nationwide shop network or leasing equipment and leveraging our buying power to purchase fuel,” Jackson said. “These new and expanded services along with warehousing and equipment leasing have nearly quadrupled revenue and are on pace to generate $500 million of revenue this year with projected operating income of over $40 million.”

The results were close to expectations by investment analysts on Wall Street, who had been looking for $1.35 per share and quarterly revenue of $1.79 billion, according to Zacks Consensus Estimate.

Jackson also highlighted the progress leadership has made when it comes to intentionally changing the composition of the overall company into an industrial growth company. He noted that these diversification efforts have made the company less volatile and he expects will help mitigate the downside through truckload freight cycles.

The results were driven by an improved operating ratio and revenue growth. Revenue per loaded mile increased 21.2%. But miles per tractor decreased by 6.6%. Nevertheless, these factors ultimately led to an 11.1% increase in average revenue per tractor and improved margins. The segment includes irregular route, dedicated, refrigerated, expedited, flatbed and cross-border operations across the company brands.

The logistics segment saw revenue increase 52.5% to $247.3 million from $162.2 million last year. Operating income surged by 204.7% to $43.7 million from $14.4 million. Demand for the logistics service offerings remained strong. The company has leveraged its consolidated fleet of trailers to support power-only service offerings. Logistics revenue increased 52.5% as the load count grew by 48.2%. Revenue per load increased by 2.9%.

The intermodal segment reported that revenue increased 15.2% to $132.9 million from $115.3 million during the prior year quarter. Operating income jumped 143.8% to $14.2 million from $5.81 million last year. The results were driven by an improved operating ratio as well as street and rail velocity in many corridors. The surge came despite volumes at the beginning of the quarter being negatively impacted by longer container and chassis dwell times, as well as inconsistent rail network speeds. These factors contributed to a 39.2% increase in revenue per load, which was partially offset by a 17.2% decrease in load count.

Knight-Swift entered into the less-than-truckload space last year through a series of acquisitions. The new segment reported revenue at $224.2 million. Operating income reached $43.8 million. Revenue per hundredweight for the segment was $14.20 and revenue per shipment was $151.64. Knight-Swift expects segment capacity to grow by 300 doors across nine new or expanded locations during the back half of this year. The company is also looking for both organic and inorganic opportunities to geographically expand the segment footprint.