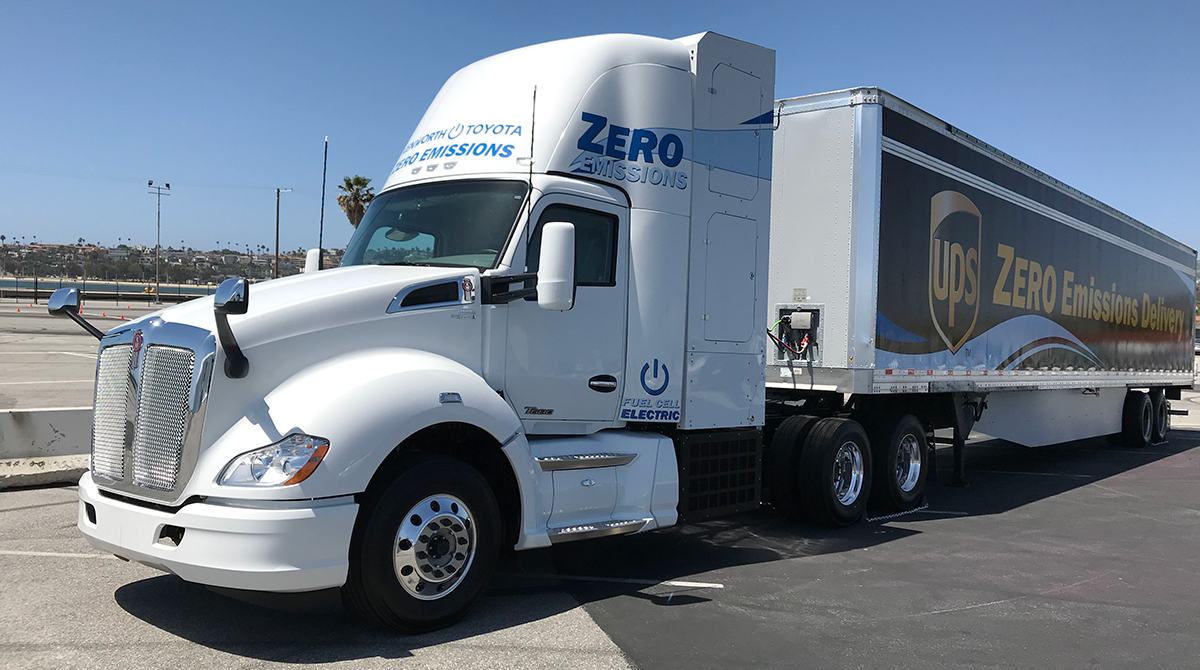 One of the Class 8 trucks that will run using hydrogen fuel cells on display at the event. (Truck PR/Flickr)

The trucks were displayed at the Port of Los Angeles on Earth Day in front of about 200 government, port, business and trucking officials, an event held before the Advanced Clean Transportation Expo on April 23-26.

The Kenworth T680 Class 8 models were used to build the 10 trucks — known as fuel cell electric trucks — that will be implemented in the Los Angeles area as part of a pilot program, running freight from the ports of Los Angeles and Long Beach to spots in Southern California. The trucks will be used by UPS Inc., Toyota Motor Corp., Southern Counties Express and Total Transportation Services. 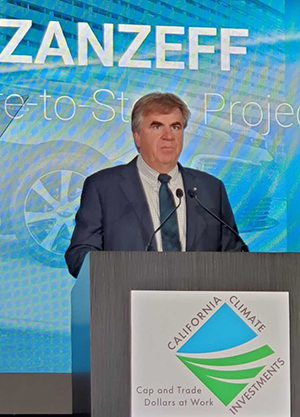 The trucks have a range of 300 miles, and the hydrogen fuel can be refilled as fast as a diesel tank can, officials said. The zero-emissions trucks, which run quietly, have the “potential literally to change the air we breathe,” said Robert Carter, executive vice president of automotive operations for Toyota Motor North America.

And the trucks are all business, too, with 560 horsepower, he said.

The program is part of the Zero and Near-Zero Emissions Freight Facilities Project, an effort by California to reduce emissions in an area of the state where hydrocarbon waste doesn’t dissipate easily.

To assist with the expensive production and implementation of the pilot, the California Air Resources Board awarded $41 million to the Port of Los Angeles for the ZANZEFF project as part of California Climate Investments, a state initiative that puts billions of cap-and-trade dollars to work reducing greenhouse gas emissions.

Testing began in April 2017, and the trucks have logged more than 14,000 miles of testing and real-world drayage operations in and around the ports of Los Angeles and Long Beach while emitting nothing but water vapor, according to Toyota spokesman Russ Koble.

Toyota and Kenworth officials said the first Kenworth-Toyota fuel cell electric truck will begin drayage operations in the fourth quarter of this year.

The initiative will help reduce emissions by more than 500 tons of greenhouse gas and 0.72 weighted tons of nitrogen oxide and other emissions.

For now, Toyota, Kenworth and port officials acknowledge the effort is a “drop in the bucket.” More than 16,000 trucks serve the Los Angeles and Long Beach port complexes, North America’s largest trade gateway for containerized cargo, according to port officials — and that number is estimated to grow to 32,000 by 2030.

But port officials said they were optimistic. The Port of Los Angeles already has reduced diesel particulate matter by 87%, meeting its 2023 goal of a 77% reduction. Nitrogen oxides also are down 58%, almost meeting the 2023 goal of a 59% reduction. The reductions are all the more impressive given that the port’s traffic as measured by 20-foot equivalent units is expected to rise by 19% by 2023, said Chris Cannon, the Los Angeles port’s chief sustainability officer.

The Earth Day unveiling was an unofficial kickoff to the ACT Expo. The event is an annual showcase of environmental policies, sustainability strategies, and green technologies and fuels.