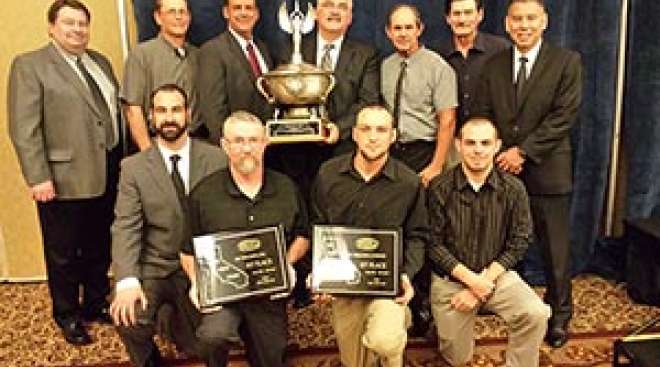 JSG Trucking works hard to keep California’s roads safe, and they have the awards to prove it.

Over the past 20 years, the Acampo, Calif.-based trucking company has brought home a number of top scores from the California Trucking Association’s Fleet Safety Awards.

This year, they also added a third, the coveted Board of Directors Grand Trophy, to that list, making them one of just two California trucking companies out of more than 2,700 to earn that honor.

The key to their success?

“Our employees care about what they do and they bring their A game every day,” said Joe Giammona, president of JSG Trucking.

The company works hard to ensure that their trucks are well-maintained, their drivers have up-to-date safety training, and everyone knows what they should be doing to keep the roads safe, Giammona said. But in the end, it’s up to the employees who maintain the trucks, the dispatchers who coordinate everything, and the drivers themselves who make the decisions on the road.

“They’re the ones who achieved this, not me or any senior staff. Our employees — this is a great accomplishment for them,” he said.

JSG Trucking has been in Acampo, right on the edge of Lodi, since the late 1970s — most of the company’s 42 years. While they carry freight throughout the state and sometimes even into California’s neighbors, most of their trucks stay pretty close to home.

“Our drivers are home every night,” Giammona said.

Their cargo is generally steel used for manufacturing cans used for items such as tomatoes, along with food processing materials and structural steel, he said.

For the past 20 years, JSG has entered the Fleet Safety Awards every year, and has placed well every time, Giammona said.

The awards aren’t just an industry event. An independent council made up of DMV employees, California Highway Patrol officers and officials, outside consultants and CTA staff judges each entry.

“It’s a blind judge, where your name isn’t on the documents they judge,” Giammona said.

Before the documents even get to the judgment stage, CTA officials visit each company to make sure they’re taking the safety precautions they say they are. They do a visual inspection of the fleet and check drivers’ logbooks.

They also verify the company’s accident and injury record, record the number of miles driven, and investigate the safety and maintenance programs.

To win the award, JSG Trucking was up against more than 2,700 other California trucking firms.

“It’s all sizes of fleets that belong to CTA, anywhere from a one or two truck owner to the FedExes of the world,” Giammona said.

In addition to the Board of Directors Grand Trophy, JSG Trucking earned first place in the Flatbed Division and second place in the Truckload Division.

But while the win is exciting, JSG’s main goal is for each day to be as boring as possible, Giammona said. A day with no incidents or accidents is the target.

“Everyone comes back healthy and gets to go home to their families. That’s our goal every day,” he said.