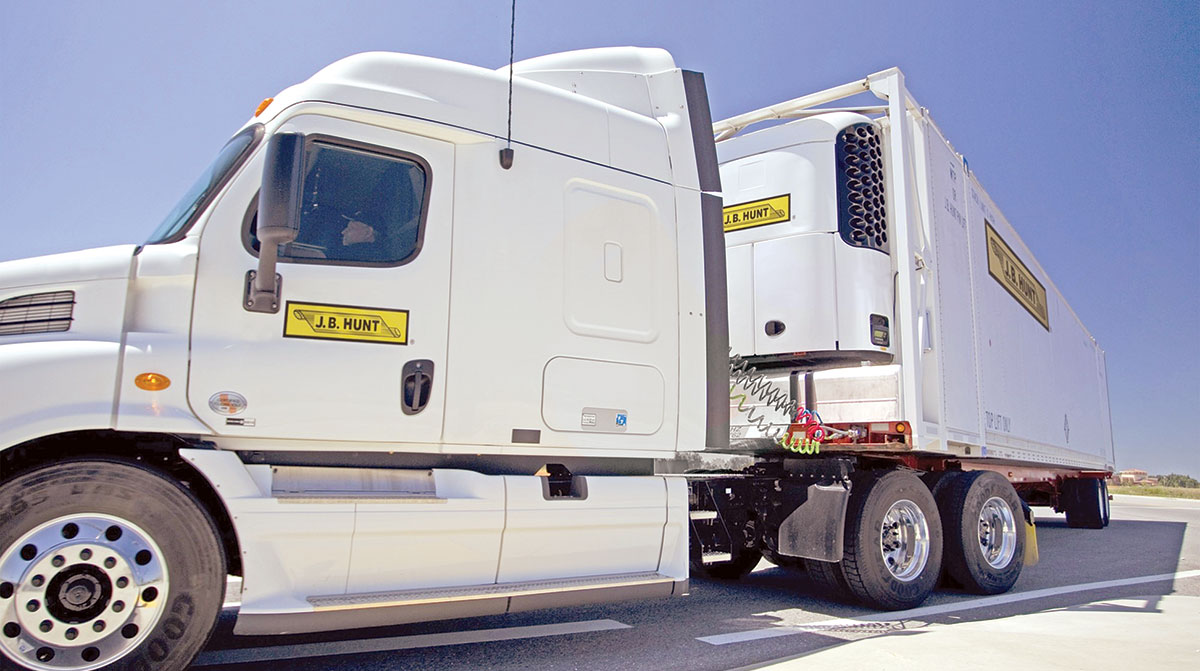 J.B. Hunt increased its net income by more than $250 million in 2021 compared with the year before. (J.B. Hunt Transport Services Inc.)

The company noted in the report that all segments contributed to Q4 2021 revenue growth versus the prior-year period, spurred by J.B. Hunt 360. Total freight transactions in the marketplace increased 27% to $593 million compared to $468 million in Q4 2020.

• Truckload segment revenue for Q4 increased 85% to $259.1 million from $140.4 million in the year-ago period. Results were driven by a 32% increase in revenue per loaded mile and a 19% gain in average length of haul, related to the continued net trailer additions and expansion of J.B. Hunt 360box, which leverages the J.B. Hunt 360 platform to access drop-trailer capacity.

Operating income for the truckload segment increased 210% to $25.9 million from $8.4 million the prior year. This was driven by increased load counts and revenue per load that were partially offset by increases in purchased transportation expense, higher driver wages and recruiting costs.

• Final Mile Services reported revenue increased 4% to $222 million from $213.2 million. Stop count within the segment decreased 22% from a year ago. The addition of multiple customer contracts implemented over the prior year more than offset the reduction of stops due to labor shortages and supply chain constraints. Revenue per stop increased approximately 33%.

Operating income for the segment increased 35% over the prior-year quarter to $7.4 million from $5.5 million. That includes a $5.7 million benefit from the reduction of a contingent liability, which drove most of the increase.

• Integrated Capacity Solutions reported revenue increased 26% to $739 million from $587.3 million. Revenue growth primarily was driven by a 27% increase in revenue per load resulting from changes in customer freight mix and higher contractual and spot rates in the truckload business.

ICS operating income increased 280% to $21.2 million from $5.6 million the prior year. Benefits from higher gross margin partially were offset by higher personnel and technology costs. Gross profit margins increased to 12.2% versus 10.8% in the prior period. The segment carrier base increased 36%

• Dedicated Contract Services reported revenue increased 25% to $712.4 million from $568.3 million a year earlier. Revenue per truck per week increased about 7%. Productivity increased 2%, primarily from contracted indexed-based price escalators partially offset by lower productivity on start-up accounts and a greater number of open trucks due to the tight labor market and labor disruptions related to the pandemic. A net additional 1,778 revenue producing trucks were in the fleet by the end of the quarter compared with the prior year.

• Intermodal reported revenue increased 26% to $1.57 billion from $1.25 billion. Volumes declined 3% over the same period in 2020. The report noted that while demand for intermodal capacity remains strong, network fluidity challenges remained. But despite these volume-related headwinds, a 30% increase in revenue per load resulting from changes in the mix of freight, customer rates and fuel surcharge revenues drove revenue increases.

Operating income for the segment increased 76% to $195.3 million from $110.8 million. This was driven by a higher customer rate, and cost recovery efforts partially were offset by higher rail and third-party dray purchased transportation costs, wages and benefits increased, higher driver recruiting costs and activity-based costs incurred.