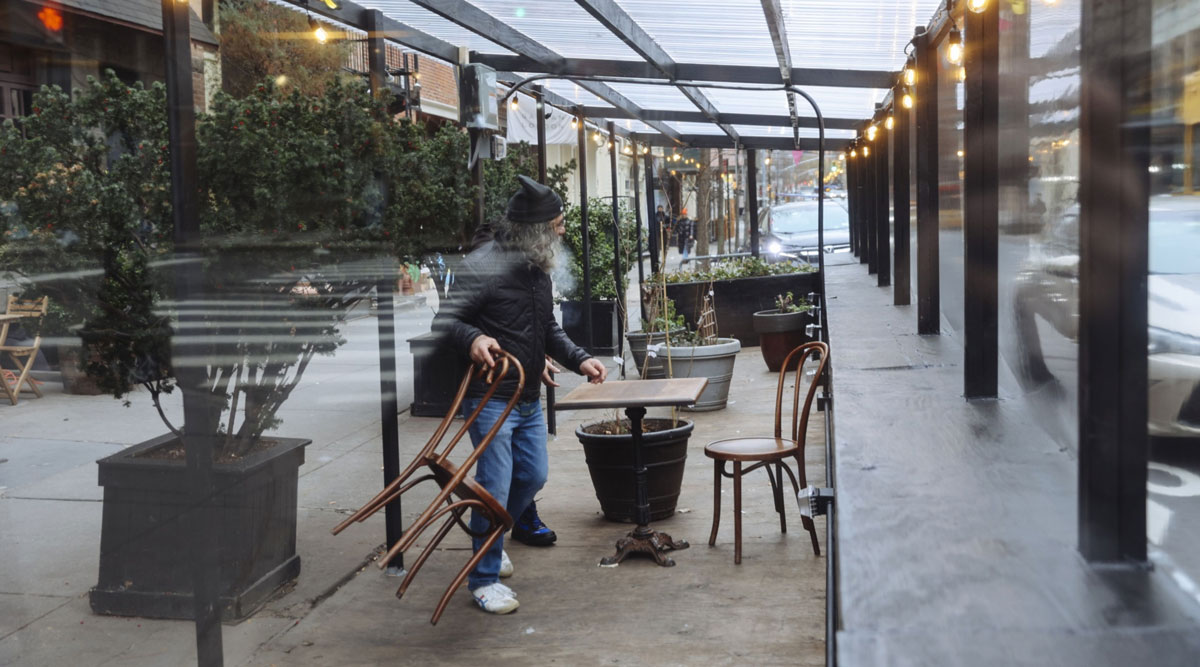 A worker removes chairs from the outdoor dining tent of a restaurant in New York. (Angus Mordant/Bloomberg News)

Applications for U.S. state unemployment benefits were little changed at elevated levels in the final week of 2020, indicating the labor market remains battered with the pandemic dragging on.

Continuing claims for state programs — a rough approximation of the number of people receiving those benefits — declined by 126,000 to 5.07 million in the week ended Dec. 26. A Bloomberg survey of economists had called for 800,000 initial state claims and 5.2 million continuing claims on an adjusted basis.

The data tend to be more volatile around holiday weeks such as those containing Christmas and New Year’s Day. 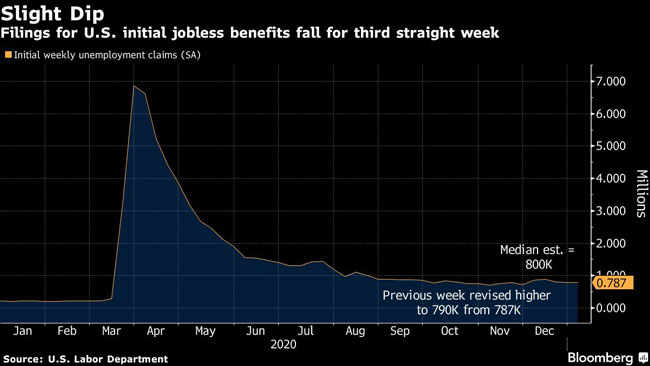 While initial claims dropped for a third consecutive week, the figures underscore a labor-market rebound that remains fragile, with the Jan. 8 jobs report expected to show a sharp slowdown in December hiring. The surge in COVID-19 cases sparked a wave of renewed restrictions on businesses and activity, spurring businesses to cut jobs.

“The current wave of infections is weighing on activity,” Michael Feroli, chief U.S. economist at JPMorgan Chase & Co., told Bloomberg Television on Jan. 7. “What we are seeing, I think pretty clearly, is a notable deceleration in the labor market over the last several weeks.”

U.S. stocks opened higher and 10-year Treasury yields rose following the report, as investors focused on the prospect for more economic stimulus and the likelihood that calm will prevail as Joe Biden takes the presidency following the Jan. 6 violence at the U.S. Capitol.

The recently signed $900 billion pandemic aid package will provide some relief for workers and businesses in the wait for widespread vaccinations. The law extended jobless benefits for millions of Americans poised to lose that financial support at the end of 2020. It also provided an additional $300 per week in unemployment aid through mid-March.

One of the programs set to expire, Pandemic Unemployment Assistance, saw 161,460 initial claims last week, a decline of almost half from the prior week. The program provides jobless benefits to those not typically eligible like the self-employed and gig workers. There were 8.38 million continued weeks claimed for PUA in the week ended Dec. 19, down slightly from the prior week.

In the same week, there were 4.52 million continuing claims for Pandemic Emergency Unemployment Compensation, which provides extended jobless benefits for those who have exhausted their regular state benefits. Like PUA, the federal program was set to expire at the end of 2020 without congressional action. The number of Americans who are considered long-term unemployed was at a seven-year high of nearly 4 million in November.

The increase in unadjusted state initial claims reflected jumps in Colorado, Kansas, Louisiana, Virginia, Texas and Georgia. Filings in Illinois fell by more than half, to about 48,000 after four weeks of posting more than 100,000 claims a week.

State Jobless Claims in US Fall to Lowest Since March 2020

US Jobless Claims Jump by Most Since March, Approach 1 Million