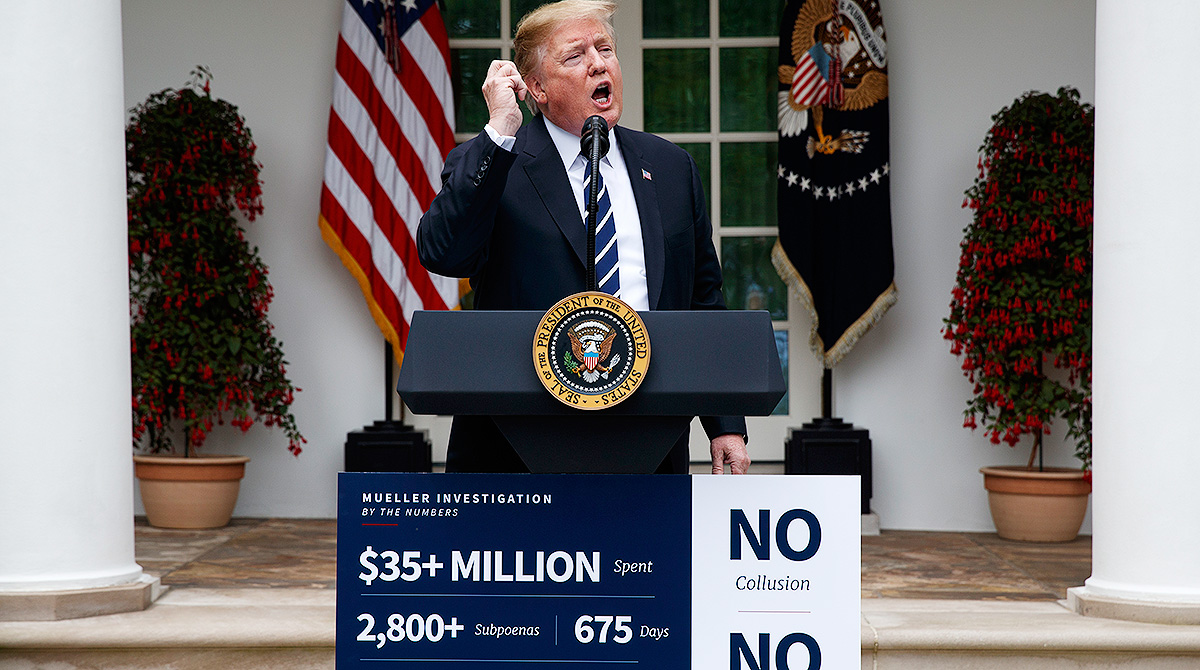 After the meeting with congressional Democrats, President Donald Trump delivers a statement in the Rose Garden. (Evan Vucci/AP)

After the collapse of a highly anticipated White House meeting between President Donald Trump and Democratic leaders to craft a plan for funding a $2 trillion infrastructure plan, Capitol Hill leaders raised questions about a viable path forward while stakeholders continued to express hope that Congress could rise above partisan disputes and advance an infrastructure policy measure this year.

The president’s attention has now turned to the reauthorization of a 2015 highway law that expires in the fall of 2020, which Trump has promoted as the ideal vehicle for broad infrastructure provisions. 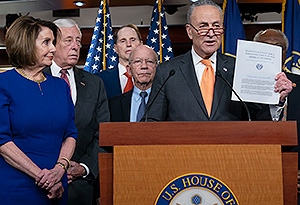 Trump told reporters at the White House that the May 22 meeting between himself, Speaker of the House Nancy Pelosi (D-Calif.) and Senate Minority Leader Chuck Schumer (D-N.Y.) came to a halt after he raised concerns about ongoing congressional investigations into his 2016 campaign.

“I walked into the room, and I told Sen. Schumer, Speaker Pelosi, ‘I want to do infrastructure. I want to do it more than you want to do it. I’d be really good at that. That’s what I do. But you know what. You can’t do it under these circumstances. So get these phony investigations over with,’ ’’ Trump said.

Shortly after the president’s remarks, Pelosi said that Trump “took a pass” on the thorny issue of funding a comprehensive infrastructure policy package. “Unfortunately, the president isn’t ready for that,” she told reporters on Capitol Hill.

Added Schumer, “We are interested in doing infrastructure. It’s clear the president isn’t. He is looking for every excuse.”

Last month, Trump and Democrats agreed to proceed with a $2 trillion infrastructure package and planned to discuss potential ways to pay for it at a later date. The May 22 meeting was called to hold those discussions.

Rep. Peter DeFazio (D-Ore.), chairman of the House transportation committee, said he intends to proceed with myriad policy measures, but questioned whether his chamber will get the chance to consider long-term surface transportation legislation this year absent the president’s backing.

“Unfortunately, it doesn’t look like we’re going to do a shorter-term major infrastructure investment, but I still remain hopeful and I’m ready to go back to the White House if the president comes to his senses,” DeFazio told Transport Topics.

The committee’s top Republican, Missouri Rep. Sam Graves, told TT he did not blame the president for opting out of the infrastructure meeting. “When you see Nancy Pelosi make the outrageous statements that she made this morning and then turn around and want to play nice and pretend that she didn’t do that. I mean, that’s very disingenuous,” said Graves.

Just before meeting with Trump, Pelosi listened to concerns from members of her caucus about the president’s conduct, including claims that the president was engaging in a cover-up related to the findings in a report from Special Counsel Robert Mueller as well as subsequent responses to congressional subpoenas. A growing number of House Democrats have expressed support for impeaching the president.

Industry stakeholders urged leaders on both sides of the aisle to set aside their political divides and focus on rebuilding the nation’s infrastructure.

“With the unpredictability of today’s political climate in Washington, the only certain forecast is that our nation’s roads and traffic will get worse, the economy will slow, and fewer Americans will have jobs until politicians step up and address this critical issue,” said Chris Spear, president of American Trucking Associations.

“Absent congressional action or a new revenue stream, states could face a 40% cut in investment starting in 2021,” added Dave Bauer, president of the American Road and Transportation Builders Association.

Analysts have concluded that a federal account that relies on dwindling revenue from fuel taxes to assist states with highway construction and maintenance projects will be insolvent in about two years. ATA and the U.S. Chamber of Commerce have both endorsed increases in fuel taxes to boost funding for infrastructure improvements.

"Every day, the cost of federal inaction grows. We urge Congress and the President to immediately resume discussions on America’s failing infrastructure. The time to act is now." #InfrastructureNow https://t.co/rWEdWlPdWN — U.S. Chamber (@USChamber) May 22, 2019

In a statement, Chamber president Tom Donohue said Trump and Congress should resume their negotiations immediately.

“Despite today’s distractions, we remain encouraged by the progress that has been made to fix our country’s failing infrastructure, and we remain committed to getting the job done for America’s families, workers and businesses,” he said.

During a private meeting with transportation leaders in 2018, Trump is said to have endorsed a fuel tax increase to back infrastructure programs. The White House has not denied the claim.

On the eve of the May 22 meeting, Trump urged Congress to approve his administration’s new trade deal with Mexico and Canada before working on an infrastructure measure. Trump also signaled support for relying on the reauthorization of a 2015 highway law as the vehicle for comprehensive infrastructure policy. That law expires next year.

“The Highway Trust Fund is essentially bankrupt and needs to be reauthorized by September 2020. Hence, we believe that reauthorization is the best vehicle to achieve our goals,” Trump said May 21.

Thousands of infrastructure funding proponents met in Washington during the week of May 13 for a forum referred to as Infrastructure Week. Stakeholders — from trucking executives and business leaders, to the construction sector and transit operators — urged Trump and Congress to advance an infrastructure package this year that would ensure long-term funding.