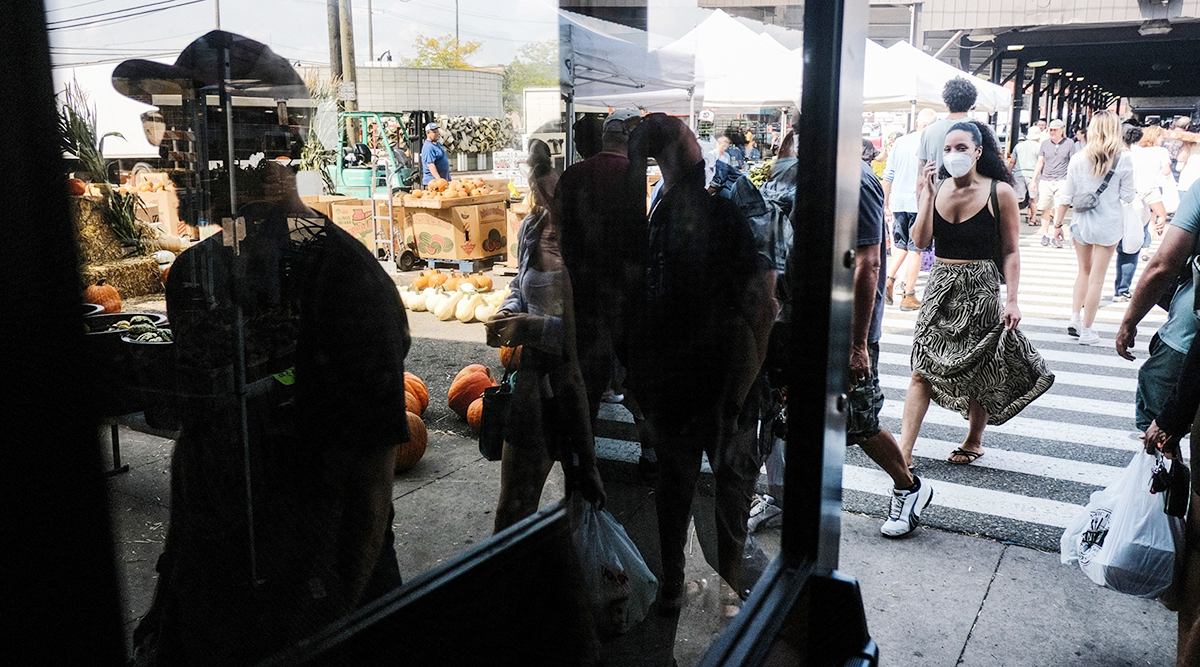 Shoppers at the Eastern Market in Detroit. The high prices and hiked interest rates that consumers have faced due to inflation may be on their way down, according to data for October. (Matthew Hatcher/Bloomberg News)

U.S. inflation cooled in October by more than forecast, offering hope that the fastest price increases in decades are ebbing and giving Federal Reserve officials room to slow down their steep interest rate hikes.

The consumer price index was up 7.7% from a year earlier, the smallest annual advance since the start of the year and down from 8.2% in September, according to a Labor Department report Nov. 10. Core prices, which exclude food and energy and are regarded as a better underlying indicator of inflation, advanced 6.3%, pulling back from a 40-year high.

The core consumer price index increased 0.3% from the prior month, while the overall CPI advanced 0.4%. Both increases as well as the monthly rises were below the median economist estimates.

“I think the underlying elements of this report are actually good, they’re supportive, there’s some evidence that we’re moving from peak inflation down lower,” Matthew Luzzetti, chief U.S. economist at Deutsche Bank AG, said on Bloomberg Television. “Where do we end up I think is the big question.”

While the deceleration in core prices is welcome news, inflation remains much too high for comfort for the Fed. Chair Jerome Powell, who said this month that officials need to see a consistent pattern of weaker monthly inflation, also indicated rates will likely peak higher than policymakers previously envisioned.

Declines in the price gauges for medical care services and used vehicles restrained the core measure. Higher shelter costs contributed to more than half of the increase in overall CPI.

Treasury yields plunged while the S&P 500 soared at the open and the dollar index tumbled. Traders moved closer to pricing in a half-point Fed hike in December, rather than 75 basis points, and cut to below 5% where they see the peak rate coming next year. 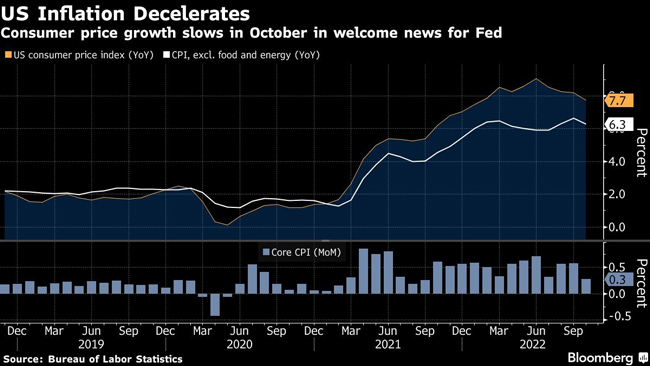 Two Fed officials on Nov. 10 argued for moderating the pace of rate increases. Patrick Harker, who heads up the Philadelphia Fed, said that he expects the central bank to “slow the pace of our rate hikes as we approach a sufficiently restrictive stance.” At a separate event, Dallas Fed President Lorie Logan said the CPI report was “a welcome relief, but there is still a long way to go.”

The median estimates in a Bloomberg survey of economists called for a 0.6% monthly gain in the CPI and a 0.5% advance in the core.

Fed officials will have both another CPI report and jobs report in hand before the end of their two-day policy meeting in mid-December.