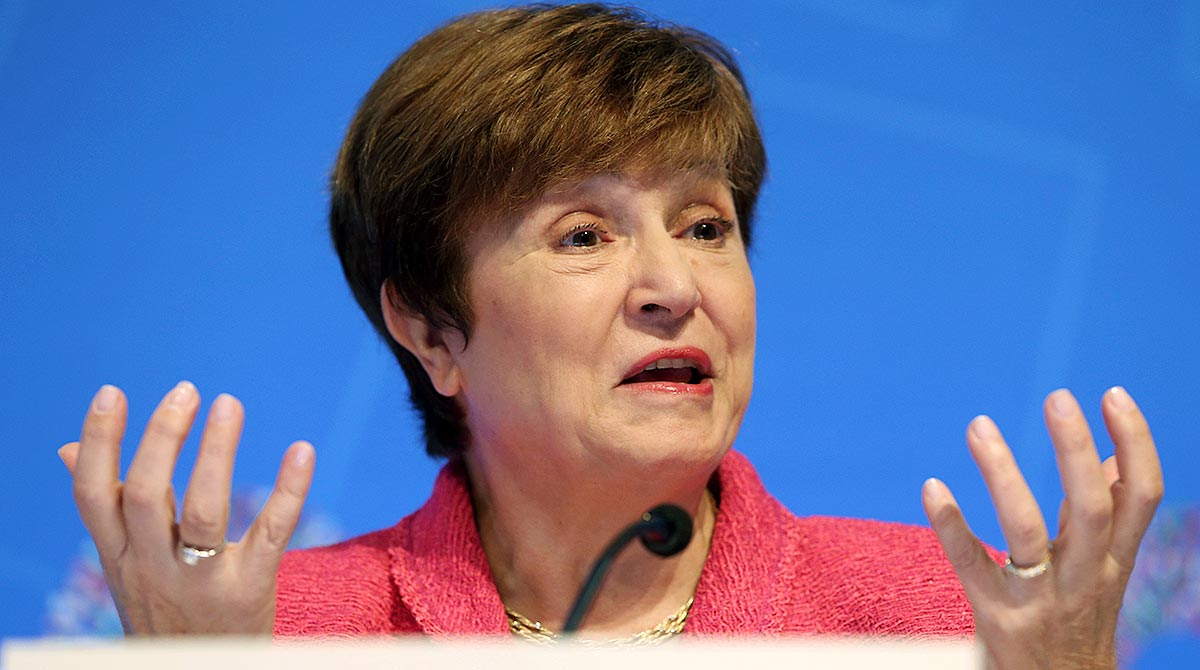 WASHINGTON — The leaders of the International Monetary Fund and the World Bank appealed to their 189 member countries Oct. 18 to resolve widening disagreements on trade and other issues, warning that the divisions threatened to make the consequences of a global slowdown even worse.

IMF Managing Director Kristalina Georgieva said a variety of factors were taking a toll from a trade war that has engulfed the world’s two biggest economies, the United States and China, to spreading weakness in Europe linked to Brexit and rising geopolitical tensions in the Middle East. 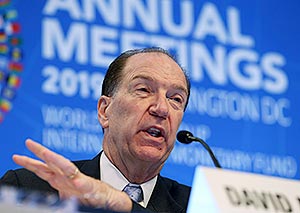 “Trade tensions are now taking a toll on business confidence and investment,” she said in her opening address to the finance officials.

World Bank President David Malpass said the slowdown in global growth was hurting efforts to help the 700 million people around the globe mired in extreme poverty, especially in nations trying to cope with a flood of refugees from regional conflicts.

“Many countries are facing fragility, conflict and violence, making development even more urgent and difficult,” he said.

In her remarks, Georgieva, a Bulgarian economist who had been the No. 2 official at the World Bank, recognized the accomplishments of her IMF predecessor, Christine Lagarde, the first woman to head IMF, who was in the audience for the speech.

“As someone who grew up behind the Iron Curtain, I could never have expected to lead the IMF,” Georgieva said, noting that she had personally witnessed the devastation of bad economic policies when her mother lost 98% of her life savings during a period of hyperinflation in the 1990s in Bulgaria.

She said the world currently was caught in a synchronized slowdown, with nearly 90% of the global economy experiencing weaker growth this year. Because of this, IMF projected earlier this week that global growth would only reach 3% this year, the weakest performance in a decade.

The IMF and World Bank meetings were expected to be dominated by the trade disputes that were triggered by the Trump administration’s get-tough policies aimed at lowering America’s huge trade deficits and boosting U.S. manufacturing jobs. So far those efforts have made little headway.

French Finance Minister Bruno Le Maire told reporters at IMF that the real winner of a trade war between the United States and the European Union likely would be China. He said the EU was ready to negotiate a settlement to avoid the tariffs, but so far the United States has rejected those efforts.

“From the very beginning, we have made it very clear that we want to avoid a trade war,” Le Maire said. “The response from the U.S. administration has always been a closed door.”

Georgieva said Oct. 17 that a tentative U.S.-China trade agreement announced last week should lessen slightly the damage done by the trade wars — but until the two nations resolved their differences, it would not remove enough uncertainty to return the globe to solid growth.

“Our hope is to move from a trade truce to a trade peace,” she told reporters.

.@KGeorgieva: We need to move from trade truce to trade peace. Working together to find a lasting solution on trade and keeping tensions from spilling over into other critical areas, such as currencies and technology. https://t.co/rNslXRltdt #IMFmeetings pic.twitter.com/H9kdV7Su18 — IMFLive (@IMFLive) October 18, 2019

Georgieva said she hoped this week’s talks would focus on ways to ease trade tensions and begin the groundwork to update the rules of world trade. The Trump administration has repeatedly attacked the Geneva-based World Trade Organization, saying it is biased against the United States.

“We have been reaching agreements on trade based primarily on the past,” she said. She noted that global commerce has been transformed in recent years by advances in technology, and those advances need to be acknowledged in new trade rules.

In the announcement last week, Trump said he was suspending a tariff increase on $250 billion of Chinese products that had been scheduled to take effect this week.

Treasury Secretary Steven Mnuchin told reporters Oct. 16 that the U.S. and Chinese negotiators were working to finalize details on this “phase one” agreement with a goal of having a deal that Trump and Chinese President Xi Jinping can sign at the Asia Pacific Economic Cooperation summit in mid-November.