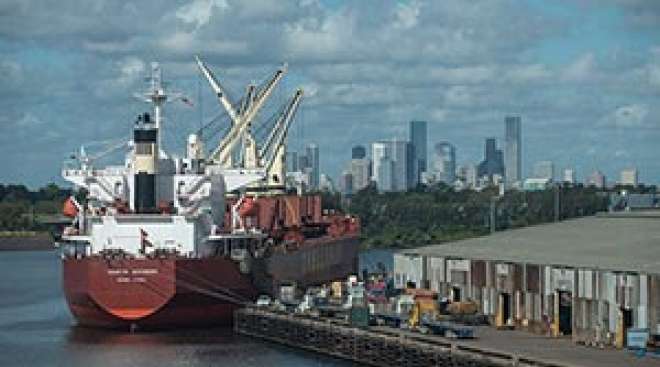 Some manufacturers are concerned that regional infrastructure won't be prepared for the impending influx of petrochemical-related cargo through the Port of Houston, a topic discussed Nov. 2 during the Harris County International Trade and Transportation Conference.

Roads and bridges around the port are already congested, said Scott Campbell, associate director at LyondellBasell Industries, and improvements are unlikely to occur before petrochemical plant projects come online.

"The infrastructure that we need is not there," he said. "The challenge is how fast can we get that stuff in place?"

About 350 people attended the eighth annual Harris County International Trade and Transportation Conference at NRG Center. While the event's theme championed collaboration, there were clashing ideas on the best way to move freight — either by increased reliance on trains or by allowing trucks to carry heavier loads.

He said Union Pacific operates 100 trains a day in Harris County, meaning there are roughly 15,000 fewer trucks clogging the roads.

He acknowledged that a combination of trucks and trains is needed in settings like the port, but he said he opposes allowing heavier trucks on the roads. These trucks could cause more damage to roadways without paying their fair share to repair them.

"Pay your own way. We pay our own way," he said, emphasizing that Union Pacific maintains its own railroads.

Perry Padden, the Americas logistics and distribution manager for Exxon Mobil Chemical, advocated for trucks carrying heavier containers to and from the port, to be loaded onto or off ships.

He said it's more expensive to ship containers around the world when they aren't completely full.

Padden said the port is at a disadvantage because it does not have a dedicated corridor for trucks carrying heavier loads.

Harris County Judge Ed Emmett encouraged attendees not to think in terms of trucks versus rail. These different types of transportation will continue working together to move freight, he said.

When asked if Harris County infrastructure will be able to handle the impending petrochemical boom, Emmett said a lot of that cargo will be moved by rail. Because of private investments, rail has extra capacity to move more freight.

He agreed that Harris County is playing catch-up on the trucking side. He said there was inadequate funding for road projects until recently when voters approved a dedicated funding source for the Texas Department of Transportation.

He said events like the Nov. 2 conference ultimately will help address the county's infrastructure needs for moving freight.

"Because of groups like these, we're better off than a lot of places," he said.

Roger Guenther, executive director of the Port of Houston Authority, also addressed the need for collaboration. The port can't prepare its roads and other infrastructure for growth in a vacuum, he said.

Instead, Guenther recommended looking for opportunities or grants where the community could come together to improve infrastructure. For instance, the Port Authority recently helped the county receive funding for a $13 million project to improve a congested road adjacent to the port.

"If we don't have unity in being together and pushing these projects, we're not going to be as successful," he said.