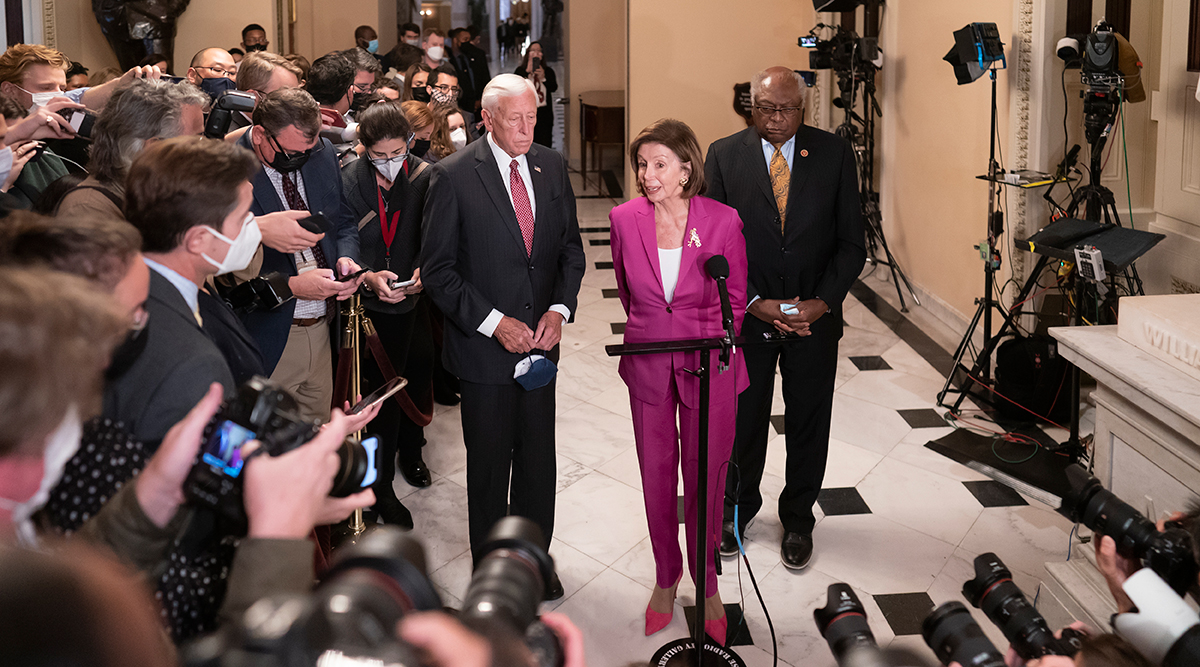 WASHINGTON — The House of Representatives approved a $1 trillion package of road and other infrastructure projects late Nov. 5 after Democrats resolved a monthslong standoff between progressives and moderates, notching a victory that President Joe Biden and his party had become increasingly anxious to claim.

The House passed the measure 228-206.Thirteen Republicans, mostly moderates, supported the legislation while six of the Democrats' farthest left members — including Reps. Alexandria Ocasio-Cortez of New York and Cori Bush of Missouri — opposed it.

Included in the legislation is a five-year reauthorization of a 2015 highway policy law, as well as the DRIVE Safe Act that would pave the way for drivers 18-20 years old to operate trucks on interstate highways following the completion of training via an apprenticeship.

Passage of the bill, which would create legions of jobs and improve broadband, water supplies and other public works, whisked it to the desk of a president whose approval ratings have dropped and whose nervous party got a cold shoulder from voters in this week’s off-year elections.

Democratic gubernatorial candidates were defeated in Virginia and squeaked through in New Jersey, two blue-leaning states. Those setbacks made party leaders — and moderates and progressives alike — impatient to produce impactful legislation and demonstrate they know how to govern. Democrats can also ill-afford to seem in disarray a year before midterm elections that could result in Republicans regaining congressional control.

Simply freeing up the infrastructure measure for final congressional approval was a like a burst of adrenaline for Democrats. Yet despite the win, Democrats endured a setback when they postponed a vote on a second, even larger measure until later this month.

That 10-year, $1.85 trillion measure bolstering health, family and climate change programs was sidetracked after moderates demanded a cost estimate on the sprawling measure from the nonpartisan Congressional Budget Office. The postponement dashed hopes that the day would produce a double-barreled win for Biden with passage of both bills. 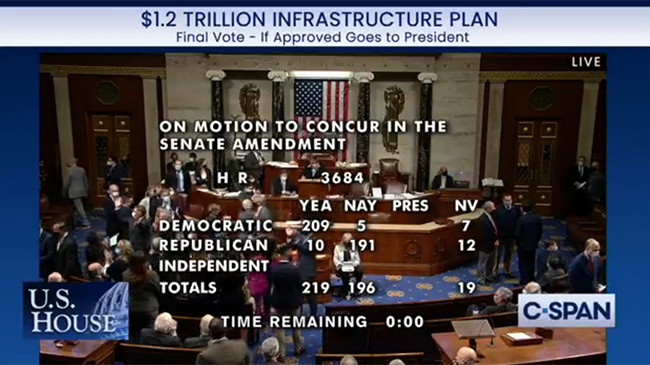 Some members of the House cheer as the 'yays' reach and surpass the 218 total needed for passage. The final vote was 228-206. (c-span.org)

But in an evening breakthrough brokered by Biden and House leaders, the moderates later agreed to back that bill if CBO’s estimates are consistent with preliminary numbers that White House and congressional tax analysts have provided. The agreement, in which lawmakers promised to vote on the social and environment bill by the week of Nov. 15, stood as a significant step toward a House vote that could ultimately ship it to the Senate.

In a two-sentence statement, five moderates said that if the fiscal estimates raise problems, “we remain committed to working to resolve any discrepancies in order to pass the Build Back Better legislation.” The five included Rep. Josh Gottheimer (D-N.J.), leader of a group of centrists who this summer repeatedly pressured House Speaker Nancy Pelosi (D-Calif.) to schedule earlier votes on the infrastructure bill.

In exchange, progressives agreed to back the infrastructure measure, which they’d spent months holding hostage in an effort to pressure moderates to back the social and environment measure.

“As part of this agreement, at the request of the President, and to ensure we pass both bills through the House, progressives will advance” both bills Nov. 5, said Rep. Pramila Jayapal (D-Wash.), leader of the Congressional Progressive Caucus, in a statement.

The White House issued a statement from Biden on Nov. 5 aimed at reinforcing the accord. “I am urging all members to vote for both the rule for consideration of the Build Back Better Act and final passage of the Bipartisan Infrastructure bill tonight,” he said, using the administration’s name for the two measures. “I am confident that during the week of Nov. 15, the House will pass the Build Back Better Act.”

When party leaders announced earlier in the day that the social and environment measure would be delayed, the scrambled plans cast a fresh pall over the party.

Roads and bridges are not political—we all drive on them.

A majority in the House realized this tonight and did what’s right for the country, not themselves. #InfrastructureNowhttps://t.co/Sv846fhocR — American Trucking (@TRUCKINGdotORG) November 6, 2021

Democrats have struggled for months to take advantage of their control of the White House and Congress by advancing their top priorities. That’s been hard, in part because of Democrats’ slender majorities, with bitter internal divisions forcing House leaders to miss several self-imposed deadlines for votes.

“Welcome to my world,” Pelosi told reporters, adding, “We are not a lockstep party.”

The president and first lady Jill Biden delayed plans to travel Nov. 5 to their house in Rehoboth Beach, Del. Instead, Biden spoke to House leaders, moderates and progressives, said a White House official who described the conversations on condition of anonymity.

Among those Biden reached was Jayapal, whose caucus has been at the forefront of delaying the infrastructure measure for leverage. Biden asked her and her 95-member group to back the bill, said a person who recounted the conversation only on condition of anonymity.

Progressives have long demanded that the two massive bills be voted on together to pressure moderates to support the larger, more expansive social measure.