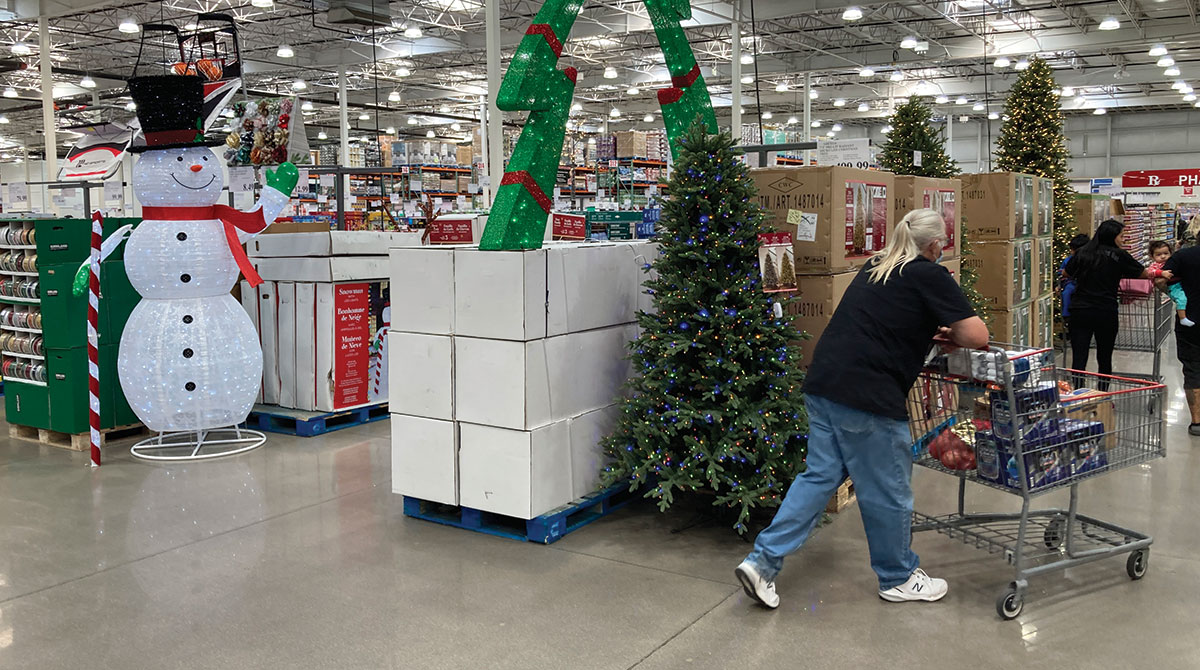 Shoppers pass a display of Christmas items for sale in a Costco warehouse in Thornton, Colo., in September. (David Zalubowski/AP)

The retail holiday season is expected to be solid as economists and other experts say sales should increase between 6% and 8% over 2021’s record 14% increase from 2020. But consumers are likely to be more strategic in the items they buy, especially with inflation eating up some of their purchasing power.

The slower sales, especially when measured against 2021’s breakneck pace, actually may give the supply chain some relief. Stores and online merchants may be better stocked with popular items, even if they cost more than in 2021.

“While consumers are feeling the pressure of inflation and higher prices, and while there is continued stratification with consumer spending and behavior among households at different income levels, consumers remain resilient and continue to engage in commerce,” National Retail Federation President and CEO Matthew Shay said in a statement. “In the face of these challenges, many households will supplement spending with savings and credit to provide a cushion and result in a positive holiday season.”

The 6% to 8% year-over-year sales increase still is well above the 10-year average increase of 4.9%. NRF said that would amount to between $942.6 billion and $960.4 billion from late October through late December.

Online sales continue to increase at double-digit, year-over-year levels, with NRF forecasting online and other nonstore sales, to increase to between $262.8 billion and $267.6 billion compared with $238.9 billion last year (a 10% to 12% rise).

“The overall outlook is generally positive as consumer fundamentals continue to support economic activity. Despite record levels of inflation, rising interest rates and low levels of confidence, consumers have been steadfast in their spending and remain in the driver’s seat,” NRF Chief Economist Jack Kleinhenz said. “The holiday shopping season kicked off earlier this year — a growing trend in recent years —as shoppers are concerned about inflation and availability of products.”

NRF’s holiday forecast is in line with the organization’s full-year forecast for retail sales, which predicted growth between 6% and 8% to more than $4.86 trillion.

Economists say the slower sales numbers, when measured against 2021, could help the transportation industry, which found itself stretched thin in 2021. That largely was due to COVID-19 shutdowns in China and an influx of tens of thousands of full containers backed up at the nation’s ports. At times, dozens of ships waited to be unloaded, especially at the Southern California ports of Los Angeles and Long Beach.

“The traffic at the ports has really gone down in September. If you look at the ports off the coast at the ports of Long Beach and Los Angeles, it was more than 80 to 100 a year ago. Now it’s down to five to 10,” Rajeev Dhawan, director of the Economic Forecasting Center at Georgia State University, told Transport Topics. “We bought what we needed during the COVID-19 pandemic, and there’s not a lot of money left over for what I call mindless shopping. This season they will be very choosy.”

Dhawan said that slower volume levels will work to the advantage of transportation businesses, including the Class I railroads and trucking companies.

“The freight looks fine, but it’s not going to be as crazy as last year,” Dhawan said. “There are still some challenges. Trucking companies are still getting hammered by the high diesel prices, but if you were having a really severe shortage of drivers, it may not be as severe as it was a year ago.”

To that point, American Trucking Associations Chief Economist Bob Costello recently said that the shortage has eased somewhat and that the industry is short an estimated 78,000 drivers compared with 81,000 a year ago.

Meanwhile, diesel prices continue to climb and there are concerns that in some parts of the country, especially the Northeast, diesel and home heating oil could be in short supply, especially if winter is unusually cold.

The national average price of diesel nudged up 1.6 cents to $5.333 a gallon, according to Energy Information Administration data released Nov. 7.

The average price of diesel has increased in four of the past five weeks. The cost of a gallon had risen 50.5 cents over three consecutive weeks before a 2.4-cent drop Oct. 31.

In the Northeast, it is estimated that 20% of homes are heated with home heating oil.

Since 2002, when NRF first began its annual forecast, holiday sales have more than doubled. Consumers in 2002 spent $416 billion on sales. Now that figure is approaching $1 trillion. During that 20-year period, there has been only one time when sales declined year-over-year — during the recession in 2008, when the numbers were down 4.7%.