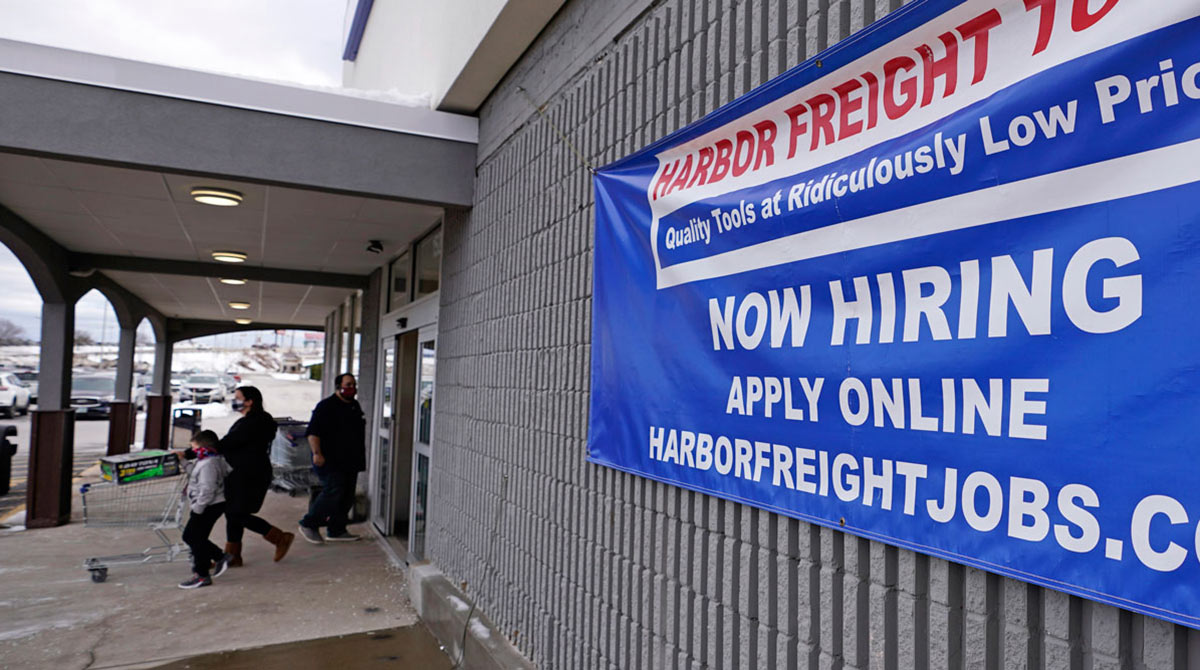 WASHINGTON — America’s employers stepped up their hiring in October, adding a solid 531,000 jobs, the most since July and a sign that the recovery from the pandemic recession may be overcoming a virus-induced slowdown.

The Nov. 5 report from the Labor Department also showed that the unemployment rate fell to 4.6% last month, from 4.8% in September. That is a comparatively low level but still well above the pre-pandemic jobless rate of 3.5%.

The economy’s emergence from the pandemic, by most measures, remains on course. Services companies in such areas as retail, banks and warehousing have reported a sharp jump in sales. More Americans bought new homes last month. And consumer confidence rose in October.

Still, the recovery would gain strength from a sustained acceleration in hiring. The economy grew at a healthy 6.5% annual rate in the first half of the year as vaccinations spread and Americans showed themselves more willing to travel, shop, eat out and attend entertainment events. Yet the delta variant held economic growth in the July-September quarter to just a 2% annual rate and sharply slowed hiring.

Recent economic gauges have cast a hopeful picture. After several rounds of stimulus checks and other government support payments, Americans as a whole have amassed about $2.5 trillion more in savings than they had before the pandemic. As that money is spent, it will likely fuel further economic activity.

The Conference Board, a business research group, said that in its October consumer confidence survey, the proportion of Americans who said they planned to buy cars, homes or major appliances all rose. And nearly half the survey respondents said they planned to vacation in the next six months — the highest such proportion since February 2020, before COVID-19 ripped through the economy.

Yet some companies say they still can’t find enough workers to fill jobs. Many parents, particularly mothers, haven’t returned to the workforce after having left jobs during the pandemic to care for children or other relatives. Defying the predictions of some, the expiration of a $300-a-week federal unemployment supplement hasn’t caused more people to look for work. Roughly 5 million fewer people have jobs now than did before the pandemic.

Most economists say they’re hopeful that with vaccinations helping to suppress the delta wave, more people will seek and find jobs because they’re no longer sick or caring for someone who is or because they no longer fear becoming infected. Those health issues had sidelined more people in September than in previous months.

America’s workers, who now enjoy greater leverage in the job market than they have in decades, are receiving solid pay increases. The draw of higher income could entice more people to come off the sidelines and look for work again. Wages and salaries in the July-September quarter, compared with a year earlier, jumped by the most in 20 years. Most of that gain, though, went to already employed people who left their jobs: The number of people who quit, mostly to take new positions, has reached a record high.

Rising inflation, though, has eroded much of the value of those pay increases and has become the most serious headwind for the U.S. economy. Higher costs for food, heating oil, rents and furniture have burdened millions of families. Prices rose 4.4% in September compared with 12 months earlier, the sharpest such increase in three decades.

That inflation surge was a key reason why the Federal Reserve announced this week that it would begin winding down the stimulus it has given the economy since the pandemic recession struck last year. The Fed will do so by reducing its monthly bond purchases, which have been intended to hold down long-term interest rates to spur borrowing and spending.

Chair Jerome Powell suggested that it won’t be possible to gain a clear picture of the job market’s health until the impact of COVID-19 declines further, which could take months.

Yet in the meantime, there are plenty of signs that the economy is healing: The number of people applying for first-time unemployment benefits fell for a fifth straight week, to a level nearly as low as the pace of jobless claims before the pandemic struck 20 months ago.

And while hiring has slowed for now, consumers as a whole have solid financial cushions. After several rounds of stimulus checks and other government support payments, Americans overall have amassed about $2.5 trillion more in savings than they had before the pandemic. As that money is spent, it will likely fuel further economic activity.