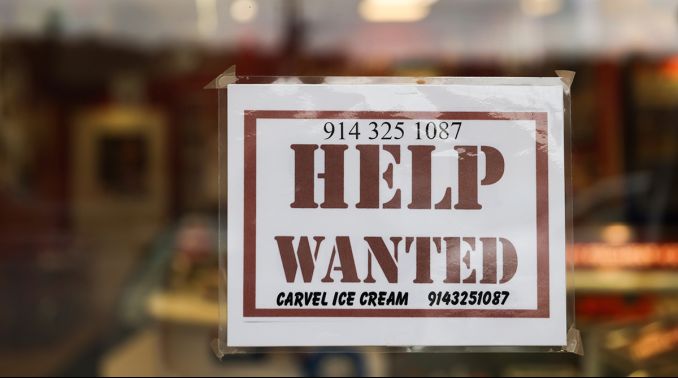 A help wanted sign is displayed in a storefront in Bedford, N.Y. (Julia Nikhinson/Associated Press)

Employers added more jobs than forecast and wages surged by the most in nearly a year, pointing to enduring inflation pressures that boost chances of higher interest rates from the Federal Reserve.

Nonfarm payrolls increased 263,000 in November after an upwardly revised 284,000 gain in October, a Labor Department report showed Dec. 2. The unemployment rate held at 3.7% as participation eased. Average hourly earnings rose twice as much as forecast after an upward revision to the prior month.

The median estimates in a Bloomberg survey of economists called for a 200,000 advance in payrolls and for the unemployment rate to hold at 3.7%. Stocks opened lower and Treasury yields surged as investors anticipated a more aggressive stance from the Fed. 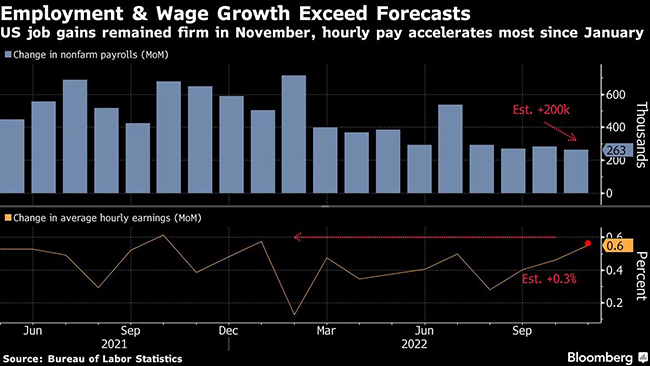 “The net read is that the labor market is still far too tight and cooling only very gradually,” Mizuho economists Alex Pelle and Steven Ricchiuto said in a note. “It suggests that the economy is resilient and can handle more rate hikes and restrictive policy for longer.”

Job gains were concentrated in a few categories, led by growth in leisure and hospitality, health care and government. Meanwhile, employers in retail, transportation and warehousing and temporary help services cut staff.

The better-than-expected payrolls increase underscores the enduring strength of the jobs market despite rising interest rates and concerns of a looming recession. The persistent mismatch between the supply and demand for workers continues to underpin wage growth and has led many economists to expect businesses will be more hesitant to lay off workers in a potential downturn.

That said, some sectors are beginning to show more notable signs of weakening. Many economists expect unemployment to rise next year — significantly in some cases — as tighter Fed policy risks pushing the U.S. into recession.

Fed Chair Jerome Powell said earlier this week that a moderation in demand for labor is needed to bring the jobs market back into balance, and the central bank has only seen “tentative signs” of that so far. He also noted the importance wage growth — and the labor market more generally — will play in determining the path of inflation.

The jobs report showed average hourly earnings rose 0.6% in November in a broad-based gain that was the biggest since January, and were up 5.1% from a year earlier. Wages for production and nonsupervisory workers climbed 0.7% from the prior month, the most in almost a year. The pace of pay raises is inconsistent with the Fed’s 2% inflation target.

This is the last jobs report Fed officials will have in hand before their December policy meeting, where the central bank is expected to step down the pace of interest rate hikes to a still-aggressive half percentage point. Inflation data over the past month have indicated that price pressures are slowly cooling, but remain very elevated.

— With assistance from Augusta Saraiva, Chris Middleton and Catarina Saraiva.