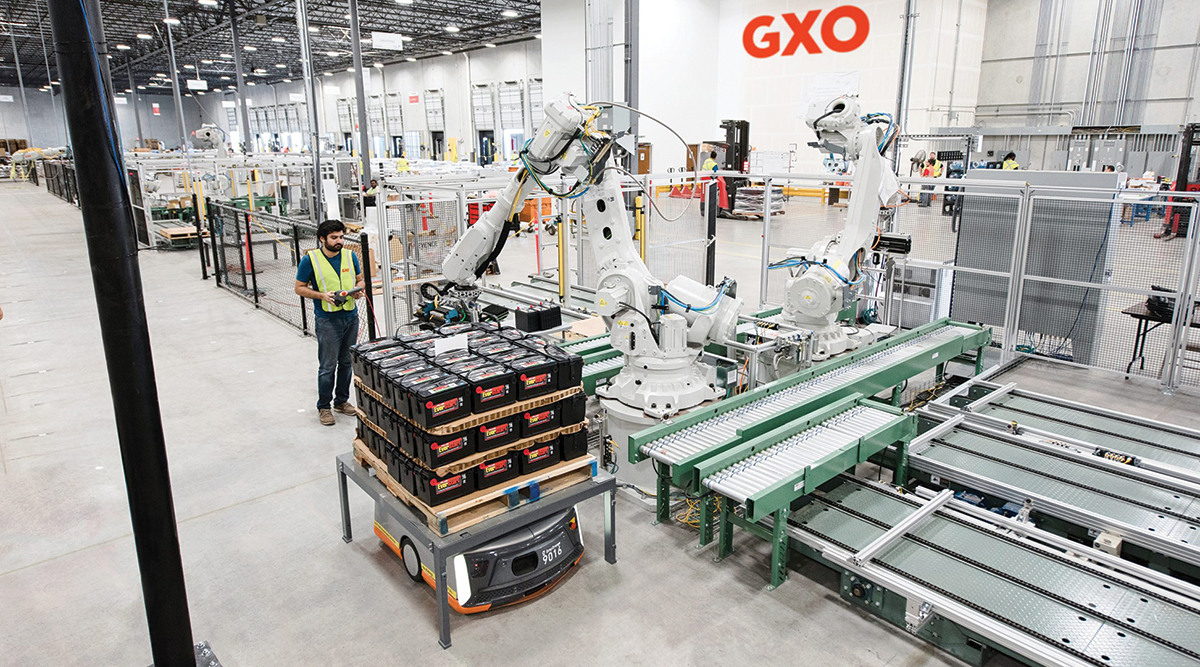 A GXO employee operates a robotic arm at a warehouse. (GXO Logistics)

The Greenwich, Conn.-based contract logistics company posted net income attributable to common shareholders of $56 million, or 48 cents a diluted share, for the three months ending Dec. 31. That compared with $28 million, 24 cents, during the year-ago period when the business was operating within XPO Logistics.

“In the fourth quarter our operations again delivered the highest quarterly revenue and adjusted EBITDA in our history,” Malcolm Wilson, CEO of GXO, said during a call with investors Feb. 16. “We delivered double-digit organic revenue growth in every quarter of 2021. We finished the year with an accelerating trajectory growing at 19%. Moreover, we see great momentum as we have progressed into 2022.”

GXO launched as an independent company Aug. 2. XPO at the time split its contract logistics operations into its own stand-alone company to take advantage of tailwinds related to e-commerce, automation and outsourcing.

“We delivered a successful peak for our customers during the fourth quarter, and we played our role in delivering holiday cheer for millions of consumers,” Wilson said. “We’ve managed the labor market exceptionally well, including recruiting over 20,000 new team members. And we navigated an elongated peak period that ran from mid-November to late December.”

Wilson added that the company helped its customers manage the ongoing e-commerce channel shift. The sales pipeline at the end of the fourth quarter reached a record level at $2.5 billion, with half of those opportunities coming from e-commerce. Wilson noted that through the Thanksgiving weekend, overall e-commerce activity levels were up 100% from the start of the quarter with some facilities handling over half a million outbound e-commerce units per day.

“GXO continues to capitalize on the strong secular tailwinds of e-commerce, automation and outsourcing,” Wilson said. “In 2021, we won contracts with an aggregate lifetime value of approximately $5 billion. This gives us a strong foundation to achieve our 2022 organic revenue growth target of 8% to 12%. And this growth is on an already record 2021 year.”

GXO also has been focused on automation as well as environmental, social and governance (ESG)-focused solutions, both of which are aimed at improving safety and lowering the carbon footprint of global supply chains. The company plans to publish its first sustainability report later in the year.

GXO Logistics Q4 and 2021 Earnings by Transport Topics on Scribd

“At GXO, we believe that being a leader in logistics means making sure that we take care of our partners, people and the planet,” Wilson said. “GXO is bringing significant environmental benefits to customers through our pioneering work on ESG solutions.”

The Q4 earnings results were close to expectations by investment analysts on Wall Street, who had been looking for 56 cents per share and quarterly revenue of $2.05 billion, according to Zacks Consensus Estimate.

GXO saw the most revenue growth for Q4 in e-commerce, omnichannel retail and consumer technology, with those operations increasing 25.5% to $1.2 million from $958 million during the same time the previous year.

Year-over-year revenue increases in other operations: