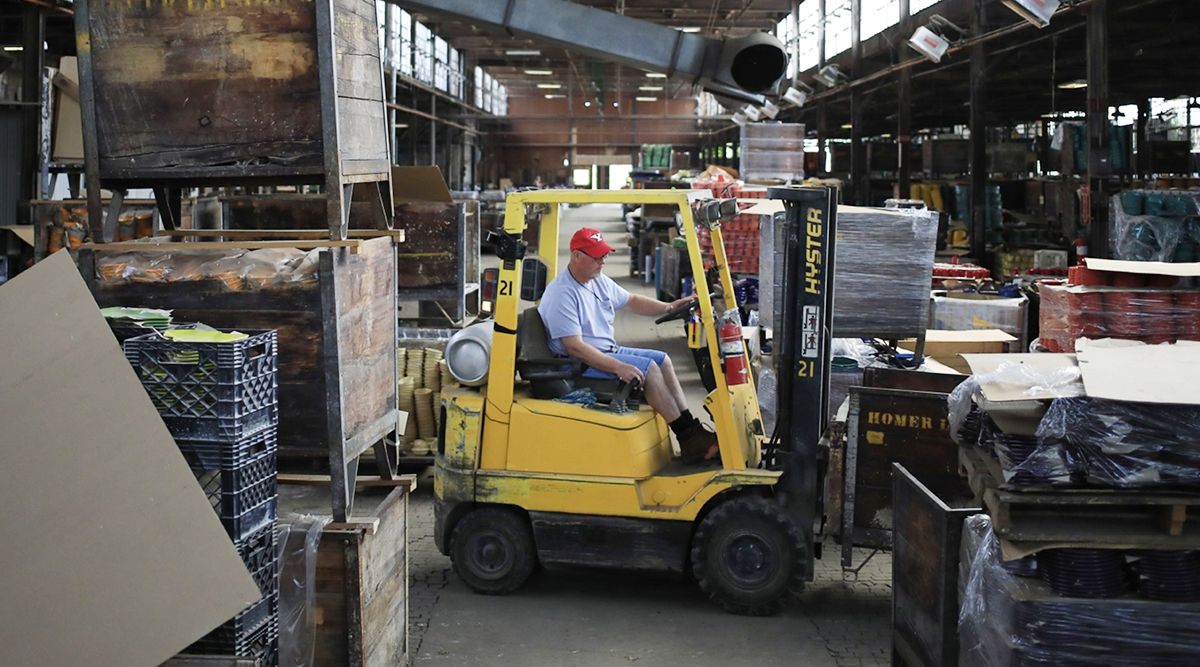 A worker drives a forklift inside a shipping warehouse at the Fiesta Tableware Co. factory in Newell, W.Va. (Luke Sharrett/Bloomberg News)

U.S. business activity continues to downshift, with growth slowing to an eight-month low in August against a backdrop of materials shortages, a lack of labor and an upswing in coronavirus infections.

The IHS Markit flash August composite index of purchasing managers at services and manufacturers dropped to 55.4 from 59.9 a month earlier, the group reported Aug. 23. Readings above 50 indicate growth and the gauge has decreased each month since hitting a record 68.7 in May.

The pullback this month underscores the extent to which supply chain disruptions are hammering firms already struggling to meet demand. Service providers and manufacturers continue to face challenges attracting workers and obtaining the supplies they need. 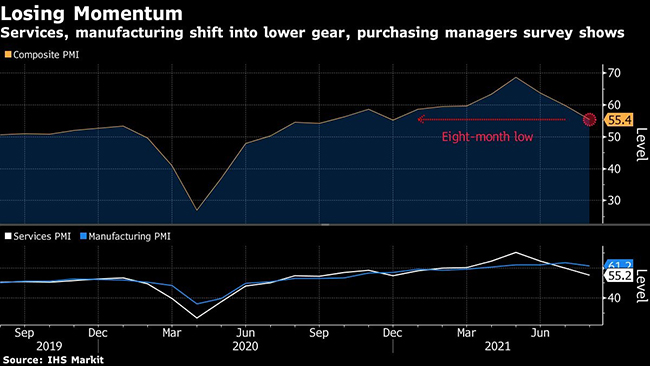 At factories, for instance, an IHS gauge of supplier deliveries showed the longest lead times in records back to 2007.

“Not only have supply chain delays hit a new survey record high, but the August survey saw increasing frustrations in relation to hiring,” Chris Williamson, chief business economist at IHS Markit, said in a statement. “Jobs growth waned to the lowest since July of last year as companies either failed to find suitable staff or existing workers switched jobs.”

Limited capacity is translating into sustained inflationary pressures as well. The group’s composite index of input prices increased in August to the second-highest reading in data back to 2009. A measure of prices received also advanced, indicating companies are having some success passing along higher costs.

The IHS Markit index of services activity declined to show the slowest pace of growth since December, while a measure of new business dropped to a one-year low.

The U.S. services data stand in contrast to developments in Europe. The group’s euro-area PMI showed growth at services exceeding the expansion at factories for the first time since the pandemic began.

The group’s gauge of U.S. manufacturing activity reached a four-month low as output, factory employment and orders cooled. Indexes of both input and output prices climbed to the highest in survey history.