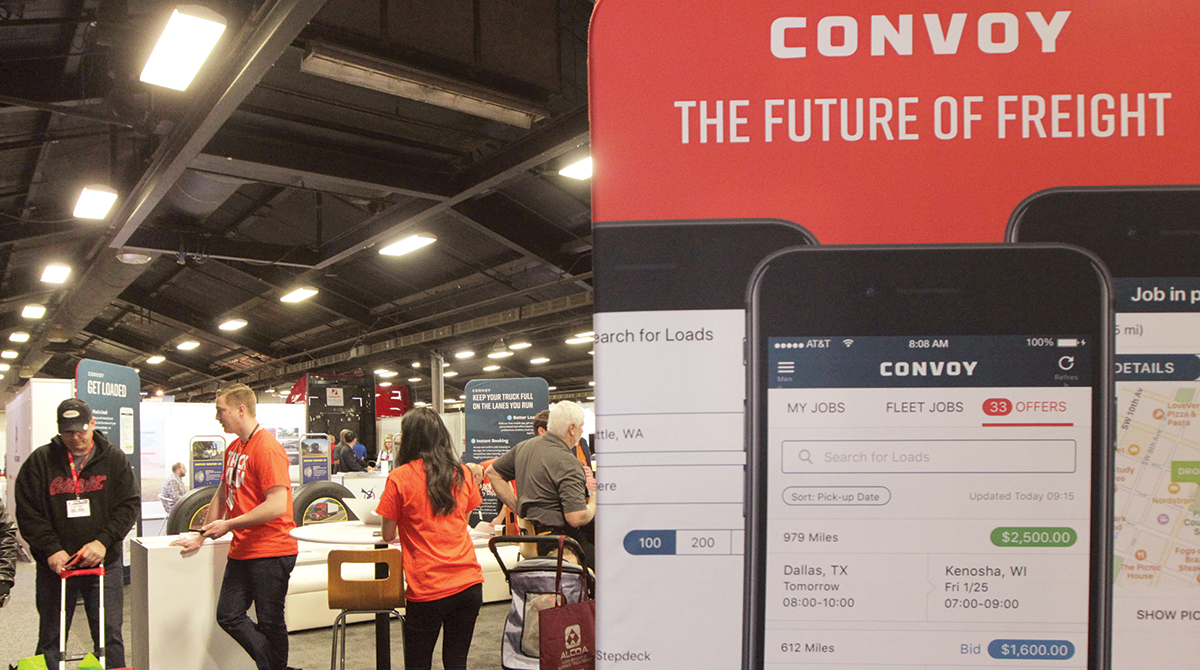 The Convoy booth at an industry show. (John Sommers II for Transport Topics)

Convoy Inc., a trucking technology developer backed by Bill Gates and Jeff Bezos, added another prominent backer through a funding round that values the startup at more than $1 billion.

Convoy said it raised $185 million in a Series C financing led by CapitalG, Alphabet Inc.’s growth equity fund. CapitalG partner David Lawee will join Convoy’s board. It is the second time in a year that Google’s parent company has put money into one of Uber Technology Inc.’s rivals. Other new investors in the round include T. Rowe Price Group Inc., led by Henry Ellenbogen, and Lone Pine Capital, led by Mala Gaonkar. Existing investors Greylock Partners and Y Combinator also participated. Convoy has raised more than $265 million.

Three-year-old Convoy makes software that matches shippers to truckers, similar to how Uber and Lyft Inc. connect riders to available drivers. The company says its technology helps shippers get better pricing and track deliveries, and lets small trucking companies plan jobs better. Truckers also save money when the system gives them a load to haul on return journeys, rather than driving back empty.

Lawee said CapitalG has been looking at Convoy for a few years, attracted by the opportunity to iron out inefficiency in the trucking market. The startup recently has shown that it can improve on-time rates for shippers and fill a larger percentage of requests, and that progress persuaded CapitalG to finally invest.

“It’s no longer a theory that they could drive efficiencies,” he said. “They are actually driving efficiencies.”

The company plans to use the money to expand. It operates in all 50 states but needs to build volume in some newer regions, such as the Southeast. Convoy also will invest to improve algorithms that help decide how much to charge shippers and how much to pay drivers, as well as software it’s offering to drivers and trucking companies to make their processes easier and more paperless.

“We want to actually build a bunch of software that solves a lot of those problems,” co-founder and CEO Dan Lewis said. “When we do that, companies are more excited about working with Convoy.”

The company has attracted a bevy of blue-chip backers that includes Salesforce.com Inc. CCEO Marc Benioff, KKR & Co. co-CEO Henry Kravis and IAC/InterActiveCorp. Chairman Barry Diller. While Uber is one of its main rivals, that company’s co-founder, Garrett Camp, was an early Convoy investor, as is current Uber CEO Dara Khosrowshahi.