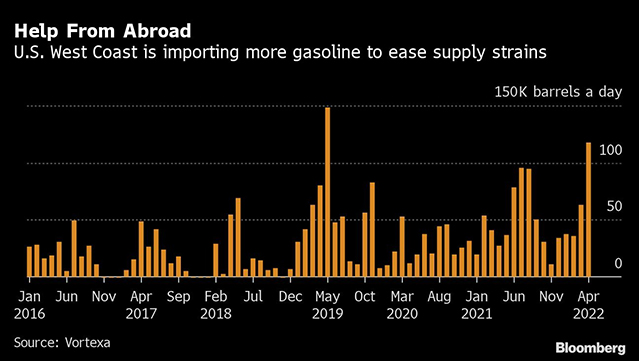 The U.S. West Coast is importing gasoline at a near-record pace this month to help ease supply constraints amid eye-popping pump prices just ahead of the peak summer driving season.

Around 120,000 barrels a day of gasoline and blending components are expected to reach the U.S. West Coast in April, including 95,000 barrels a day that already have arrived, marking the second-highest monthly level since oil analytics firm Vortexa began tracking the data in January 2016. The region imported 150,000 barrels a day in May 2019.

These imports underscore the need to replenish supply ahead of what’s shaping up to be a tight summer for gasoline. A heavy maintenance season that’s just now winding down left West Coast refinery rates at 84% last week. That has put additional pressure on drivers, with Californians paying more than anywhere else in the U.S. for gasoline.

Chevron Corp. is due to carry out major maintenance in June at its Richmond, Calif., refinery, one of the West Coast’s largest, after a labor strike delayed the original schedule in April. This will tighten gasoline supplies during peak demand months. Meanwhile, signs that high fuel prices may have deterred some drivers in March have now evaporated, with implied U.S. gasoline demand reverting to the seasonal rising norm, pushing inventories below the five-year average for this time of year nationally and on the West Coast.

The jump in imports is driven by increased volumes from Asia, which accounted for about 60% of the monthly volume. Indian refineries have been operating at above 100% capacity in order to capture high export margins, while China is ramping up fuel exports as a COVID-19 resurgence weighs on local demand.

Pump prices in California are still hovering near record levels, while the rest of the country saw a reprieve earlier this month. Californians are now paying an average of $5.689 a gallon for gasoline, 4% lower than the peak of $5.919 a gallon reached on March 29, according to auto club AAA. Meanwhile, national pump prices are heading higher once again at $4.12 a gallon.

— With assistance from Barbara Powell.