Futurist Outlines What Could Be Ahead for Driver Recruiting 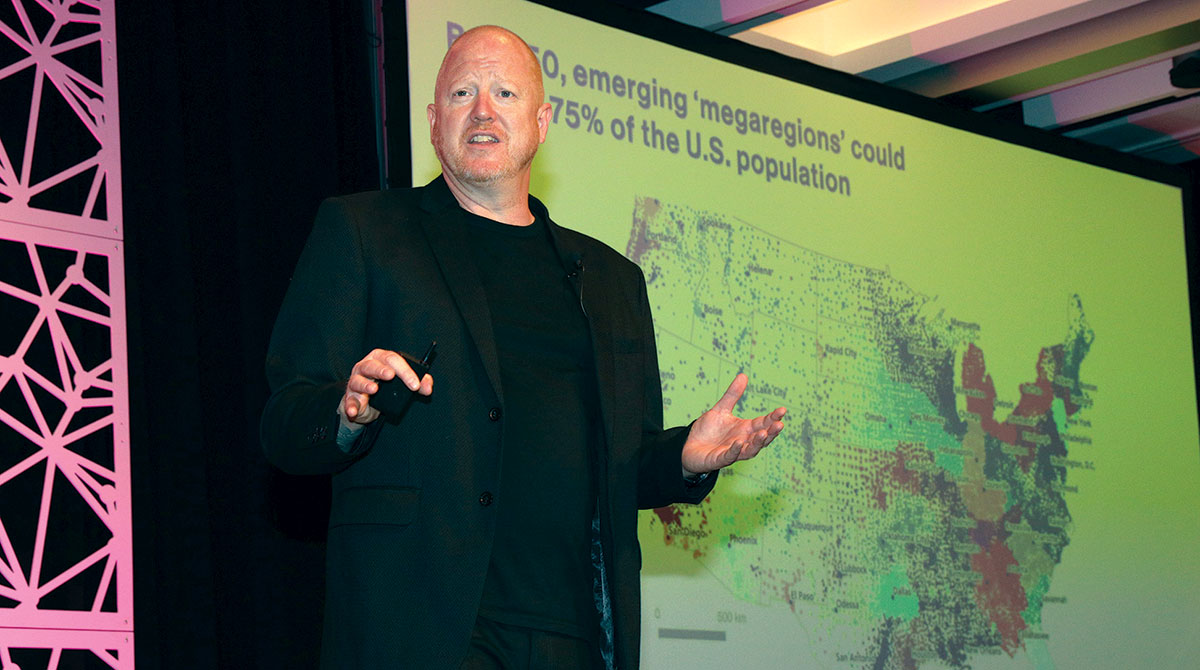 NASHVILLE, Tenn. — Futurist Nikolas Badminton explored June 2 how the trucking industry could change in the years ahead and what that means when it comes to driver recruitment.

Badminton, addressing the 2022 Recruitment and Retention Conference held June 1-3, looked at a variety of trends and economic factors when speculating on what may be ahead for trucking.

“Let’s look at market pressure,” Badminton said. “Now we know the industry is incredibly important, 70% of all goods are moved by the trucking industry in the United States. There’s over $800 million in economic value. That’s everyone from trucking and the recruiters and all the way through to the other people who support the industry. But we saw some interesting things happen during the pandemic.”

Badminton pointed to e-commerce as a major change. He noted the sales went up by nearly $219 billion between 2020 and 2021. It is expected to grow from $1.5 trillion to more than $7 trillion by 2025. He also noted manufacturers have actually brought operations back into the country to be able to ship more locally as a result.

“The reshoring is going to change the dynamics for the industry,” Badminton said. “But then we also know that there’s this shortfall in the industry today by over 80,000 truck drivers. By 2030 some people are forecasting that to be about 162,000 drivers. But what’s interesting is we’re going to need truck drivers more than ever before.”

Badminton added that while the trucking industry is experiencing an even greater need for drivers over the next few years, the population of the country is expected to rapidly grow. He also pointed out that emerging mega-regions could absorb 75% of that population by 2050.

“So regional trucking by 2050 could be a predominant part of the industry,” Badminton said. “So how does that change what you’re thinking about? How does that change how you look at all trucking, distribution, production of goods? People in cities are going to want things at the end of the street.”

Badminton noted another important consideration is autonomous trucking because it could remove the need for drivers in many circumstances. He doesn’t foresee it replacing human drivers in all circumstances over the next few decades. But he does note there is a lot of interest, including from the venture capital community and the government.

RoadSigns � RS85: How are Electric Truck Manufacturers Handling the Future of Equipment Maintenance?

“The market size is going to grow to $88 billion by 2027,” Badminton said. “So there is a lot of promise here, but why? Well, if we get a fully autonomous truck, maybe we don’t need a driver in the truck. Cost savings, efficiency, increased safety.”

Badminton added another benefit is these trucks could potentially run almost continuously because there isn’t the need to take a break or rest. That will lead to consistent mileage rates and faster delivery. He noted this technology is still a long way from its full potential. But this is what people are investing toward.

“This is how people are speculating how the future could be,” Badminton said. “The work companies like Ford is doing is really interesting when you think about futures. Companies like TuSimple are starting to build autonomous freight networks across the Southern states, and they’re getting a lot of investment and a lot of interest.”

Badminton believes technologies more often create opportunities rather than limit them through situations such as replacing labor with robotics. He noted that while the far-out future might involve completely autonomous trucking, the near future will likely involve a hybrid between human drivers and driverless technologies. He pointed to companies who are now using autonomous trucks for highway transportation but human drivers elsewhere.

Badminton also pointed to renewable energy as another important factor influencing the future of the trucking industry. He noted 86% of global energy needs can be met with renewable sources by 2050. He added an important step is the industries and companies that are embracing the renewable energy technologies. That includes trucking. Rush Enterprises, for instance, installed solar panels over some of its truck parking.

“We know that we’ve got to shift away from fossil fuels,” Badminton said. “The fact is that an economy based on renewable energy is cheaper to run than a fossil fuel based economy. This is a jarring piece of information for many people. But we’re moving forward. And some people are starting to think about the scenarios ahead of us.”

The 2022 Recruitment and Retention Conference is hosted by Conversion Interactive Agency with American Trucking Associations and Transport Topics.