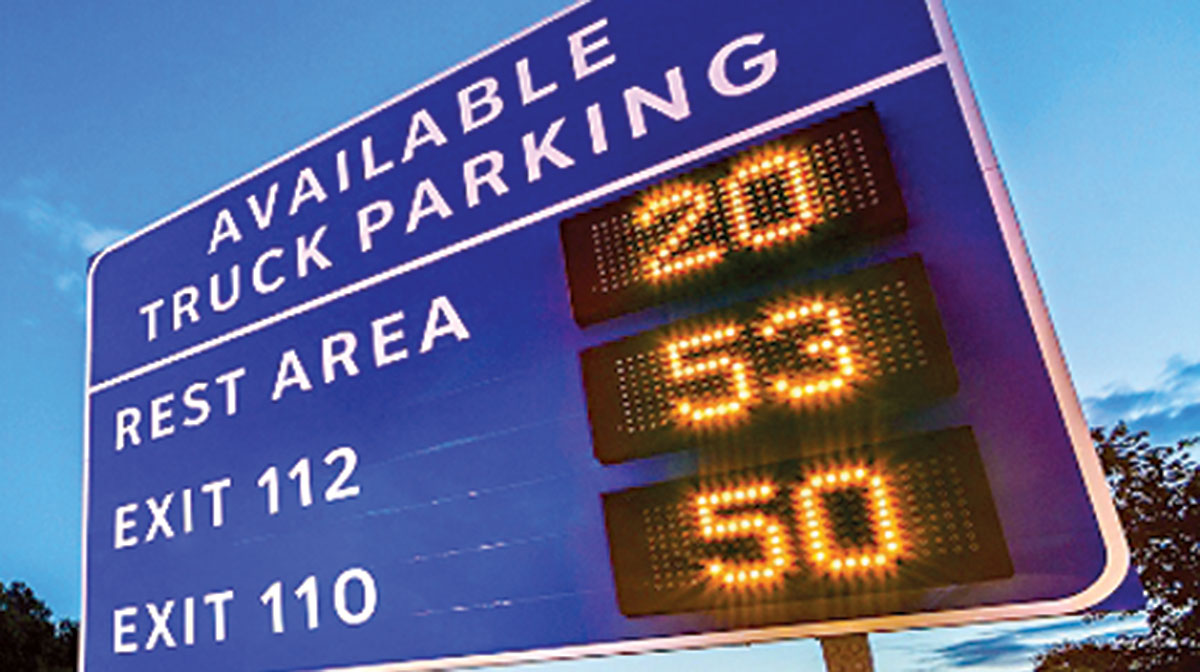 A 2019 truck parking study found that 2,300 trucks parked in undesignated areas near five rest stops — close to Interstate 40, I-17 and I-10 — using GPS data from a one-year period. (U.S. Department of Transportation)

These findings are contained in an update to its five-year state freight plan being modified by the Arizona Department of Transportation.

According to ADOT, nearly 285 million tons of freight valued at $395 billion were carried by truck in 2019 in Arizona — 42% local, 38% through, 12% inbound and 8% outbound. Trade with Canada and Mexico accounted for 28 million tons (9.5%) of total freight, with the majority of cross-border flows to and from Mexico (amounting to 22.5 million tons) mostly carried on trucks.

Truck freight shipped through Arizona mainly originates in California, Texas or Mexico. Top commodity categories are plastic products, pharmaceuticals, fresh fish and construction materials. The state’s inbound goods from California include consumer goods and vehicles coming from Asia and handled through California’s ports before being carried by trucks into Arizona.

By 2045, the amount of freight carried by trucks is projected to skyrocket 58% to 450 million tons.

ADOT officials are seeking public input on an update to its multiyear state freight plan as they assess the state’s ability to meet growing freight demands.

The agency on Sept. 20 published a 121-page draft of its state freight plan and is soliciting comments through Nov. 4. Comments can be emailed (freightplan@azdot.gov) or completed via an online form (azdot.gov/AZFreightPlanComments).

“ADOT’s top priority is to preserve and maintain its existing state highway system pavements and bridges,” ADOT spokesman Ryan Harding told Transport Topics. “While all system needs and users are very important, there is a significant shortfall between highway system needs and revenue. Therefore, ADOT values the input of the public and our key stakeholders, including our valued freight community, as we strive to address fundamental needs with limited dollars.”

Currently, the state has limited passing and climbing lanes along its key freight corridors and interstate system. (A climbing lane is an “extra” lane within a short distance to help passing trucks and slow-moving vehicles in areas such as steep inclines.)

A study seven years ago on climbing/passing lanes identified more than 100 locations for possible new passing lanes and some 75 locations for new climbing lanes mostly located in the state’s mountainous areas along key freight corridors: Interstate 40, I-17 and I-16 in the high-elevation districts of Flagstaff (nearly 7,000 feet), Prescott (5,400 feet) and Kingman (3,336 feet).

“ADOT has been able to proceed with some of the recommended projects, although needs greatly exceed available revenues,” Harding said, adding that climbing/passing lanes “are part of the overall discussion” in updating the state freight plan.

“In any case, overall highway project costs have risen significantly since the study was done in 2015,” he said.

ADOT noted that more truck traffic and greater freight shipments will result in continued truck parking shortages. Arizona has just over 7,000 truck parking spaces statewide in 129 public and private truck parking locations. Phoenix, Flagstaff and locations on I-40 near the California border begin to fill up by 9 p.m. By 3 a.m., the state’s total parking capacity is nearly full.

“While the state continues to invest in truck parking, demand often exceeds available parking along Arizona’s key commerce corridors and other highways,” the freight plan stated, adding that another problem is the availability of limited real-time truck parking information for drivers.

ADOT’s freight plan states that since the study, 96 spaces have been added at I-40 and 16 at I-10, with construction taking place on four spaces each at I-8 and I-17 and scheduled for completion this year or next.

As the population in Arizona’s main urban areas in Phoenix and Tucson grows, the state’s transportation network will have additional demands due to more freight flows in and around urban centers.