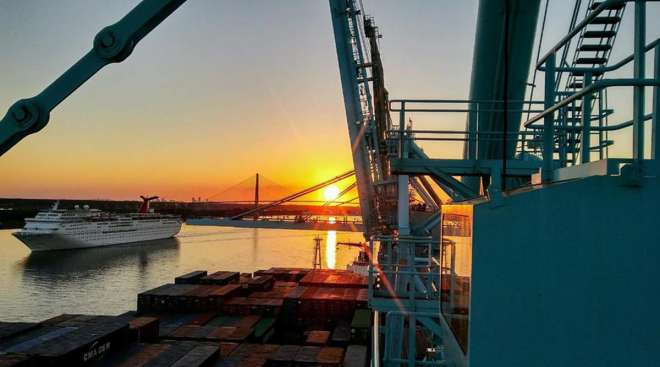 As Jacksonville, Fla., faces a monumental decision about how to pay for one of the most expensive public works projects in city history, a retired CSX executive has emerged as an unlikely source of do-it-yourself research calling into question the bedrock assumptions the Jacksonville Port Authority uses to justify deepening the St. Johns River.

Dale Lewis has met with City Council members to outline his findings. He’s created a website that collects his research, including a 16-minute video that highlights the challenges Jacksonville faces in the cutthroat competitive arena of Southeast ports.

It might seem to be an odd pursuit for someone who retired two years ago from CSX, leaving behind the corporate world where he led the team that evaluated the merits of billions of dollars in proposed freight transportation projects. But Lewis said after he started reading U.S. Army Corps of Engineers studies on Southeast ports last summer, “one question lead to another” and he ended up reading thousands of pages from reports by the Corps, JaxPort and the Florida Ports Council.

“Painters have to paint,” he said with a smile and shrug.

Lewis, 60, has affiliations with St. Johns Riverkeeper, the nonprofit environmental organization that has fought relentlessly against JaxPort’s push to deepen the river. Lewis served on Riverkeeper board from 2000 to 2004. The organization cites his research on its own website.

Lewis said he isn’t being paid by Riverkeeper or anyone else, and he didn’t take directions from anyone on how to conduct his research.

Lewis has been able to sit down with some of the same City Council members who will meet this week with JaxPort officials when they make the rounds seeking a commitment by the city to finance a big chunk of the $484 million project.

JaxPort spokeswoman Nancy Rubin said the port has “always welcomed scrutiny and questions,” but Lewis doesn’t have access to the same information that JaxPort does.

“Some of these folks are operating under incorrect assumptions and experience that’s removed from the rapid changes that we know are impacting our business today,” she said. “We’re the ones in the room with our Asian shipping companies. We’re the ones negotiating directly with those businesses. We’re working in a current port environment, and we know it to be true beyond any doubt that we are in the game with a deeper harbor.”

JaxPort cites support for the deepening from CSX, whose headquarters is in Jacksonville, and from TraPac, the operator of a terminal that opened at JaxPort in 2009 to tap into the fast-growing cargo trade from Asia.

In a letter sent last week to Mayor Lenny Curry, TraPac President Frank Pisano said the 40-foot river depth holds back the port because ships cannot bring as much cargo here as they could with deeper water. At 47 feet, Jacksonville “with relative ease” could get 300,000 cargo container units that otherwise would be going through Savannah’s port, he wrote.

JaxPort is on track to handle about 1 million cargo container units this year from all trade lanes. Approximately 400,000 of those units come from Asian trade, which is the fastest-growing piece of JaxPort’s business.

JaxPort released a statement by Fredrik Eliasson, who is CSX vice president and chief marketing officer, in support of the deepening, calling it critical for Northeast Florida’s economic growth.

Lewis, who stops short of saying he opposes the deepening, said he’s probably spent 700 to 900 hours doing research, compiling his findings, and talking to people about what he learned.

“I had no idea it would that it would go as far as it has,” he said.

He said his goal is to get the full range of costs and benefits before city leaders so they have a complete picture, not just the best-case scenario that usually gets painted to justify the huge cost of deepening the river.

He said when he dug into annual reports by the Florida Ports Council, he found the state’s ports have a dismal track record when it comes to cargo container projections. Over and over again, they made eye-catching predictions that didn’t pan out, but they still kept forecasting accelerated growth.

“This time, it matters,” Lewis said.

Lewis said if the river channel is deepened, it’s reasonable to expect Jacksonville will move more cargo containers. But he said JaxPort predicts faster growth than it’s experienced historically, even though Jacksonville is battling bigger Southeast ports fighting to protect and grow their own market shares.

“I think if you sit down with me and walk through the facts and numbers from all angles, everybody I’ve had that conversation with gets the point that this is going to be very hard,” Lewis said of JaxPort’s aggressive growth predictions. “I’m not saying it can’t be done, but it’s something that no Florida port has ever accomplished.”

Lewis notes that when the U.S. Army Corps of Engineers did its assessment of deepening Jacksonville’s port, the Corps’ report said “it makes the most sense” to assume that with major Southeast ports all pushing to deepen their harbors, no single port would have the upper hand after all the dredging was finished.

He said that’s why city leaders should use a range of forecasts when they look at potential benefits of a deeper harbor.

The most aggressive forecast for cargo container growth would result, after a couple of decades, in creating almost 6,200 jobs for people working directly for port-dependent businesses, according to JaxPort’s reports. Those businesses and workers in turn would spend money on goods and services, generating about 9,200 more indirect and induced jobs.

Moderate cargo container growth would result in about 3,800 jobs at port-dependent businesses after a couple of decades, and generate about 5,660 indirect and induced jobs.

City Council members Bill Gulliford and John Crescimbeni, who are among those who have met with Lewis, said Lewis raises valid issues.

“I want to know where all the business is going to come from,” Gulliford said. “That’s always been one of my biggest concerns. Who is going to be that customer or group of customers that’s going to take us to the promised land if we spend all the money on dredging?”

After news broke June 9 that JaxPort would shorten the length of river deepening to 11 miles, rather than 13 miles, so the cost would go down by about $200 million, Lewis went back to crunching numbers. The cost of river deepening would be less, but the shortened length would require TraPac to move 2 miles down river from its current location to have access to part of the river that proposed for deepening. That creates a whole new set of variables for costs versus benefits, Lewis said.

As JaxPort engages with City Council on whether the city will help pay the tab, Lewis said it reminds him of when he was in the business world and a big-dollar capital project was headed toward the ultimate verdict in the boardroom.

“When you’re directly supporting a CEO or chairman, everything is about getting ready for the next big forum,” he said. “You build the picture and you walk the facts around, but it all comes to a point where a decision has to be made. That’s what happening now.”