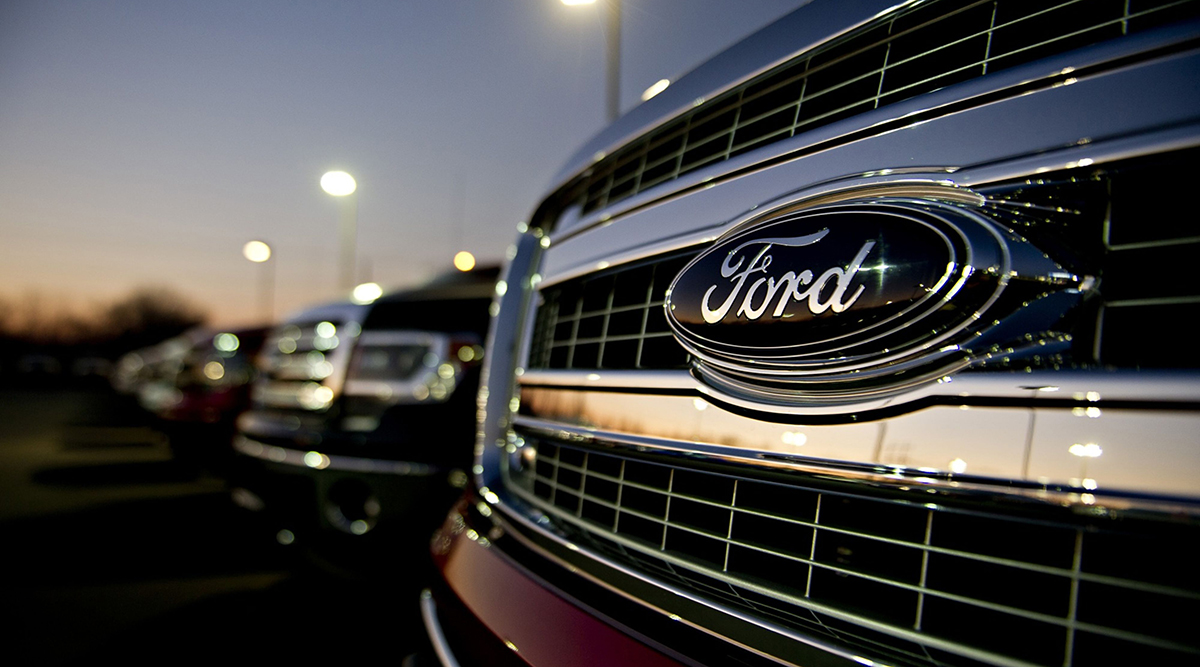 Ford Motor Co., charging forward with big investments in electric vehicles, raised its full-year profit forecast and said it will restore its dividend, sending the stock soaring as much as 11%.

The automaker lifted its 2021 profit forecast for the second time in as many quarters and is now projecting $10.5 billion to $11.5 billion in earnings before interest and taxes. The reinstated quarterly dividend of 10 cents a share will be paid Dec. 1, the company said. Ford suspended the payout at the onset of the pandemic in March 2020.

Ford attributed the strong results to a letup in the critical shortage of semiconductors — a problem still haunting most automakers — along with strong demand for its vehicles. Ford has amassed the largest inventory of vehicles in the industry and boosted average selling prices by 13% to $51,460, according to researcher Edmunds.com.

Farley said the company has annual demand for 200,000 electric Mustang Mach-E SUVs and is moving quickly to boost output of EVs. The automaker is beginning to build the Mach-E in China, augmenting production in Mexico.

By the mid-2020s, Ford will have factory capacity to build more than 1 million battery-electric vehicles a year. “And I think we’ll need more,” Farley said.

While Ford sees the chip shortage easing, Chief Financial Officer John Lawler told reporters it could still extend into 2023. Ford’s factories won’t run at full tilt until the end of next year, he said.

Ford stock has more than doubled since Farley became CEO a year ago.

On Oct. 27, General Motors Co. beat third-quarter estimates but cautioned the chip shortage that has held back vehicle production may linger well into 2022. On Oct. 28, Volkswagen AG cut its forecast for annual deliveries but predicted semiconductor supply will steadily improve this quarter and throughout next year.

Ford, which suffered more than most from the chip crisis in the year’s first half, managed to increase the number of cars on dealer lots in September, ending the quarter with 236,000 vehicles in inventory.

That helped the company become the top seller in the U.S. in September, surpassing GM, and grabbing 11.7% of the American auto market in the quarter, up from 10.6% in the second quarter, according to Edmunds.

Ford’s finance arm and its North American operations continued to drive earnings results, with Ford Credit posting earnings of $1.1 billion before interest and taxes, unchanged from a year earlier. The lending unit has benefited from record used car prices driven by shortages of new and used vehicles.

Ford had a third-quarter profit margin of 10.1% before interest and taxes in North America and is at 9% so far this year. Results in its home market stood out from losses in other regions, though the carmaker managed to eke out a profit in South America for the first time in eight years.

In North America, Ford earned $2.42 billion before interest and taxes, down from $3.2 billion in last year’s third quarter. U.S. vehicle sales fell 27% in the quarter on the chip crisis, but that was less than the 33% decline GM experienced.

In Europe, Ford posted an Ebit loss of $52 million, compared with a deficit of about $440 million last year. Vehicle sales in the 20 key European markets fell 35% from the previous year.

In China, Ford had a loss of $39 million, narrower than its $58 million shortfall a year earlier. Ford’s vehicle sales in China fell 8.7% in the third quarter as floods and pandemic restrictions hit certain parts of the country.

In South America, Ford had profit of $2 million before interest and taxes, compared with a loss a year earlier. Lawler said that was Ford’s first profit in that region since 2013.

Farley has won over investors by moving quickly to close money-losing factories in Brazil and India, while boosting investment in electric vehicles by a third to $30 billion through 2025. Ford plans to have 40% to 50% of its global sales volume fully electric by 2030.

“The culture is starting to change to be quicker, more accountability, less bureaucracy,” Farley said. “The proof is in the pudding.”