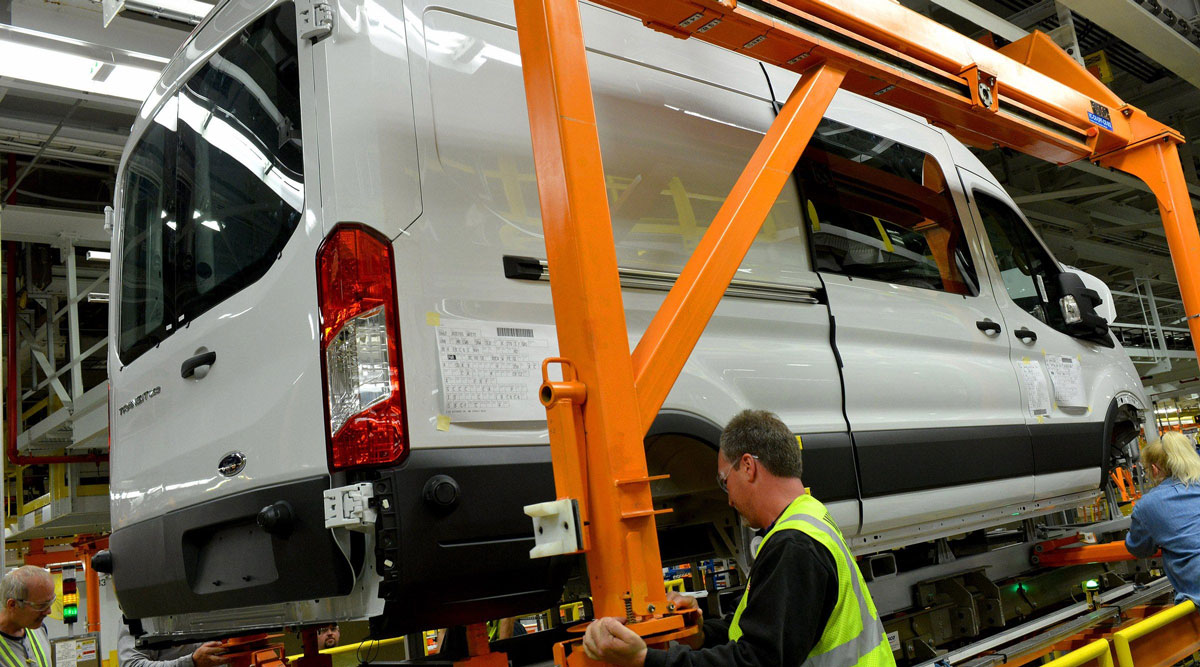 Ford will make the E-Transit van at its Kansas City Assembly Plant. (Ford via TCA)

Ford’s newest electric vehicle — a commercial van called the E-Transit — will be unveiled by the company Nov. 12, assembled at Ford’s Kansas City, Mo., plant and be available by late 2021.

While Ford is investing $100 million in its Kansas City facility for the project, it’s also pouring more money into its Michigan plants as it reorients toward electrification, the company said in a news release.

The automaker also announced Nov. 10 a $150 million investment into its Van Dyke Transmission Plant in Sterling Heights. The plant will make e-motors and e-transaxles starting in 2021 for the new fleet of electric vehicles.

Ford announced plans for an all-electric F-150 in September, to be assembled at its Rouge Plant in Dearborn, Mich. Because of strong early interest, Ford is increasing production plans by 50% and adding another 200 jobs in addition to the initial 300 announced.

The company is also making an electric SUV version of its Mustang called the Mach-E, built in Mexico. That’s expected to hit dealerships in December.

“Ford’s strategy is different — we are delivering affordable, capable electric vehicles in the heart of the retail and commercial market rather than six-figure status vehicles,” said Kumar Galhotra, Ford president of the Americas and International Markets Group.

Starting with Ford’s three new electric vehicles — the electric F-150, the Mach-E and E-Transit — the company is aiming to achieve carbon neutrality by 2050 and meet the requirements of the Paris Accord. Ford plans to invest $11.5 billion on electrification through 2022.

Gov. Gretchen Whitmer said Nov. 10 that Ford’s latest announcement is good news for Michigan’s economy and families and will help solidify the state’s status as the “automotive capital of the world.”

“Since I was sworn in as governor, we have brought in historic investments to our auto plants, creating more than 12,000 Michigan jobs,” Whitmer said in a statement. “I am proud to see that work continue today. As governor of the state that put the world on wheels and is now building the next generation of transportation, I am proud to work with Ford and every business that wants to invest in Michigan.”

Ford to Go All Electric in Europe by 2030