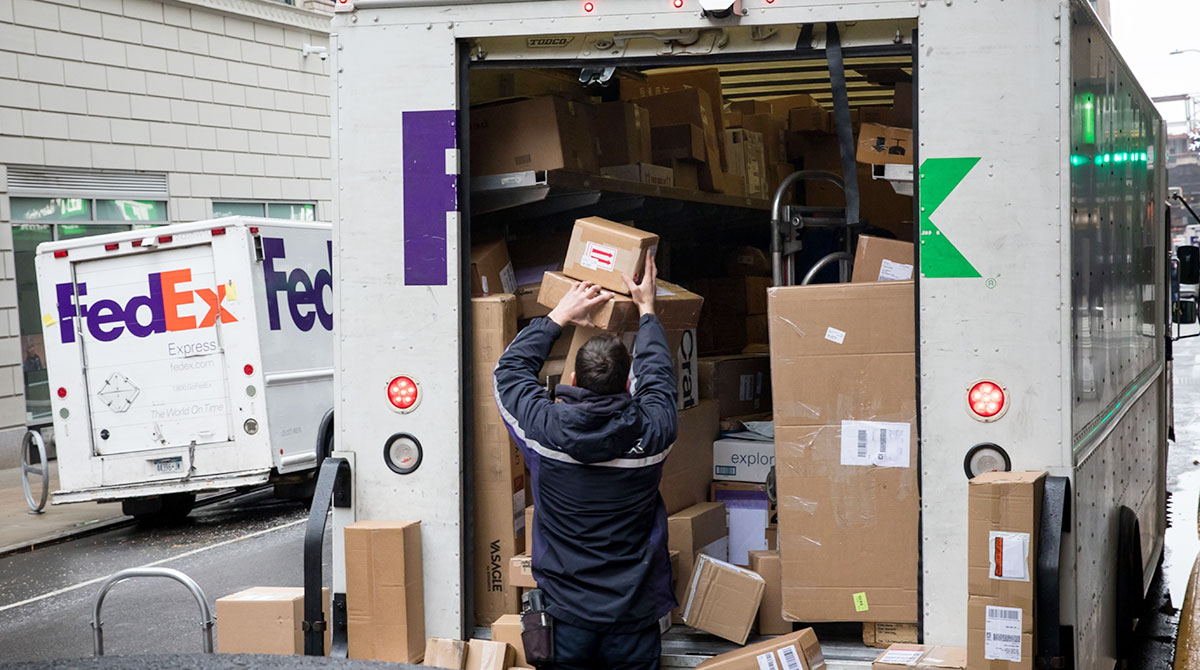 An independent contractor to FedEx Corp. unloads packages from a delivery truck on Cyber Monday in New York. (Michael Nagle/Bloomberg)

Adjusted earnings were $4.83 a share for the quarter ending Nov. 30, above analysts’ estimates. The latest figure was in line with what it reported a year earlier, when U.S. cities were locked down to slow the spread of COVID-19. Revenue rose 14% to $23.5 billion, driven by price gains. That also exceeded the average of estimates compiled by Bloomberg.

FedEx aggressively raised prices this year as retailers attempted to secure delivery capacity during the busiest season of the year. The courier also has focused on increasing sales to smaller shippers that usually don’t command discounts from list prices, helping to offset some of FedEx’s higher costs.

FedEx is ranked No. 2 on the Transport Topics Top 100 list of the largest for-hire carriers in North America.

Shares of @FedEx moving higher after posting an earnings beat moments ago.

President and COO Raj Subramaniam joins us ahead of the earnings call with his take on the quarter. $FDX pic.twitter.com/PhctZmqs9N

Investors had been concerned by a lack of workers at the courier’s sorting hubs, which has lowered capacity and forced the company to incur additional costs to reroute packages. Wages have risen as FedEx competes with other companies, including rivals UPS Inc. and Amazon.com Inc., to ramp up holiday hiring amid a tight labor pool.

FedEx rival UPS has fared better during the labor shortage thanks to a mostly unionized workforce that is paid higher than the industry average and has wage rates that are locked in until 2023.

FedEx’s struggles have been reflected in its on-time delivery performance, meeting deadlines for 85.7% of packages from Nov. 14 through Dec. 4, according to ShipMatrix. UPS logged 96.4%, while the U.S. Postal Service figure was 95.1%.

The company raised its full-year profit forecast after cutting it in the previous quarter. FedEx’s board approved a $5 billion share buyback plan and $1.5 billion will be repurchased by the end of May, Chief Financial Officer Mike Lenz said.

Adjusted operating margins were 7.1% during the quarter, down from 7.4% a year earlier. FedEx had extra costs of $470 million from a year ago because of the labor shortage, a bit more than the $450 million reported in the previous quarter.

Those costs related to the worker shortage are expected to subside “to some degree” in the current quarter, compared to a year earlier, and then decline “significantly” in the fourth quarter, which concludes May 31, Lenz said in an interview.

The Memphis-based company boosted its latest full-year profit outlook to $20.50 to $21.50 a share, excluding expenses from integrating its TNT Express unit and fluctuations in pension-fund values.

The courier has been helped somewhat as consumers accelerated holiday orders because of retailer promotions to avoid supply chain snags that threatened to keep gifts out of stock. FedEx’s latest quarter included the Monday after the Thanksgiving holiday this year, typically the busiest delivery day of the peak season for couriers.

The traffic jam of shipping containers at U.S. ports, especially in Southern California, has been pushing some companies to turn to air freight out of desperation, boosting pricing at FedEx Express. Still the unit faces higher costs because of COVID-19 restrictions, including limitations on pilots crossing borders and the need for additional crews to keep flights going. Revenue rose 12% at Express, while its operating margin fell to 8.2% from 8.7% a year earlier.

Sales at the Ground unit, typically FedEx’s fastest growing and most profitable unit, rose 13% to $8.3 billion, helped by a 9% increase in price per package. The profit margin fell to 5.8% from 7.5% on higher costs.

FedEx’s freight unit has been a bright spot, riding strong cargo demand and surging trucking rates. Sales climbed 17% at the unit and operating margin was 14.7%, compared with 13% a year earlier.