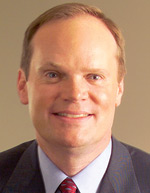 “It was a much bigger rollout and introduction than I ever would have expected,” he told Transport Topics just steps away from the Hoover Dam shortly after the conclusion of the event witnessed by several hundred people May 5.

Prior to the actual unveiling of the Inspiration, a prerecorded video of Stotlar was projected on the 726-foot dam as part of a press conference. Freightliner captured the Guinness World Record with the event for highest light output projection.

“It was pretty fun to be part of it,” Stotlar said.

On the video, he credited the desire of Freightliner and parent company Daimler Trucks North America to look toward the future and evolve along with the trucking industry.

His company’s less-than-truckload fleet, Con-way Freight — the largest unit of the company that ranks No. 4 on the Transport Topics Top 100 list of U.S. and Canadian for-hire fleets — exclusively uses Freightliner trucks.

Stotlar said autonomous trucks one day will be “part of the landscape,” though the technology is more likely to gain wider acceptance in passenger cars first.

That belief did not take away from the meaning of the Hoover Dam spectacle.

“Daimler is showing what is possible,” he said. “A lot of technology will be tested over time. The focus is on safety, and that is the hallmark of our industry.”

The day after the event, DTNA President Martin Daum spoke of the support of several other large fleet customers in this endeavor. He cited Swift Transportation and Nussbaum Transportation among the companies that utilize Freightliner vehicles for at least 80% of their fleets, and see value in the technologies.

“This is a life-and-death decision,” Daum said of selecting a truck. “One mistake will harm their bottom lines” due to accidents and potential lawsuits.

He also showed a video of Richard Stocking, president of Swift Transportation, who touted the manu-facturer’s forward-looking and innovative approaches.

Phoenix-based Swift ranks No. 6 on the for-hire TT100.