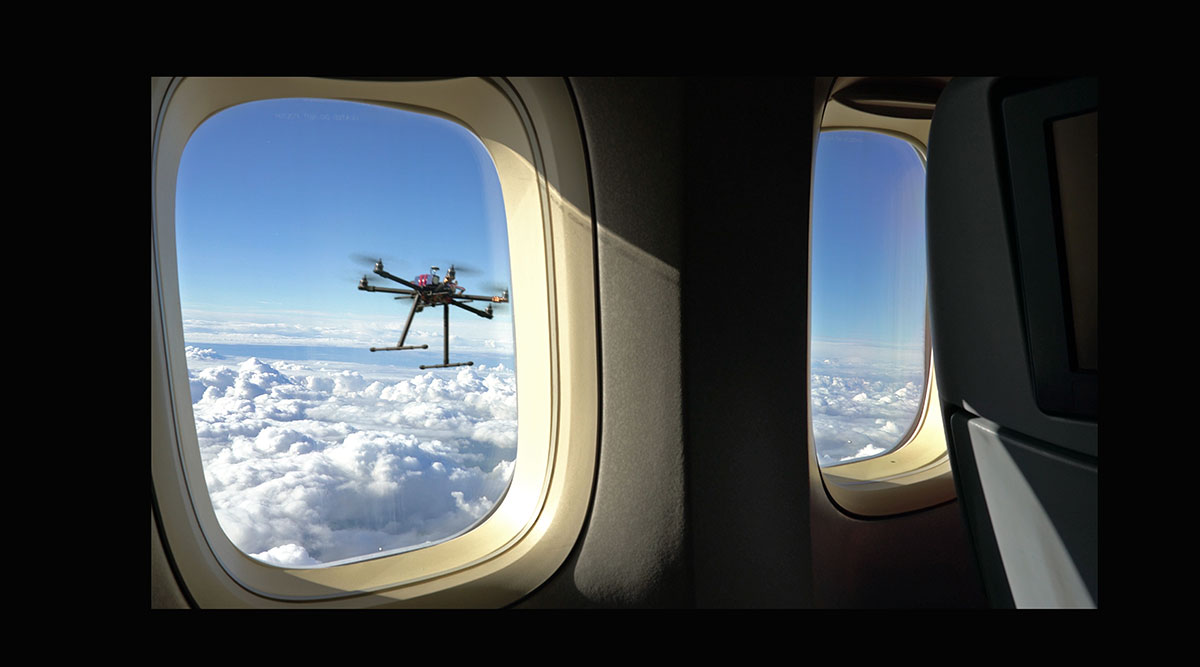 The millions of small civilian drones plying the nation’s skies can cause significant damage to airliners and business jets in a midair collision, new research commissioned by the Federal Aviation Administration concluded.

While most drones weigh only a few pounds, they include motors and other metal equipment that could cause significant damage to aircraft engines, windshields or wings upon impact, according to the study by an FAA research center.

Even though airliners and other aircraft are designed to take impacts from birds, “it doesn’t mean they are going to be able to withstand a 4-pound or an 8-pound UAS impact,” said Gerardo Olivares, a researcher at Wichita State University who helped lead the study. He referred to drones as UAS, or unmanned aerial systems.

Determining the risks of a midair collision between drones and traditional planes and helicopters is critical to opening the skies to greater uses of drones.

Companies ranging from retail and technology giants Amazon.com Inc. and Alphabet Inc. to startups such as Flirtey Inc. are hoping to capitalize on drone technology to make commercial deliveries. At the same time, other businesses want to expand use of unmanned craft for aerial inspections, from Berkshire Hathaway Inc.’s BNSF Railway to Farmers Insurance Group.

Even though these companies plan to fly at low altitudes below most human-occupied aircraft, the FAA could impose stricter safety systems on such drones if collisions could cause catastrophic damage.

The crash-study results could also steer FAA on its policies for enforcing existing drone-flight rules. As incidents rise, the FAA may be more inclined to seek fines or criminal penalties on drone users who flout the rules designed to keep them away from other aircraft.

The results of the government-sanctioned study, the most comprehensive of its kind to date, add urgency to FAA’s efforts to improve safety as the industry pushes to expand drone operations in everything from delivering consumer goods to performing aerial inspections. It also comes on the heels of the first two midair collisions between small drones and traditional aircraft in North America.

Last month the FAA said reports of drone-safety incidents, including flying improperly or getting too close to other aircraft, now average about 250 a month, up more than 50% from a year earlier. The reports include near-collisions described by pilots on airliners, law-enforcement helicopters or aerial tankers fighting wildfires.

The agency estimates that 2.3 million of the devices will be sold for recreational use in the U.S. this year. As of Nov. 3, more than 838,000 people had registered with FAA as owners of small, civilian drones.

Researchers at four universities conducted impact tests and computer modeling over the past 14 months, attempting to determine the potential hazards to common single-aisle airliners and business jets. The work was peer-reviewed by NASA and aircraft manufacturers, Olivares said.

The researchers said that drone manufacturers could reduce the potential risks if they used less metal in their devices. The research also highlights the need for automated systems on drones that sense other aircraft and move out of the way, they said.

Olivares, who is director of crash dynamics at Wichita State’s National Institute for Aviation Research, said it didn’t appear that any of the impacts from a 2.7-pound quad copter or a 4-pound fixed-wing model plane would prove catastrophic to airplanes.

The 4-pound model plane was capable of causing severe damage — defined as penetrating the fuselage and damaging an aircraft’s internal structure — in a collision with multiple areas of the tail fins on a jetliner such as the Boeing Co. 737.

In addition, jet engines were likely to suffer more serious damage from such small drones than a similar-sized bird.

“The Federal Aviation Administration will use the research results to help develop operational and collision risk mitigation requirements for drones,” the agency said in a press release.

A separate set of tests released by FAA released earlier this year found that small drones popular with hobbyists and some commercial photographers were unlikely to cause serious head and neck injuries if they fell from the sky and hit people. A study by researchers at Virginia Tech in Blacksburg, Va., reached similar conclusions.

Separate from the FAA-sponsored tests, accident investigators in the U.S. and Canada are looking at the damage caused by two actual collisions with aircraft.

On Oct. 12, a chartered turboprop carrying six passengers and two crew members struck a drone at about 1,500 feet as it prepared to land in Quebec, according to the Transportation Safety Board of Canada. The Beechcraft King Air A100, which sustained minor damage to the left wing, landed a short time later and there were no injuries.

Current regulations in the U.S. and Canada include provisions designed to prevent drones from operating near aircraft. In most cases, drones are supposed to stick to low altitudes below where aircraft operate and they aren’t allowed to fly near airports without special permission. But the upswing in reported safety incidents suggest that many unmanned operators either ignore the rules or don’t know them.

The study released Nov. 28 was done by the Alliance for Safety of UAS Through Research Excellence, an FAA-sponsored center of excellence that goes by the moniker ASSURE.