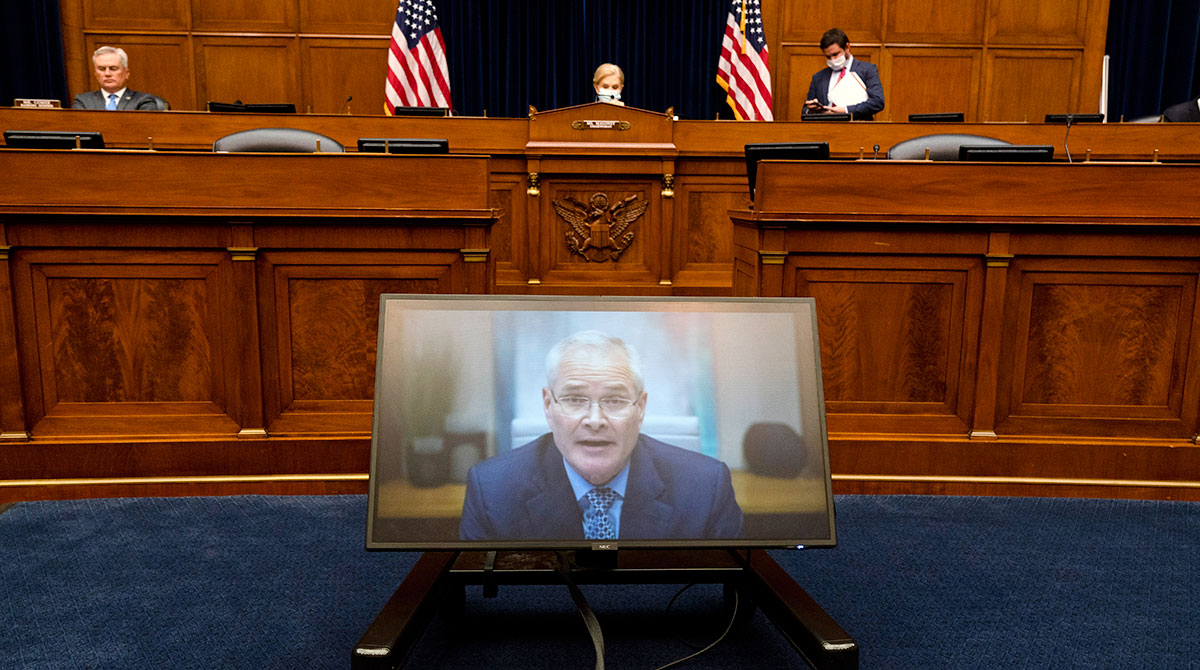 Darren Woods, CEO of ExxonMobil testifies via video conference during a House Committee on Oversight and Reform hearing on the role of fossil fuel companies in climate change, Thursday, Oct. 28. (Jacquelyn Martin/Associated Press)

ExxonMobil’s chief executive said Oct. 28 that his company “does not spread disinformation regarding climate change,” as he and other oil company chiefs countered congressional allegations the industry concealed evidence about the dangers of global warming.

Testifying at a landmark House hearing, CEO Darren Woods said ExxonMobil “has long acknowledged the reality and risks of climate change, and it has devoted significant resources to addressing those risks.″

The oil giant’s public statements on climate “are and have always been truthful, fact-based ... and consistent” with mainstream climate science, Woods said.

Democrats immediately challenged the statements by Woods and other oil executives, accusing them of engaging in a decadeslong, industrywide campaign to spread disinformation about the contribution of fossil fuels to global warming.

We commend President Biden and the administration’s actions to bring the importance of reducing methane emissions to the forefront. And we’re pleased to support the new Global Methane Pledge, which seeks to reduce emissions by 30% compared to 2020 levels. — ExxonMobil (@exxonmobil) October 26, 2021

“They are obviously lying like the tobacco executives were,’’ said Rep. Carolyn Maloney, D-N.Y., chairwoman of the House Oversight Committee.

She was referring to a 1994 hearing with tobacco executives who famously testified that they didn’t believe nicotine was addictive. The reference was one of several to the tobacco hearing as Democrats sought to pin down oil executives on whether they believe in climate change and that burning fossil fuels such as oil contributes to global warming.

The hearing comes after months of public efforts by Democrats to obtain documents and other information on the oil industry’s role in stopping climate action over multiple decades. The fossil fuel industry has had scientific evidence about the dangers of climate change since at least 1977, yet spread denial and doubt about the harm of its products — undermining science and preventing meaningful action on climate change, Maloney and other Democrats said.

“Do you agree that (climate change) is an existential threat? Yes or no?” Maloney asked Shell Oil President Gretchen Watkins.

“I agree that this is a defining challenge for our generation, absolutely,’’ Watkins replied.

I demanded that Big Oil Execs pledge to simply no longer spend ANY MONEY to oppose emission reductions and climate action.

Watkins, Woods and other oil executives said they agreed with Maloney on the existence and threat posed by climate change, but they refused her request to pledge that their companies would not spend money — either directly or indirectly — to oppose efforts to reduce planet-warming greenhouse gas emissions.

“We’re pledging to advocate for low-carbon policies that do in fact take the company and the world to net-zero” carbon emissions, said BP America CEO David Lawler.

Maloney said she hoped the hearing will help persuade oil executives to change their approach to climate change.

“I hope that after 40 years of misleading the public to block climate action, our nation’s oil and gas industry will finally change its behavior and join the many good corporate citizens, community leaders and scientists who are working together to save our planet and our children,’’ she said.

“This hearing is just the start of our investigation,” added Rep. Ro Khanna, D-Calif., who leads a subcommittee on the environment. “These companies must be held accountable.”

The committee released a memo Oct. 28 charging that the oil industry’s public support for climate reforms has not been matched by meaningful actions, and that the industry has spent billions of dollars to block reforms. Oil companies frequently boast about their efforts to produce clean energy in advertisements and social media posts accompanied by sleek videos or pictures of wind turbines. 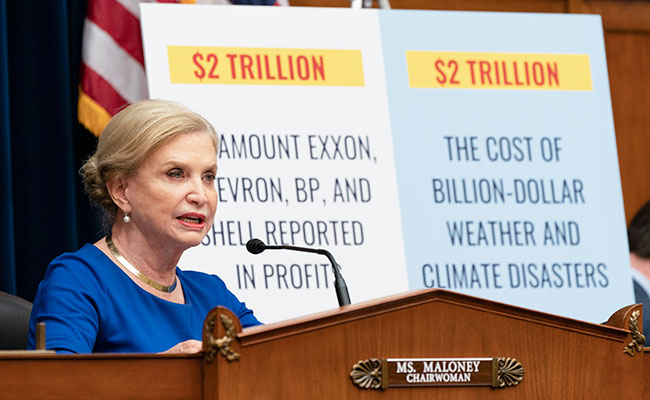 Maloney and other Democrats have focused particular ire on Exxon, after a senior lobbyist for the company was caught in a secret video bragging that Exxon had fought climate science through “shadow groups” and had targeted influential senators in an effort to weaken President Joe Biden’s climate agenda. That agenda includes a bipartisan infrastructure bill and a sweeping climate and social policy bill currently moving through Congress.

In that video, Keith McCoy, a former Washington-based lobbyist for Exxon, dismissed the company’s public expressions of support for a proposed carbon tax on fossil fuel emissions as a “talking point.”

McCoy’s comments were made public in June by the environmental group Greenpeace UK, which secretly recorded him and another lobbyist in Zoom interviews. McCoy no longer works for the company, Exxon said last month.

Woods, Exxon’s chairman and chief executive, has condemned McCoy’s statements and said the company stands by its commitment to work on finding solutions to climate change.

Chevron CEO Michael Wirth also denied misleading the public on climate change. “Any suggestion that Chevron has engaged in an effort to spread disinformation and mislead the public on these complex issues is simply wrong,’’ he said.

Maloney and Khanna sharply disputed that. They compared tactics used by the oil industry to those long deployed by the tobacco industry to resist regulation “while selling products that kill hundreds of thousands of Americans.”″

Kentucky Rep. James Comer, the top Republican on the oversight panel, called the hearing a “distraction from the crises that the Biden administration’s policies have caused for the American people,’’ including higher gasoline prices.

“The purpose of this hearing is clear: to deliver partisan theater for primetime news,’’ Comer said.