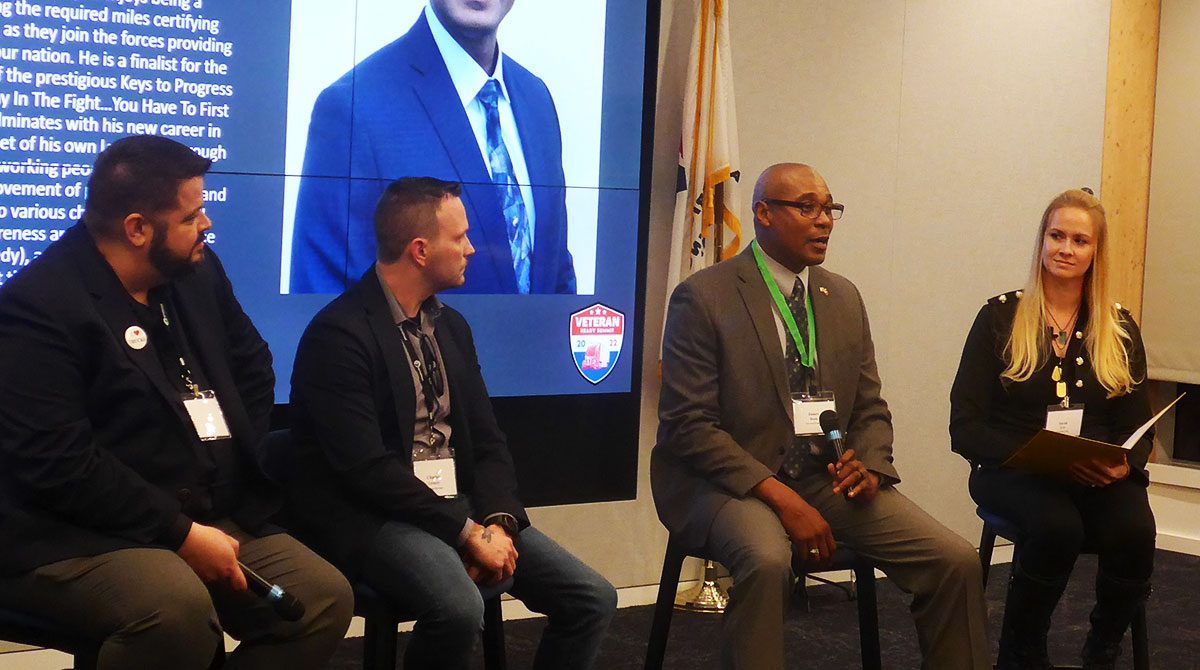 WASHINGTON — Military and trucking industry experts said traits including a willingness to help others and interest in serving a greater good are hallmarks of why truck driving jobs are an excellent option for service members looking to transition to civilian life.

“We’re in a war for talent, and so are you,” said Brig. Gen. John Cushing, deputy commanding general for the U.S. Army Recruiting Command, during the Veteran-Ready Summit, a recruitment-focused event hosted Dec. 14-15 by American Trucking Associations at the group’s headquarters. “I really appreciate you giving options to those who have served.”

Cushing stressed the importance of including in military recruitment some discussion of good post-service civilian careers such as those found in trucking, which provide opportunities to continue serving by, “doing something that’s bigger than me,” he said.

“You’ve got to know that when people look at joining [the military], they look at how you treat those who served. It is important to bridge that [employment] gap to help people,” Cushing added.

And the opportunity is there, noted ATA Executive Vice President for Advocacy Bill Sullivan. “Companies are begging for more,” he said. “They want people who want to work hard.” He stressed that trucking offers service members the ability to make a good living, and is ideal for individuals who are goal-focused, disciplined and thrive in teams.

Sullivan said, “A sustained focus is the key to whether we make progress” transitioning veterans to “a great life” in trucking careers. One good strategy, he suggested, is to work directly with small- and medium-sized carriers, as they generally lack large human resources departments, to help them recruit and retain veterans.

Cushing encouraged carriers to work collaboratively with local military recruiters to refer candidates back and forth. For instance, a trucking company could refer someone to an Army recruiter, and inform that candidate that a job could be available in trucking at the conclusion of their military service.

A panel discussion at the event titled “Veterans Trucking Transition: Experts Turn Tactical to Practical” featured four veterans who spoke about their post-military careers in trucking.

Charles Gracey, president and founder of Chattanooga, Tenn.-based Hot Seat Services, joined the U.S. Navy at 17 and served six years before launching his company, which works to recruit truck drivers and place them in jobs. Gracey noted that veterans face “a lot of unknowns” when entering the workforce, and stressed they often are seeking a sense of purpose in their post-military lives. He urged trucking companies to tell them during job interviews about the various career paths they could follow in the industry.

Former Marine Corps Lt. Col. James Rose, a contract driver for Prime Inc., believes trucking is a great fit for veterans, as it is mission-oriented and focus-driven. A driver trainer who also serves on Prime’s driver advisory board, Rose echoed the sentiment that veterans experience a “discomfort of the unknown” when transitioning from the uniformity of the military, with its regular pay cycles, known policies and regulations, and familiar expectations when transferring from one base to another. He noted, however, that trucking can be a “very, very lucrative industry” that can help veterans achieve generational wealth.

Prime Inc. ranks No. 20 on the Transport Topics Top 100 list of the largest for-hire carriers in North America.

They also can become leaders, said Christian Gonzales, a driver recruitment engagement manager at waste management firm Clean Harbors. Gonzales, who joined the Army in 1996 and served with the military police until 2004, stressed that service members receive fundamental training in leadership. “Make them leaders in your companies,” he said. Gonzales also is co-leader of his company’s veteran employee resource group, an effort launched two years ago to help members connect outside of work.

Clean Harbors ranks No. 32 on the Transport Topics Top 100 list of the largest private carriers in North America.

In November, Clean Harbors ranked on the annual Military.com “Top 25 Veteran Employers” annual list. In 2018, it joined the Army Partnership for Youth Success program, which guarantees job interviews to active or former soldiers. The company also offers an online military skills translator tool to help service members find civilian job postings that match their skills, and is a member of the U.S. Department of Defense SkillBridge Program, which places service members in their final 180 active duty days in internship-like roles to help them prepare for permanent jobs.

While former combat veteran Sarah Lee does not work in trucking, the charitable organization she founded, Waypoint Vets of Whites Creek, Tenn., brings together and empowers military veterans through adventurous activities. She said the company’s program helps create a sense of camaraderie and teamwork by, “doing crazy physical things in beautiful environments.”