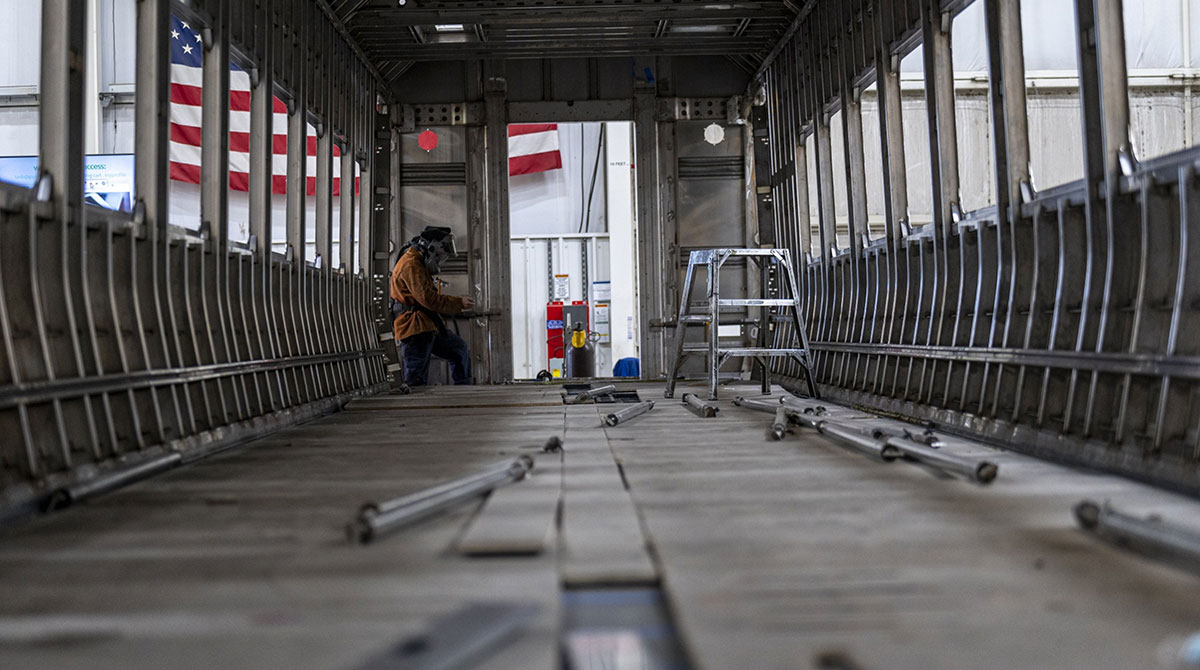 An employee works on an express inter-city train being built in Sacramento. (David Paul Morris/Bloomberg)

WASHINGTON — U.S. employers added just 194,000 jobs in September, a second straight tepid gain and evidence that the pandemic still has a grip on the economy with many companies struggling to fill millions of open jobs.

The Oct. 8 report from the Labor Department also showed that the unemployment rate fell sharply to 4.8% from 5.2% in August.

The economy is showing some signs of emerging from the drag of the delta variant of the coronavirus, with confirmed new COVID-19 infections declining, restaurant traffic picking up slightly and consumers eager to spend.

But new infections remained high as September began, and employers are still struggling to find workers because many people who lost jobs in the pandemic have yet to start looking again. Supply chain bottlenecks have also worsened, slowing factories, restraining homebuilders and emptying some store shelves.

Many economists still think that most of the roughly 3 million people who lost jobs and stopped looking for work since the pandemic struck will resume their searches as COVID wanes. It took years after the 2008-09 recession, they note, for the proportion of people working or seeking work to return to pre-recession levels. The government doesn’t count people as unemployed unless they’re actively looking for jobs.

Some of the factors that have kept many jobless people on the sidelines may be starting to ease. According to a survey by the Census Bureau, for example, the number of people who aren’t working because they must stay home to care for a child declined by half in September compared with June. That figure had barely dropped last fall, when many schools remained closed and conducted virtual learning. The new census figures suggest that more parents, particularly mothers, might have rejoined the workforce last month as the school year began and their children returned to school.

In addition, an August survey by the job listings website Indeed found that the proportion of unemployed Americans who said they’d like to find a job once the school year began had more than doubled from just two months earlier.

Yet there are also signs that it might be too soon to expect a flood of parents to have rejoined the labor market. Lael Brainard, a member of the Fed’s Board of Governors, noted in a recent speech that COVID-19 outbreaks in late September caused 2,000 schools to close for an average of six days in 39 states.

Several enhanced unemployment benefits ended in early September, including a $300-a-week federal supplement as well as programs that, for the first time, covered gig workers and people who were jobless for six months or more. So far, the ending of those programs appears to have had only a small effect on the number of people seeking work.

Governors in about 25 states ended the $300 benefit before the nationwide expiration in September. Research by economists at Goldman Sachs found that unemployed people who were looking for work were much more likely to take jobs when their benefits ended. But the early cutoffs did not cause people on the sidelines to start searching again, Goldman concluded.

Another reason workers are scarce is a surge in retirements among older, more affluent workers whose home equity and stock portfolios have surged since the pandemic struck and who have managed to build up savings. Goldman Sachs estimates that about 1.5 million people have retired who wouldn’t have before the pandemic upended the economy. Many of these people will likely stay retired, economists expect.

In the meantime, fear of COVID continues to keep some would-be job seekers on the sidelines, notably those who previously worked in public-facing service jobs at restaurants, bars, hotels and retailers.