A proposal to deny funding for the enforcement of the December mandate on electronic logging devices was removed from a fiscal 2018 funding bill the House is scheduled to consider next month. 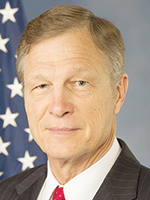 The amendment to the funding bill that would have halted implementation and enforcement of the mandate on ELDs offered by Rep. Brian Babin (R-Texas) was withdrawn. The congressman’s office did not explain the reason for the withdrawal.

Despite the provision's withdrawal from the must-pass funding bill, the congressman has other legislative avenues at his disposal. Babin may advance stand-alone bills or attach the provision onto other must-pass bills, such as major authorizing measures.

Babin already is sponsoring legislation that would delay the mandate by two years. His bill has gained support from 43 fellow House members, including the chairmen of the tax-writing Ways and Means, Armed Services and Agriculture committees.

Babin’s bill has the strong backing from the Owner-Operator Independent Drivers Association. “Concerns raised about the mandate are being taken seriously by Congress,” Norita Taylor, a spokeswoman for the group, recently told Transport Topics.

Opposition to any effort aimed at delaying the mandate is led by a significant number of trucking firms, American Trucking Associations and the Federal Motor Carrier Safety Administration.

The federal agency that regulates the industry perceives the Dec. 18 ELD mandate as a way to improve hours-of-service compliance among commercial drivers.