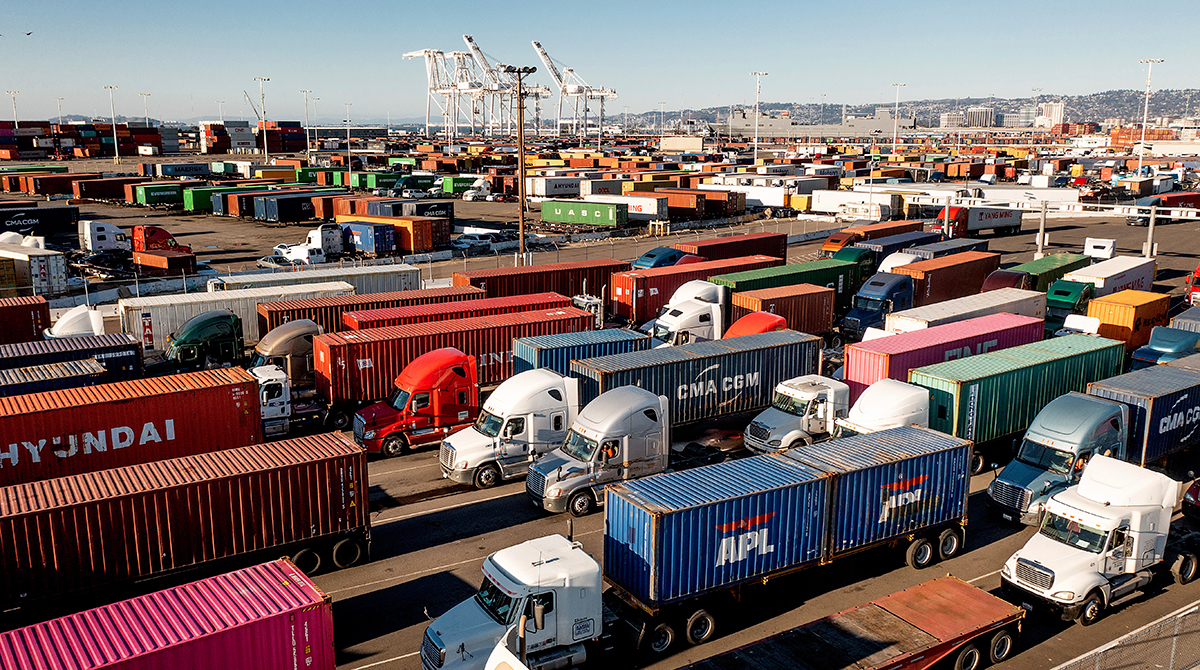 Trucks line up at the Port of Oakland, Calif. (Noah Berger, File/Associated Press)

WASHINGTON — The U.S. economy grew at a 2.3% rate in the third quarter, slightly better than previously thought, the Commerce Department said Dec. 22. But prospects for a solid rebound going forward are being clouded by the rapid spread of the latest variant of the coronavirus.

The third and final look at the performance of the gross domestic product, the nation’s total output of goods and services, was higher than last month’s estimate of 2.1% growth.

The newfound strength came primarily from stronger consumer spending than what was previously thought, as well as businesses rebuilding their inventories more than initial estimates revealed.

The 2.3% third-quarter gain follows explosive growth that began the year as the country was emerging from the pandemic, at least economically. Growth soared to 6.3% in the first quarter and 6.7% in the second quarter. The emergence of the delta variant in the summer was blamed for much of the third-quarter slowdown.

Now with the appearance of the omicron variant, coming on top of high inflation and lingering supply chain issues, there are concerns that growth could be constrained heading into 2022.

Those fears have sent the stock market on a turbulent ride in recent days, although new optimism that the omicron risks will be manageable sent the Dow Jones industrial average up 560 points Dec. 21.

All major U.S. markets rallied this week, but all are in negative territory over the past 30 days.

Economists say it is far too early to declare an all-clear on the threats posed by the new variant.

Oxford Economics has trimmed its forecast for economic growth for the current quarter from 7.8% to 7.3%, which would still represent a sizable rebound from the third-quarter slowdown.

After Sen. Joe Manchin (D-W.Va.) voiced opposition to his party’s spending plans, Goldman Sachs cut its GDP forecast to 2% from 3% for the first quarter, 3% from 3.5% for the second quarter, and 2.75% from 3% in the third quarter.

Kathy Bostjancic, chief U.S. financial economist for Oxford, said the firm’s current assessment was that the resurgence of COVID-19 could reduce growth next year from 4.3% to 4.1% and that if Biden’s Build Back Better program is completely derailed, that could likely shave another 0.4 percentage points in 2022, lowering it to around 3.7% and chop a half-point from growth in 2023, reducing it to below 2%.

She said under these assumptions, job growth could be 750,000 lower by this time next year if economic growth slows as much as she fears.

“Omicron has been so rampant,” Bostjancic said. “We think it is going to take a pretty toll on economic activity.”

And it is not just the resurgence of COVID that could hold the economy back next year. Inflation has spiked to the highest level in nearly four decades, prompting the Federal Reserve to start pulling back the massive amounts of support it has been providing to the economy as it switches from trying to boost job growth to fighting inflation.

Economists expect GDP growth this year to come in around 5.5%, which would be the best showing since 1984 and a reversal from last year when the economy shrank by 3.4% and the global pandemic erased 22 million jobs early in the year.

The Dec. 22 report showed that consumer spending, which accounts for two-thirds of economic activity in the U.S., grew at a 2% rate in the third quarter, down from the 12% surge in the April-June quarter, but up from last month’s estimated quarterly gain of 1.7%.

It is the uncertainty of what is to come, however, that is now concerning economists.

“The omicron variant poses a downside risk in the near-term as do supply chain disruptions and shortages that could be a constraint for households and businesses over coming months,” said Rubeela Farooqi, chief U.S. economist at High Frequency Economics.