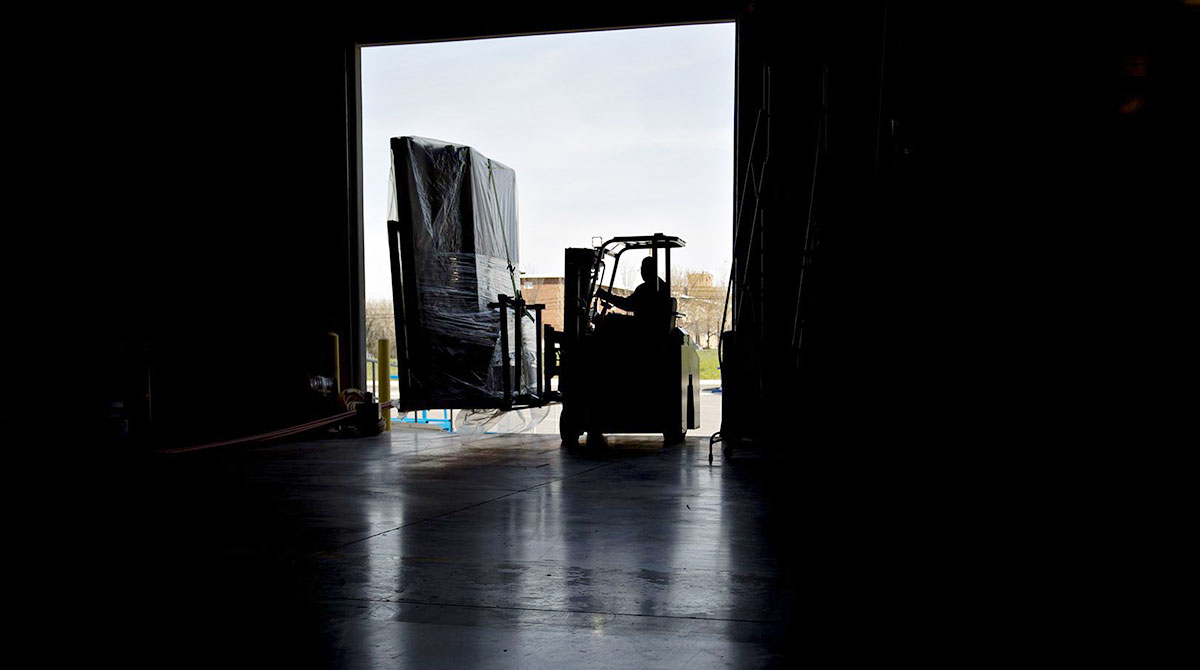 A worker uses a forklift to move packages at a robotics facility in Baltimore. (Andrew Harrer/Bloomberg)

U.S. economic growth accelerated by more than forecast in the fourth quarter, fueled by the rebuilding of inventories and capping the strongest year since the 1980s.

Gross domestic product expanded at a 6.9% annualized rate after a 2.3% pace in the third quarter, the Commerce Department’s preliminary estimate showed Jan. 27. That was the strongest quarterly growth in over a year.

The median forecast in a Bloomberg survey of economists called for a 5.5% increase in GDP.

Inventories, which added 4.9 percentage points to GDP growth last quarter, are expected to remain a tailwind for economic growth this year. Faced with persistent supply shortages, businesses had been relying on inventories to keep up with the robust merchandise demand seen throughout 2021. Companies now are beginning to restock, which will help bolster production. 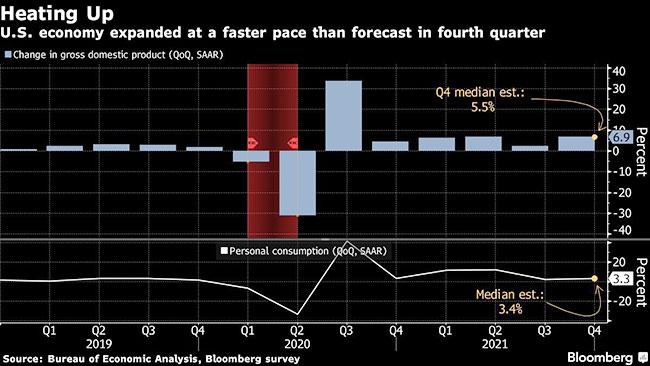 That’s possible in part because personal consumption — while still solid — has cooled from the red-hot pace seen in the first half of 2021. Consumer outlays, the biggest part of the economy, grew at a 3.3% pace last quarter, in line with estimates and up from 2% in the prior period.

However, other economic data suggest that strength was concentrated at the start of the fourth quarter, as Americans pulled forward their holiday shopping to navigate shipping delays and a surge in COVID-19 cases curbed demand for services late in the year. Figures Jan. 27 showed a surge in retail and wholesaler stockpiles in December, which may reflect imports that arrived too late for holiday shoppers and the omicron-related dip in activity.

Real final sales to domestic purchasers, a measure of underlying demand that strips out the trade and inventories components of GDP, increased at a 1.9% pace in the final three months of the year, just slightly ahead of the 1.3% rate seen in the third quarter.

The omicron variant has stifled economic growth in the near-term as record levels of infections keep many Americans at home, denting demand and further disrupting supply chains. Looking beyond the first quarter though, many economists expect solid growth this year amid expectations of an easing in inflationary pressures and supply chain challenges.

But to what extent inflation actually subsides is unclear. Fed Chair Jerome Powell said Jan. 26 after the central bank’s first policy meeting of the year that officials are ready to raise interest rates in March to arrest persistent price pressures.

“We have an expectation about the way the economy’s going to evolve but we’ve got to be in a position to address different outcomes, including the one where inflation remains higher,” Powell said during a virtual press conference after the policy meeting.

Despite record imports of foreign goods in December, the impact of trade on GDP was neutral in the quarter as services exports jumped. That reflected more international travel to the U.S.

The limited supply of motor vehicles available to purchase weighed on consumption once again, subtracting in back-to-back quarters for the first time since early 2019. A persistent semiconductor shortage has curbed car production at a time of intense demand, driving up prices.

The report marks the end of yet another year defined by pandemic-related setbacks to the economy. While widespread access to vaccines and another massive wave of government stimulus bolstered consumer spending in the first half of the year, new virus variants, depressed labor force participation and persistent supply chain challenges weighed on the economy’s productive capacity.

Record job growth helped drive down the unemployment rate below 4%, but central bankers at the Fed and at the White House misjudged the path of inflation. Instead of a temporary phenomenon, policymakers now are grappling with how to combat the decades-high inflation that’s eating into workers’ paychecks and driving down President Joe Biden’s approval ratings.