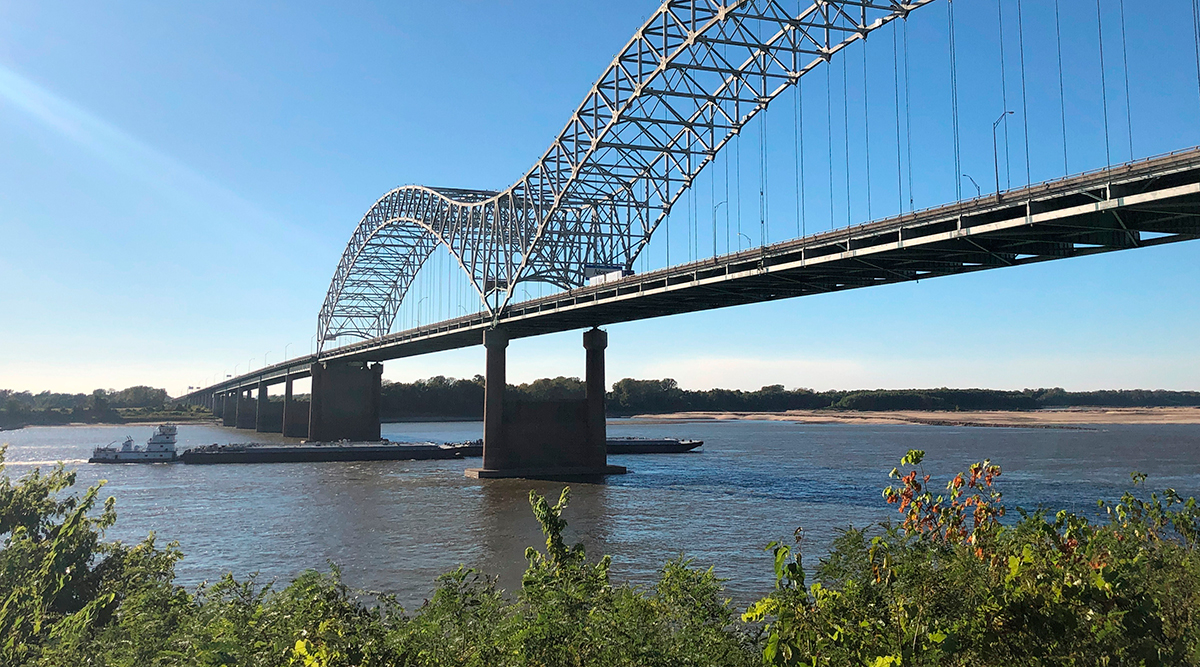 A barge moves north on the Mississippi River under the Interstate 40 bridge connecting Tennessee and Arkansas on Sept. 29. (Adrian Sainz/Associated Press)

A logjam of more than 100 ships, tugboats and their convoys of barges in the shrinking Mississippi River is threatening to grind trade of grains, fertilizer, metals and petroleum to a halt.

The largest U.S. barge operator warned customers it won’t be able to make good on deliveries. Ingram Barge Co. declared force majeure in a letter to customers due to “near-historic” low water conditions on the Mississippi, the top route to get U.S. grains and soybeans to the world market.

Drought has reduced water levels along the biggest U.S. waterway by so much that vessels are running aground. The Coast Guard is responding to grounded vessels in at least two places, near Stack Island between Louisiana and Mississippi, and upriver near Memphis, according to a statement. American Commercial Barge Line, another shipping company, said on in a post on its website that it’s the most severe impact to navigation since 1988.

Covered barges full of grain and soy float from U.S. farm country to terminals in the Gulf of Mexico, while crude oil, refined products and imported steel also travel through sections of the waterway. Some 60% of all grain exported from the U.S. is shipped on the Mississippi River through the Port of New Orleans and the Port of South Louisiana, according to the National Park Service.

Levels on the Mississippi River at Memphis are low. @weathertrevor reports -7 feet below the gauge. This has caused barge traffic to be halted as the water level is to low for barges to safely navigate. pic.twitter.com/yvvQfgqcu1 — Ian Ripple (@Ripple1026) October 6, 2022

The logjam is coming at the worst time as the soybean and corn harvests are each about one-fifth complete and supplies will start piling up. The river woes, coupled with a soaring dollar, are destroying demand for U.S. supplies even with Russia’s invasion of Ukraine still impeding shipments in the Black Sea.

The Coast Guard said there was a queue of 122 vessels at Stack Island and 15 vessels at Memphis. Due to increased groundings, the number of vessels in tow is being restricted.

Meanwhile, any snags in fertilizer shipments — which farmers rely on to plant crops for next year — are happening as nutrients to grow food have soared and as Hurricane Ian temporarily shut production at a Mosaic Co. fertilizer plant in Florida.

A daylight look of the Mississippi River at Memphis where the river is so low it has been closed to barge traffic. pic.twitter.com/CAXsiwLUEs — Ian Ripple (@Ripple1026) October 6, 2022

“The Mississippi River is vital to the fertilizer transportation network,” said Alexis Maxwell, an analyst at Bloomberg Intelligence.

A peaking La Nina is limiting storms coming in from the southwest that would replenish rivers, and any significant relief is unlikely through the first 10 days of November, according to World Weather Inc. president Drew Lerner.

“I don’t have a major storm coming up for the balance of the month,” Lerner said. “I’m a little pessimistic and not feeling good about the situation.”

— By Michael Hirtzer, Elizabeth Elkin and Joe Deaux. With assistance from Diego Lasarte.