DTNA to Skip MATS in 2016; Calls for Biennial Schedule 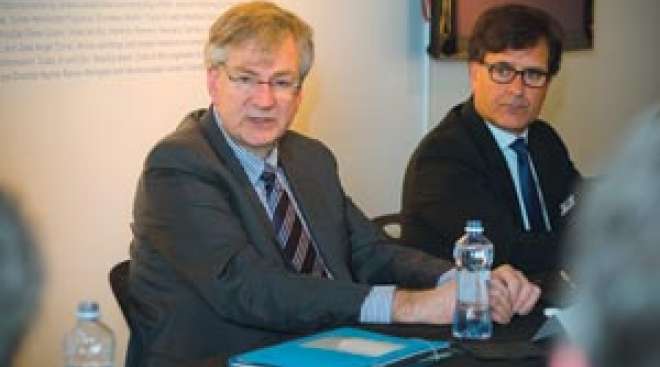 Martin Daum at MATS 2015 by John Sommers II for Transport Topics
By Neil Abt, Editorial Director

This story appears in the May 18 print edition of Transport Topics.

The president of Daimler Trucks North America said the company will not attend the 2016 Mid-America Trucking Show and will instead focus attention next year on the IAA Commercial Vehicles show in Germany.

In an exclusive interview with Transport Topics, Martin Daum explained the decision and outlined changes he hopes Mid-America organizers will consider so that DTNA can “support MATS to become a significant show in the world.”

“We want to come to Mid-America in a two-year sequence. I really like the IAA format over in Europe — having it every two years,” said Daum.

“That makes sense for our industry be-cause we don’t have the short-lived cycles like the passenger-car industry. We have longer investment cycles,” he added. “It is not that easy to every year make a big splash.”

Daum also said he hopes MATS will be extended by one additional weekday. He wants a platform in the United States like the one he said IAA already provides, “where suppliers and OEMs meet and really showcase their technology and plans, and get inspired by each other. A country can have one show of that magnitude, and in my opinion, not every year.”

Young said he has not “investigated the possibility of going to an every-other-year schedule” but is “open to adding on to our current yearly format.”

He said MATS is driven by the needs of the market. “We are always open to direct discussions with our supporters to make MATS a better event for the industry,” he added. “It goes without saying that the presence of the DTNA companies and all they bring to the show, both tangible and intangible, will definitely be missed in 2016.”

At the same time, he said the show is coming off a record-breaking attendance of 81,768 in 2015, and MATS should “be able to fill the exhibit space that DTNA is releasing.”

DTNA’s brands include Freightliner and Western Star trucks and Detroit engines and components.

DTNA’s share of the U.S. Class 8 market, including Freightliner and Western Star, was 40.49% in the first quarter, according to retail sales figures from Wards Auto. In 2014, its share was 37.26%.

In a statement issued by DTNA after the story was first posted on TT’s website, the company said it “intends to return to the MATS in 2017 and attend the show [every two years] thereafter.”

However, in his interview, Daum said that “whoever provides the best platform” the company will go with it.

“In this case, we are the customer, and I know how picky customers can be — I experience that every day,” Daum said. “On the other side, the Mid-America location and time fits. There is no reason to go away.”

Daum said the company will maintain its presence at the many other industry events it already attends.

For example, he called American Trucking Associations’ Management Conference & Exhibition a good place to “bring your latest and best model, where you bring your next model-year truck” for customers in the on-highway segment to take an up-close look.

He described MATS as “an industry show, where you bring your novelties, where you push the envelope, where you show something like we did this year with the SuperTruck, where you introduce new models.”

It is billed as the largest annual heavy-duty trucking industry event in the world, and Young said exhibit space in 2015 sold out in record fashion. The 2016 show is scheduled for March 31-April 2.

Other truck makers haven’t decided on the event but could consider attending every other year as well.

“Although we have not yet committed to attending MATS in 2016, we do believe that moving to a bi-annual schedule would be beneficial to exhibitors and customers alike,” Bill Kozek, president of Navistar’s truck and parts business, told TT.

Magnus Koeck, vice president to marketing and brand management for Volvo Trucks, said: “We always evaluate and consider all possible options in terms of sales and marketing activities when we develop our business plan for the following year. We will also do this when we start planning the details for 2016.”

The IAA Commercial Vehicles show takes place during the fall of even-numbered years in Hanover, Germany. Last year’s show saw more than 250,000 visitors and 2,000 exhibitors. Included were many international companies that supply the U.S. truck market as well as North American companies that do business abroad. Nearly every corner of the Hanover Fairground showcased connectivity and autonomous-driving technology, though much of it is still in a concept stage.

The main event for most visitors was the Mercedes-Benz Future Truck 2025 from Daimler AG.

Another popular model for visitors was the “Optimus Prime” truck from the movie Transformers. That was first shown at MATS in 2014 and was based on the new Western Star 5700XE.

Young said the DTNA companies “represent several of our largest exhibitors and strongest supporters,” adding that Freightliner is a charter exhibitor and has never missed a show.

MATS is generally considered the second-largest event in Louisville behind the Kentucky Derby, bringing in tens of millions of dollars.

In 2009, Paccar Inc. did not exhibit, but both of its brands, Peterbilt Motors and Kenworth Trucks, returned in 2010, when Volvo Trucks was absent.

All truck makers have attended each year since 2011.