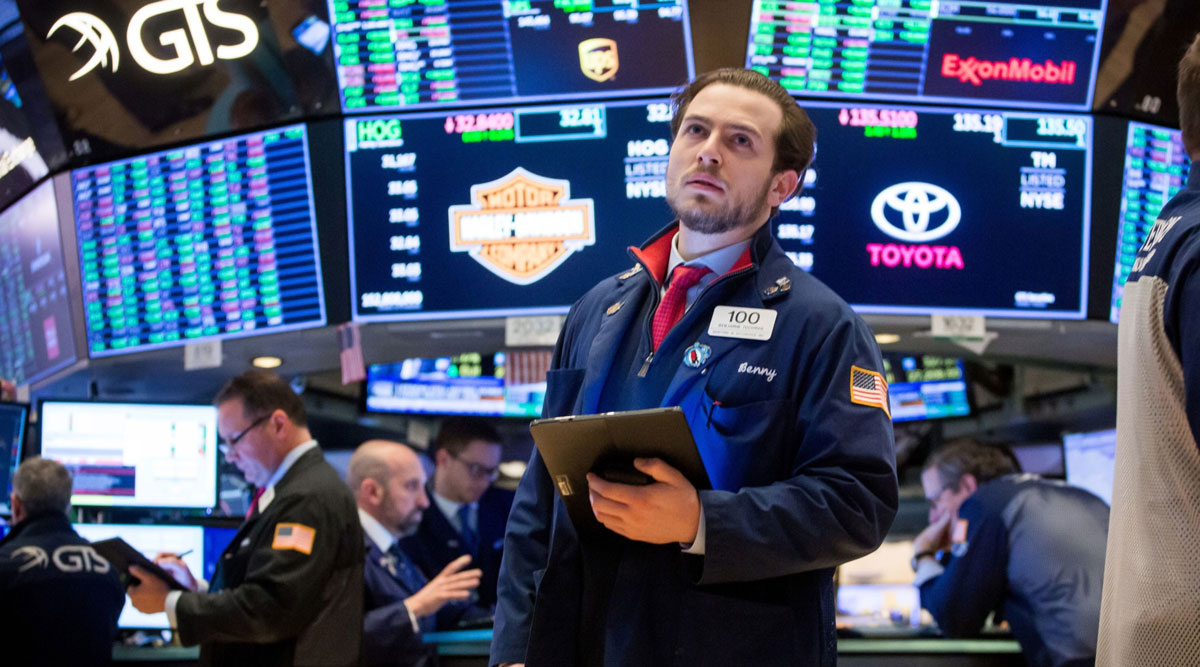 A trader reacts on the floor of the New York Stock Exchange on Feb. 26. Over the course of the last month, global stocks have cratered. (Michael Nagle/Bloomberg News)

Stocks sank to their worst week since the financial crisis of 2008 as traders went into full retreat out of fear that the coronavirus will plunge the U.S. and other major economies into deep recessions. The Dow industrials dropped more than 900 points, extending their weekly loss to 17%.

The price of U.S. crude oil also took another nosedive as investors anticipate a sharp drop in demand for energy as manufacturing, travel and commerce grind nearly to a halt. New York became the latest state to extend a mandate to nearly all workers to stay home to limit the spread of the virus.

The Dow Jones Industrial Average slid more than 600 points, erasing an early gain of 444 points. The index was down 3.4% in late afternoon trading.

The action taken by New York Gov. Andrew Cuomo, coming just a day after California announced similar measures, is another sign that large swaths of the U.S. economy are coming to a standstill as restaurants, retailers and other businesses dependent on consumer traffic are forced to close doors and furlough or lay off workers.

The measures mean less demand for oil. U.S. crude dropped about 21% and moved below $20 a barrel for first time since February 2002.

The stock sell-off wiped out the market’s gains from a day earlier, deepening the losses in what’s been another brutal week on Wall Street. The Dow is down 16% for the week and has lost value in four of the last five weeks.

Investors are weighing the likelihood that the global economy is entering a recession because of the massive shutdowns and layoffs caused by the outbreak against steps by central banks and governments to ease the economic pain.

Ultimately, investors say they need to see the number of new infections stop accelerating for the market’s volatile skid to ease.

“We just don’t know what the next two weeks will bring,” said Paul Christopher, global market strategist at the Wells Fargo Investment Institute. “Are we going to follow the same infection curve as other countries and the number infections will drastically accelerate? That’s when the storm is going to come.”

The S&P 500, the benchmark for many index funds held in retirement accounts and the measure preferred by professional investors, was down 3.2% after being up 1.8% earlier. The index is down 31.1% since reaching a record high a month ago and is on track for its biggest weekly loss since October 2008 during the global financial crisis.

Investors continued to seek safety in U.S. government bonds, driving their yields broadly lower. The 10-year Treasury yield, which influences interest rates on mortgages and other consumer loans, slid to 0.94% from 1.12% late March 19.

Oil has been plunging in recent weeks as investors anticipate a sharp drop in demand for energy. It’s down by nearly half from $45 a barrel earlier this month. A price war between Saudi Arabia and Russia has also pushed oil lower.

Despite the latest bout of selling, hopes remain that there will be progress in finding virus treatments and that “a boatload of stimulus by both central banks and governments will put the global economy in position for a U-shaped recovery,” said Edward Moya of Oanda in a report. 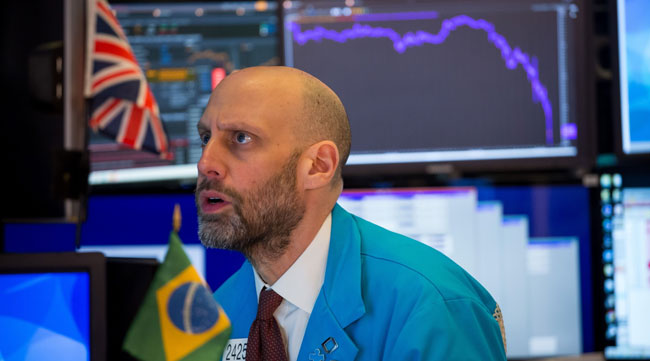 Members of President Donald Trump’s economic team were convening March 20 on Capitol Hill to launch negotiations with Senate Republicans and Democrats racing to draft a $1 trillion-plus economic rescue package amid the coronavirus outbreak.

“We hope to see the Congress act on that early next week,” Vice President Mike Pence said during an afternoon press conference.

The rescue package is the biggest effort yet to shore up households and the U.S. economy as the pandemic and its nationwide shutdown hurtles the country toward a likely recession.

Even with the market’s broad slide, airlines, hotels and cruise line operators climbed as Congress worked on the economic stimulus bill that would include billions to bail out those industries. United Airlines surged 14.8% and MGM Resorts International jumped 19.1%. Carnival rose 17.4%. Despite the big gains, the stocks are still down sharply for the year.

On March 19, the European Central Bank launched a program to inject money into credit markets by purchasing up to 750 billion euros ($820 billion) in bonds. The Bank of England cut its key interest rate to a record low of 0.1% and restarted its own program of money injections into the financial system. Australia’s central bank cut its benchmark lending rate to 0.25%. Central banks in Taiwan, Indonesia and the Philippines also cut rates.

They are trying to reduce the impact of a global recession that forecasters say looks increasingly likely as the United States and other governments tighten travel controls, close businesses and tell consumers and travelers to stay home.

The U.S. Federal Reserve unveiled measures March 19 to support money-market funds and the borrowing of dollars as investors in markets worldwide hurry to build up cash as insurance against falling asset prices.

Investors are jumpy due to uncertainty about the size and duration of the impact of the coronavirus outbreak and the spreading wave of business shutdowns meant to help contain it.

For most people, the coronavirus causes only mild or moderate symptoms, such as fever and cough, and those with mild illness recover in about two weeks. Severe illness including pneumonia can occur, especially in the elderly and people with existing health problems, and recovery could take six weeks in such cases.