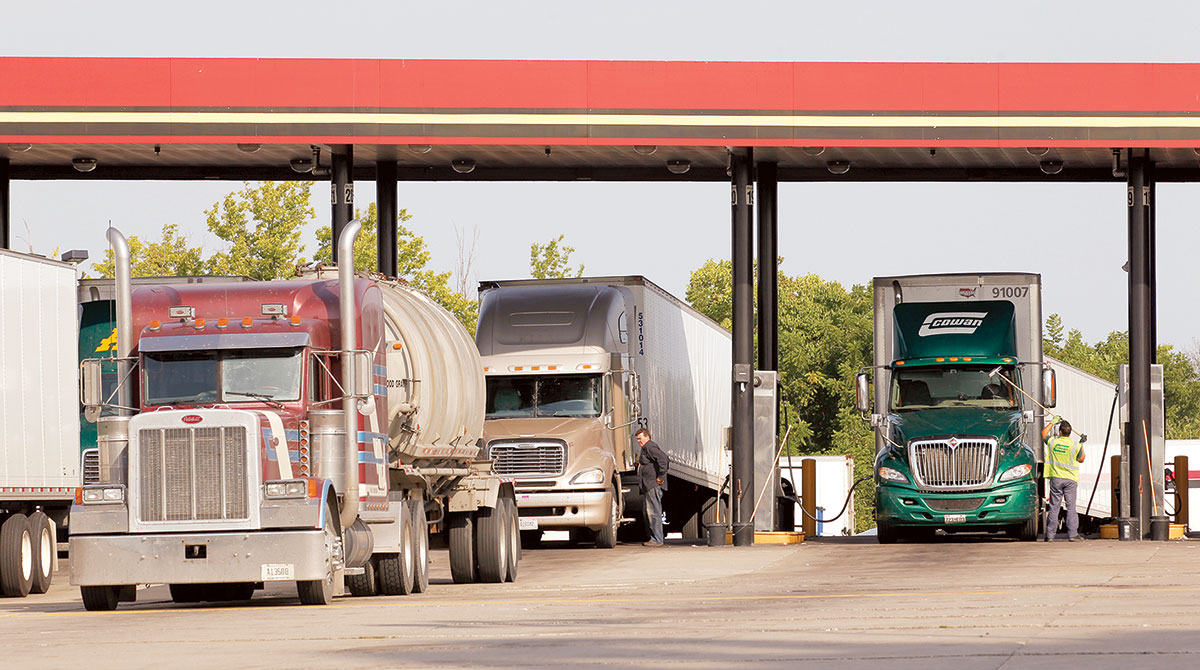 The price increase for diesel eased after consecutive gains of 9.7 cents and 9.9 cents, respectively. (John Sommers II for Transport Topics)

The national average for a gallon of diesel increased 7.1 cents to $3.143 a gallon, according to data released by the Energy Information Administration on March 8.

Trucking’s main fuel increased for the 18th consecutive week but eased after two consecutive gains of at least 9 cents that totaled 19.6 cents — the strongest since September 2017.

Diesel now costs 32.9 cents more a gallon than at this time in 2020. Meanwhile, the national average retail price for a gallon of gasoline went up 6 cents to $2.771.

The most expensive diesel is in the California region, which saw the price increase 5.1 cents to $3.897 a gallon from a week earlier and 19.2 cents from this time a year ago. And the Gulf Coast, which remains the EIA region with the least-expensive diesel, posted a gain of 9.2 cents. Diesel is now $2.929 a gallon and 35.2 cents more expensive than a year ago along the Gulf Coast.

The Rocky Mountain region saw the biggest week-over-week increase, jumping 14.8 cents per gallon to $3.131, and diesel now costs 32.8 cents more than at this time in 2020.

Price Futures Group oil industry analyst Phil Flynn told Transport Topics he anticipates prices will continue to creep up for the next several weeks. This is predicated on the world economy improving and oil-producing nations continuing to either limit production to hike prices or deal with production capacity demands. Such was the case in the United States where the Texas cold snap shut down numerous refineries.

“I think prices are still going to go up. But any relief at the pump is going to be short-lived this summer,” Flynn said. “Our expectation is we’ll be looking at upwards of $3 a gallon for gas during the summer driving season and diesel probably a premium to that. Diesel is already $3 a gallon, and I think we’re looking at $3.30 to $3.50 a gallon for diesel.”

While the spring and summer diesel and gasoline outlook is likely to include higher prices for several months, the latest Short-term Energy Outlook from EIA, which monitors prices through 2022, paints a more moderate picture. “EIA’s forecast of declining crude oil prices and a more balanced oil market reflect global oil supply surpassing oil demand during the second half of 2021,” the March 9 report said. 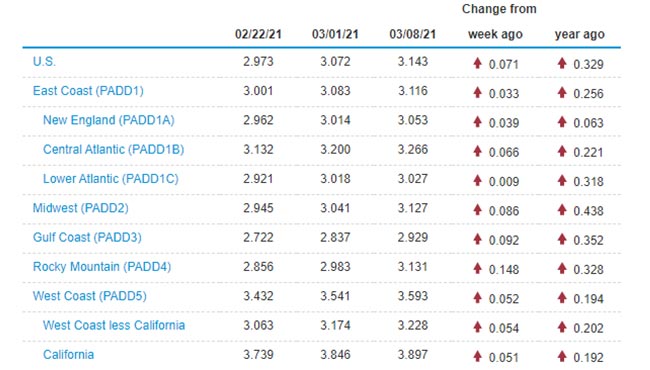 The EIA report said while energy prices in 2021 will be higher than in 2020 when demand plunged because of the COVID-19 pandemic, prices will level off in 2022.

EIA said that at least in the short term, crude oil prices are likely to remain high. 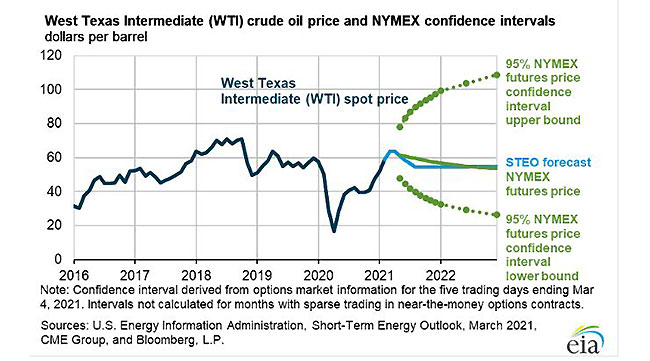 “The OPEC-Plus extension of existing supply cuts through April added significantly to near-term upward oil price pressures. Following the meeting, the Brent crude oil spot price settled at $67 a barrel on March 4, up 4% from the day before,” the report said. “EIA expects Brent prices will average between $65-$70 a barrel during March and April, more than $10 a barrel above EIA’s expectation last month. EIA continues to expect downward crude oil price pressures will emerge in the coming months as the oil market becomes more balanced.”

On March 4, the OPEC Plus members, which consists of the OPEC nations and Russia, Mexico, and eight other nations, scrapped plans to expand output and decided to keep production quotas tight through April.

Industry analyst Tom Kloza, founder of Oil Price Information Service, believes the OPEC Plus decision will keep prices high for several months. Still, he said gasoline and diesel demand is unlikely to recover to pre-pandemic levels, which will keep prices moderate, especially later in the year.

But in the short term, Flynn said truck drivers and consumers will pay more.

“I think we’re in for some summer gas pain,” he said. “You’ve got demand rising, supply constrained from refinery closures and outages, and you have oil production constraints and OPEC limiting production.