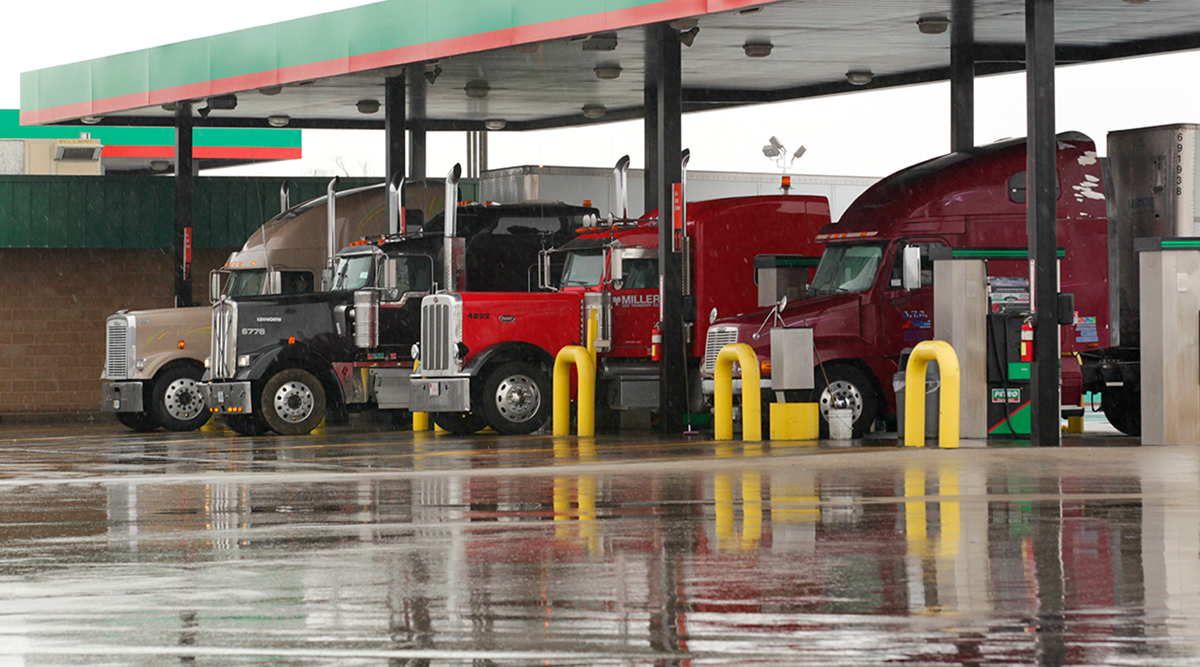 Truck fueling at a Petro truck stop off of Interstate 65 in Glendale, Ky. (John Sommers II for Transport Topics)

The national average price of diesel spiked by 5.8 cents per gallon, more than twice the previous high for the year, according to the Energy Information Administration’s weekly data released Nov. 16.

The previous highest weekly jump was 2.2 cents on June 22.

The price of unleaded gasoline climbed 1.5 cents per gallon nationwide to $2.111 a gallon. Still, that’s 48.1 cents a gallon less than it cost a year ago.

Rising demand for trucking’s main fuel is a key driver in the price surge.

Diesel’s price climbed in nine of the 10 regions in EIA’s survey. The biggest increase was in the Midwest, where diesel surged 7.8 cents per gallon to $2.339 a gallon. Diesel remains 63.2 cents less expensive there than a year ago.

The most expensive diesel remains in California, the only area in the survey where it exceeds $3 a gallon. Diesel there rose only three-tenths of a cent to $3.240, and costs 76.3 cents a gallon less than in the 2019 period.

The least expensive diesel is in the Gulf Coast, which is home to much of the nation’s oil and gas production as well as its refining capacity.

The price of West Texas Intermediate crude, the industry’s benchmark, has surged in recent weeks to well above $41 a barrel. It was $36.98 on Nov. 2.

Meanwhile, the weekly Baker Hughes rig count of operating oil rigs in the United States and Canada continues to slowly increase. In the U.S., the number of rigs rose by 12 to 312. Still, that’s down by 494 rigs compared with this time last year. In Canada, 89 rigs are operating, up three from the previous week but still down 45 from 2019.

Baker Hughes ranks No. 66 on the Transport Topics Top 100 list of the largest private carriers in North America.

A Nov. 10 report from EIA also said that because of the pandemic, and more people working at home this winter, the country is expected to use 5% more energy for space heaters for home heating, 5% more electricity and 1% more propane and natural gas for other uses, such as appliances, when compared with the winter of 2019.

But for homes and businesses that heat their buildings with home heating oil, the increase in usage is expected to be balanced by the lower price for oil and the abundant supply available on the market.

From a molecular standpoint, diesel and home heating oil No. 2 are nearly identical. Both are midlevel or midweight distillates that produce about the same amount of heat and can be burned by the same systems

Flynn says oil traders are hopeful that there will be an increase in diesel and gasoline usage now that it appears COVID-19 vaccines could be available on a limited basis possibly by the end of the year.

He added economies in several other nations, including China, are bouncing back from the pandemic sooner and stronger than the U.S., and that’s pushing world diesel demand up.

“A lot of it is in Europe as well, and we’re seeing the Chinese refine a record amount of diesel recently,” he said. “We’re also seeing stronger economic growth and demand in China, and the international demand for diesel has been pretty strong at a time when we typically see slower seasonal demand. The international markets are tighter, and that’s why we’re seeing prices going up.”