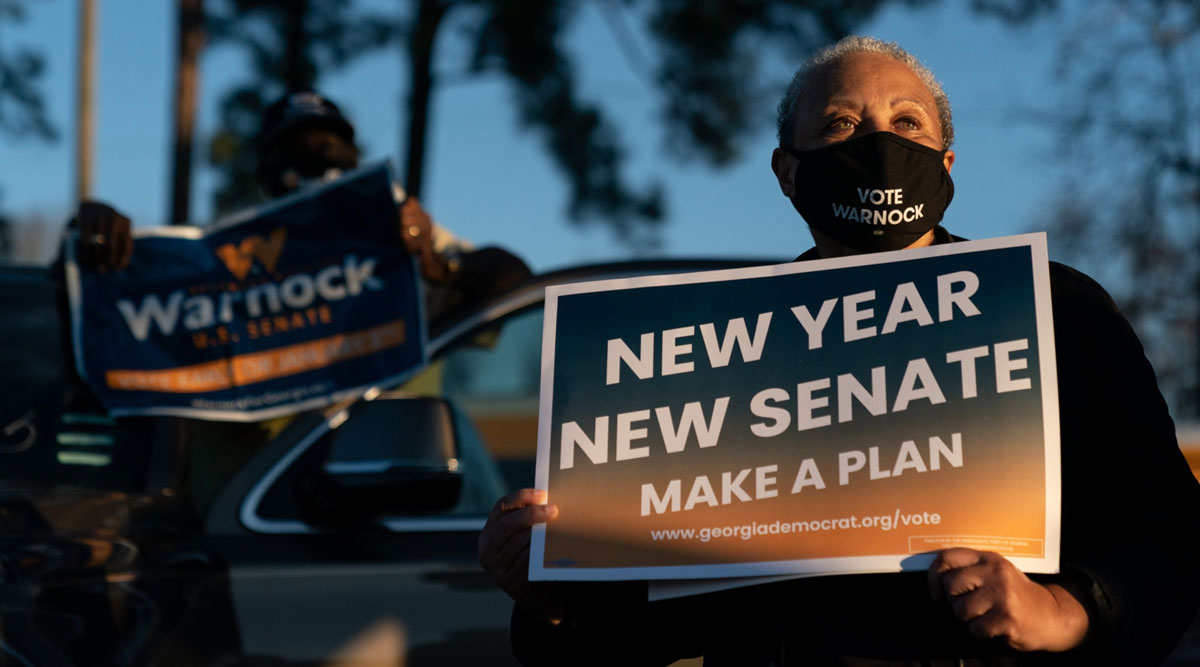 A person holds a "New Year New Senate" sign during a "Get Out the Vote" event in Georgia on Jan. 3. (Elijah Nouvelage/Bloomberg News)

Chances of another federal stimulus package got a boost as Democrats swept this week’s Senate runoff elections in Georgia, offering the prospect of more support for people and businesses hammered by the pandemic.

With Raphael Warnock defeating Kelly Loeffler, and Jon Ossoff prevailing over David Perdue, the result creates a 50-50 split between Republicans and Democrats in the Senate for two years. But since Vice President-elect Kamala Harris votes in the case of a tie, the victories mean Democrats will effectively control both the presidency and Congress.

And that has important implications for the nation’s economic recovery.

In the near term, that could result in a $750 billion to $1 trillion pandemic relief package this year on top of the $900 billion in aid signed into law last month, Matthew Luzzetti, chief U.S. economist at Deutsche Bank AG, said earlier this week. The precise impact of a package on economic growth would depend on the details, but it presents “a sizable upside risk to our growth forecast” in 2021, currently 4.3%.

Economists predict additional aid could include support for state and local governments, another extension of enhanced jobless benefits and more stimulus payments like the $2,000 direct payments supported by both President-elect Joe Biden and President Donald Trump.

Jefferies economists said in a note that they see Democratic victories in both seats spurring an additional $1 trillion of stimulus in the next few months, adding about 2 percentage points to economic growth over the next two years.

U.S. stocks and long-term Treasury yields jumped Jan. 6 with the vote count nearly complete, though the S&P 500 Index gave up more than half its gain after Trump supporters stormed the Capitol building and disrupted the process for finalizing Biden’s victory in the Electoral College. Traders also boosted expectations for inflation in coming years, as five-year break-even rates steadied around a two-year high.

The unemployment rate, which many economists are already expecting to come down substantially this year amid widespread vaccinations and a snapback in activity, could be slightly lower at the end of the year — maybe 0.2 or 0.3 percentage points — as a result of a Democratic sweep compared with Republican control of the Senate, said Lewis Alexander, chief U.S. economist at Nomura Securities International Inc.

But in the longer term, a razor-thin majority in both the House of Representatives and the Senate will make it tough to get agreement among Democrats on bigger policy shifts, Luzzetti said.

The need to get consensus among senators ranging from Bernie Sanders on the left to moderate Joe Manchin will likely constrain Biden’s policy goals. Biden, for example, pledged to raise taxes on corporations and people earning more than $400,000 a year during his campaign.

With a 50-50 split, Goldman Sachs Group Inc. analyst Alec Phillips expects tax increases to be around a quarter of what the campaign proposed.

One potential area for bipartisan compromise is infrastructure, which could have a positive impact on the economy in several ways including job creation. If passed later this year, it could support the economy in 2022.

Reade Pickert, Julia Fanzeres and Olivia Rockeman were the primary contributors to this report.