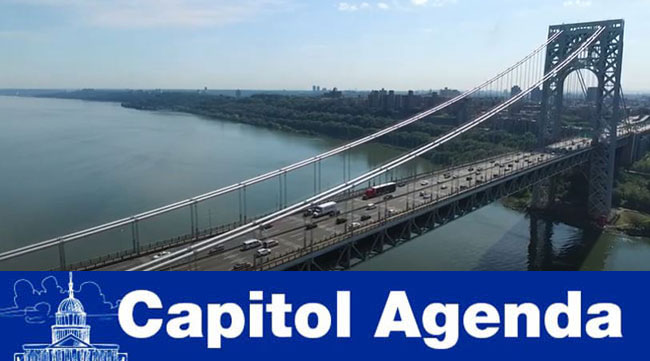 The New Jersey side of the George Washington Bridge is the site of the worst bottleneck traffic in the country, according to an ATRI report released earlier this year. (DroneViews via YouTube)

Earlier this year, a report by the American Transportation Research Institute assigned a ranking to the country’s most severe bottlenecks for trucks.

The New Jersey side of the George Washington Bridge garnered the dubious distinction of topping ATRI’s list of such bottlenecks, with corridors in Atlanta, Chicago and Los Angeles, for instance, listed as homes for other hot spots.

The reaction from stakeholders about ATRI’s list was obvious: Improvements are needed to ameliorate traffic along economic centers. After all, since the flow of trucks is essential to commerce, bottlenecks are counterproductive.

In the coronavirus era, bottlenecks have not been restrictive forces on our highways. The same can't be said for many bridges.

In a separate, recently released report, the American Road and Transportation Builders Association took aim at the country’s spans. Relying on federal data, the report determined that nearly 47,000 bridges demonstrate a need for rehabilitation. Simply stated, the structures are structurally deficient. Long-standing problems with bridges that started to show their age have hindered regional economies way before the coronavirus pandemic crippled the flow of commerce.

Industry stakeholders express concern about transportation inadequacies they say should have been addressed years ago. With so much focus on the pandemic, devoting attention to a nationwide rebuilding campaign could help with the economic response, they argue.

Rep. Peter DeFazio (D-Ore.), chairman of the House transportation committee, plans to unveil a major highway bill this year. He insisted ARTBA’s research was the latest proof for a need to repair infrastructure networks.

Most policymakers know the problems. It is the funding aspect that fails to inspire consensus. The scramble for cash to prop up the Highway Trust Fund will continue if DeFazio’s fellow policymakers fail to address the account’s looming insolvency. The fund is backed by insufficient revenue from the gas and diesel taxes. If a long-term fix for the fund is approved — perhaps, by increasing the fuel tax – upgrades to surface transportation networks would be realized.

“I am again encouraging President [Donald] Trump and my congressional colleagues to work together to finally pass wide-sweeping legislation to bring our transportation infrastructure into the 21st century,” DeFazio said soon after ARTBA’s report was unveiled. “The cost of doing nothing is too high.”

For his part, Trump has expressed support for funding infrastructure programs as part of the economic response to the pandemic. Fellow Republicans in control of the Senate not so much. “Our country has to be rebuilt,” the president said April 5. “They spent all this money in the Middle East — $8 trillion. We’re up to now $8 trillion in the Middle East. We got to rebuild our country. OK?”

OK. Maybe then congestion along the George Washington Bridge would be minimized.

April 14, 9 a.m.: Politico hosts a webcast about the economy.

The response to the coronavirus has shifted focus from autonomous vehicles legislation, insiders tell Transport Topics.

If you’re gonna use your one shot on tv to go out in a blaze of glory, you do it like this:
pic.twitter.com/WRKbNmLIYi

We can build a more resilient economy with robust investments in smart, safe infrastructure, including bringing clean water and the promise of high-speed broadband to every American community.