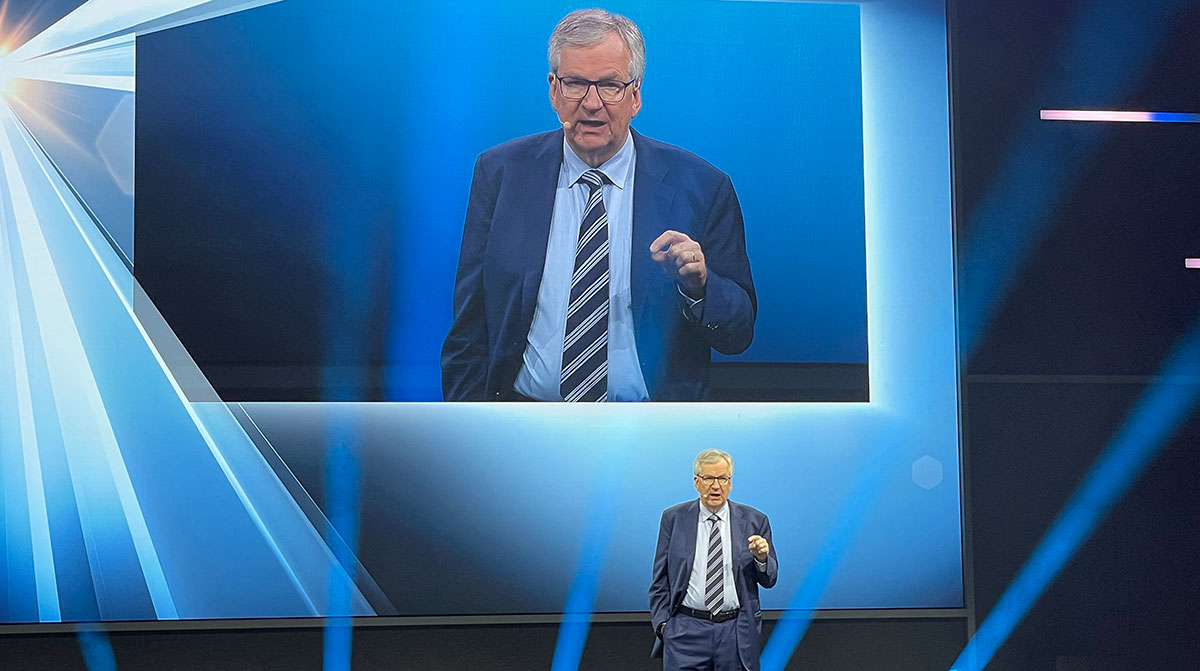 "For the sustainable transport of the future, having the right vehicles alone is not enough. We also need the right infrastructure," Daimler Truck CEO Martin Daum says. (Joe Howard/Transport Topics)

HANOVER, Germany — Daimler Truck CEO Martin Daum said his company is pursuing a clean-energy strategy built around electric and fuel cell technology, setting aside natural gas as a component of the plan.

“We are focusing on battery and fuel cell because we are convinced that our industry will need a dual strategy for the sustainable transport of the future,” Daum said in remarks focused on the company’s global operations during a Sept. 18 media briefing from the IAA Transportation 2022 conference.

Daum stressed natural gas has no place in that strategy.

"We are also convinced that we do not need a triple strategy that includes natural gas, because gas-powered drives are just an expensive bridging technology that still relies on fossil fuels and emits CO2," he said. "At Daimler Truck, we are sharply focused on truly emission-free technologies.”

That focus was evident in Daimler’s product reveals at the show, including the Mercedes-Benz eActros Long Haul concept for global markets. The next-generation electric truck is targeted for release in 2024 and will have a range of 500 kilometers, or about 310 miles. Its battery technology is likely to eventually make its way to the Freightliner eCascadia in North America. Daimler also unveiled the next generation of the Mitsubishi Fusu eCanter global medium-duty electric truck. The Fuso brand exited the North American market.

These product launches at one of the trucking industry’s biggest international shows — and one that hasn’t been held since 2018 — served as a harbinger for Daimler’s longer-term plans to offer its global customers a broader range of zero-emission vehicles, Daum said.

“In five short years, we will have a comprehensive, zero-emission product portfolio with vehicles that will serve the full range of urban and regional, to the most demanding long-haul use cases,” he said. “By 2030, we expect our zero-emission vehicles to account for up to 60% of our total vehicle sales.”

This projection applies to countries in EU30 nations, the company said in a news release.

Daum acknowledged, however, that more broad-based evolution across the transportation industry will take time.

Daimler is working with fellow truck makers Volvo Group and Traton on an initiative to build out electric-charging infrastructure across Europe. Daimler also has formed a joint venture with Volvo to develop hydrogen fuel cell technology. Daum believes it is this kind of industry commitment to achieving shared goals that can help drive change.

“In the years to come, demand for green energy will increase many times over, not just in our industry but across the entire economy,” he said. “So using electricity directly off the grid alone will not be sufficient. We also need to import and store green energy, and the best area to do that is green hydrogen.

Daum acknowledged that building this infrastructure is a huge task that will take a long time, so he called on the broader industry to make it a priority.

“All stakeholders must join together to work on it on all levels at the same time,” he said. “On energy generation, energy distribution and even the physical points where the vehicles must be charged.”

Daum added, “I want to encourage all stakeholders to look at this infrastructure task as a tremendous opportunity. As we speak, a huge new market is coming into existence. And as we know from past experience, there is hardly anything more powerful than market forces once they are set into motion.”

The market forces steering another area of growth — automated driving — have led Daimler to focus on collaboration with two companies: Waymo and Torc Robotics. The latter company is owned by Daimler.

“In my opinion, there are only two companies,” Daum said during a Sept. 19 briefing with a small group of North American media about the companies angling to gain a foothold in automated driving. He said he is watching all of the companies in the space but believes Waymo and Torc have the best resources and talent.

Furthermore, be believes that the two companies’ use of chassis with redundant systems puts them ahead of competitors who don’t. Currently, Daimler builds trucks with redundant technology for its automated partners in a separate shop in Daimler Truck North Americas’ hometown of Portland, Ore. If the volumes get high enough, Daum said, they could be built on the regular production line.

This spirit of collaboration also extends to the future of diesel engines. Daimler already has decided to use engines from Cummins exclusively in its medium-duty trucks due to that company’s larger scale in that segment.

Of that move, Daum said, “It makes no sense — for a small platform — to invest all the money in a market which, over time, will shrink — even if it’s only half –it’s not feasible.”

He added, “Cummins’ starting point is several times larger than us.”