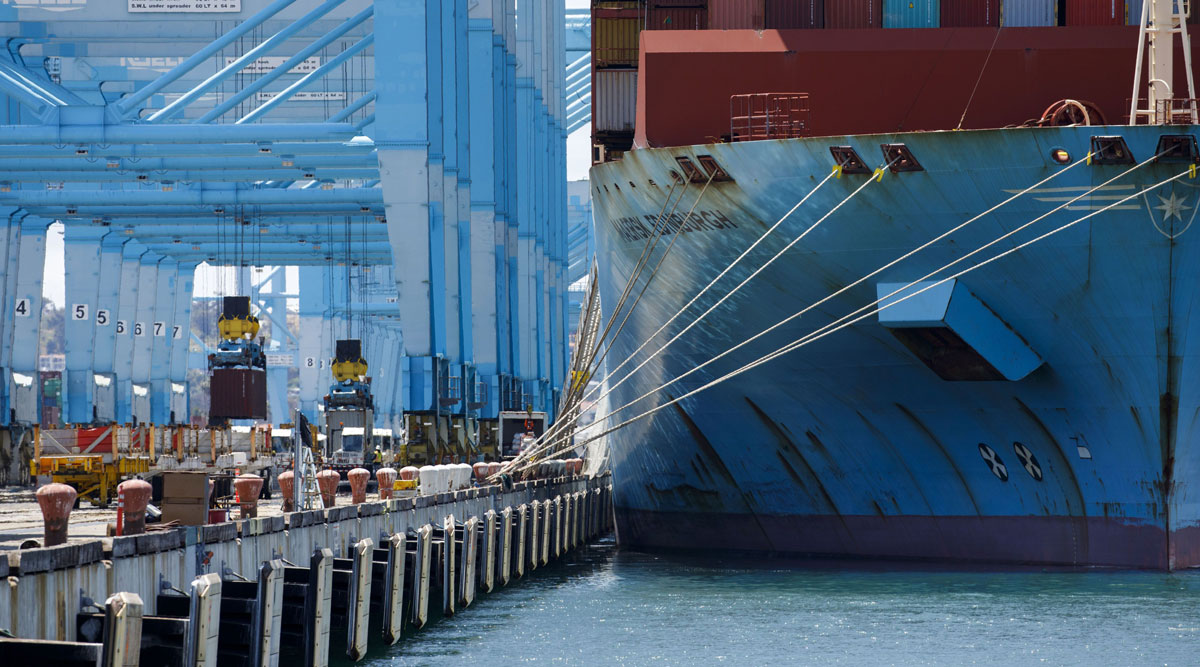 Shipping containers are unloaded from a Maersk cargo ship at the Port of Los Angeles in May 2019. (Patrick T. Fallon/Bloomberg News)

The world’s largest container line is bracing for a historic slump in demand after emergency lockdowns across the globe left international trade in tatters.

A.P. Moller-Maersk A/S, which controls about one-fifth of the global fleet used to transport goods by sea, says the fallout from COVID-19 will drive volumes down by as much as 25% this quarter. The Maersk Group ranks No. 4 on the Transport Topics Top 50 list of the largest global freight carriers.

The bleak signal from Maersk follows a warning from the World Trade Organization last month that the pandemic could result in the worst collapse in international trade flows since World War II.

Copenhagen-based Maersk said the coronavirus pandemic has already “had a significant impact on the activity level.” The company now sees the global container market contracting this year, compared with a previous forecast for growth of somewhere between 1% and 3%.

Maersk shares fell as much as 6.2% in Copenhagen. Its market value has dropped more than 30% this year, to about $18.5 billion.

Nearly all regions will suffer double-digit declines in trade volumes in 2020, according to the WTO. Exports from North America and Asia will be hit hardest, it said in April. The global container industry has had to idle about 13% of its fleet worldwide, according to data compiled by Alphaliner.

Maersk CEO Soren Skou lashed out at what he characterized as an unfair advantage he said some Asian competitors have been given thanks to access to state aid. Skou called the situation “totally unacceptable” and urged the European Union to “do something about” it.

Maersk estimates that global container trade fell 4.7% in the first quarter, with COVID-19 hitting the supply chain and demand.

“COVID-19 and the subsequent country lockdowns have led to a severe downturn in production and demand in most parts of the world,” Maersk said. “While some countries are slowly beginning to open up, others are still only in the early stages.”

In an interview with Bloomberg Television, Skou said he’s still expecting “some sort of U-shaped recovery.”

“Right now, we believe we are at the bottom, and we will probably be here for a while,” he said. “But in the third quarter, the fourth quarter, we should start to see some recovery.”

Though the global outlook is grim, Maersk managed to deliver growth in its operating profit in the first quarter. Maersk’s revenue increased slightly to $9.57 billion, which was better than the $9.36 billion estimated by analysts.