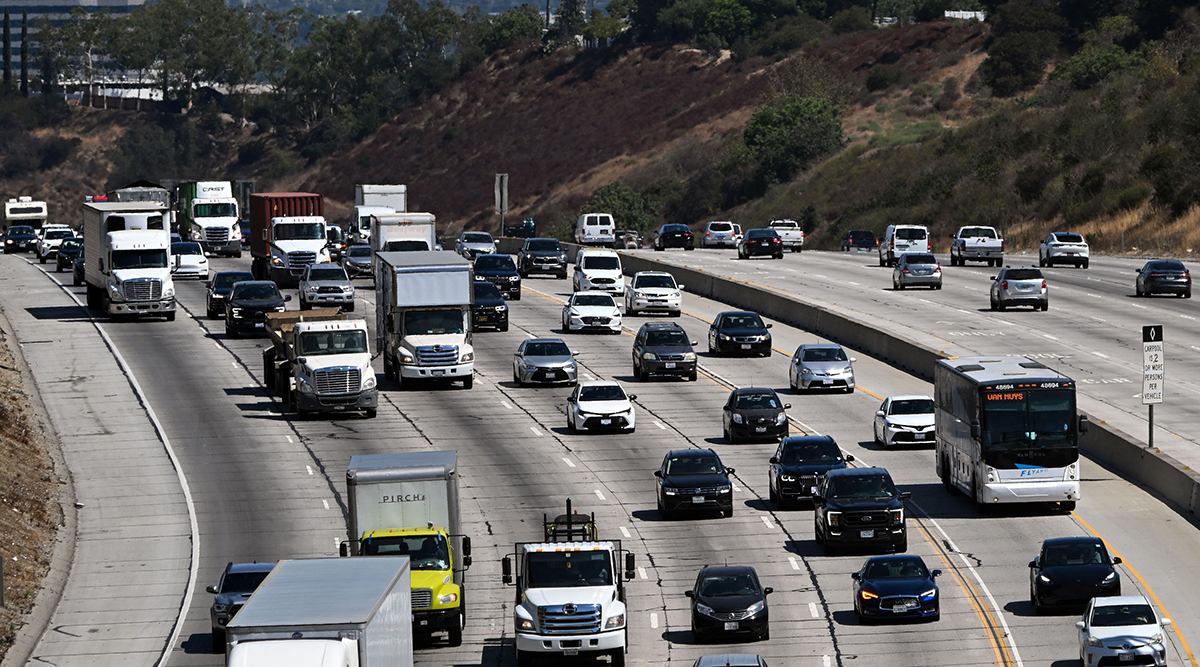 Vehicles drive in traffic on the 405 freeway through the Sepulveda Pass in Los Angeles. (Patrick T. Fallon/AFP/Getty Images via Tribune Content Agency)

WASHINGTON — As electric vehicles appear more and more to be the future of transportation in America, the decades-old method of funding the nation’s roads and bridges with gasoline taxes will soon be a relic of its past. Yet, the last time Congress addressed declining revenues in the federal Highway Trust Fund due to the growth of more fuel-efficient vehicles and EVs, it punted much of the preliminary planning to the states.

When the $1.2 trillion bipartisan infrastructure law was enacted in 2021, Congress included $125 million for states to develop new financing plans for infrastructure programs based on motorists paying fees for the miles they drive rather than for the amount of fuel they use as well as for a federal effort to synthesize the various state plans and create a national funding plan.

The legislation follows a movement toward the so-called vehicle-per-mile taxes in some states, along with higher registration fees for EVs to make up for the revenue they won’t produce from fuel taxes.

But the question remains whether increased costs for buying and using EVs at the state level will undermine Washington’s goal of cleaning up the transportation sector, the nation’s biggest source of greenhouse gases, through tax incentives for the purchase of zero-emission cars and trucks.

“What Congress is trying to do with electric vehicles is create a whole new fleet that is cleaner for environmental purposes, but it’s also true that you’re then cannibalizing the existing transportation revenue system,” said Douglas Shinkle, transportation program director at the National Conference of State Legislatures. “Lawmakers can walk and chew gum — they realize the benefits of EVs — and also be realistic that they’re going to have to figure out a way to capture revenue from different kinds of vehicles that don’t use gas.”

Congress hasn’t acted on its own to reverse the declining revenues in the Highway Trust Fund by refusing to increase federal gas taxes, which have been stuck at 18.4 cents per gallon since 1993. It neglected to act again last November when it reauthorized Federal Highway Administration programs for five years through the bipartisan infrastructure law, with a transfer of $118 billion from the general fund to make up for the declining gas tax revenues.

States have done a better job of keeping up with reduced fuel consumption, with 33 of them raising their gas taxes between 2013 and 2021, according to the Urban Institute, but they’re still feeling the pinch.

“Between inflationary impacts on construction costs and the fact that there are more and more vehicles on the road that don’t use gas … states are very much seeing this degradation of their revenue from the state gas tax,” said Shinkle. “And a lot of transportation stakeholders recognize that a new kind of user fee source for these highly fuel-efficient or electric vehicles is needed.”

Oregon enacted the first bill to study road user charges, an alternative to gas taxes that charges drivers for their use of a road system based on how many miles they travel, in 2001. Other states and per-mile user fee advocates have also been considering the gas tax alternative since the early 2000s.

“We floated along for over 30 years, and it was in 2008 when the Highway Trust Fund for the first time, due to lack of increases from the gas tax, was going into the toilet,” said Jack Basso, chair of the nonprofit Mileage-Based User Fee Alliance. “Since then, we’ve been going on year after year of authorizations injecting cash with the idea that … we’ve got to find another way to collect revenue.”

Congress is attempting to piggyback on those efforts by encouraging more states along with the federal government to launch pilot programs establishing vehicle-miles-traveled, or VMT, fees.

Following the states’ lead, Congress created a program in the 2015 federal surface transportation bill that provides grants for states to launch pilot programs for developing alternatives to fuel taxes. The Surface Transportation System Funding Alternative Program was reauthorized in the bipartisan infrastructure law and a federal version was added, providing the Transportation Department with $50 million over the next five years to find ways to supplant the gas tax by utilizing the state pilot projects.

Although 14 states have received federal funding for pilot programs, only three — Oregon, Utah and Virginia — have officially adopted alternatives for infrastructure funding. 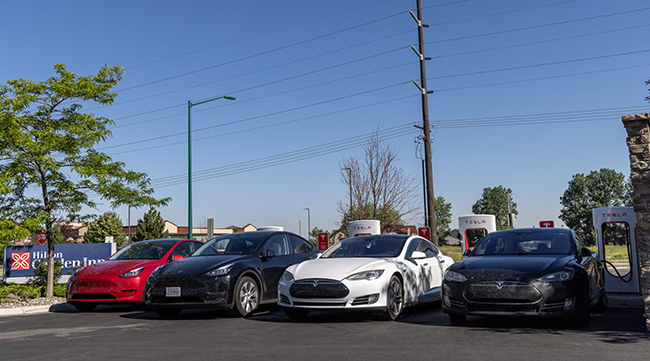 The three states’ programs slightly differ, but they all allow electric and hybrid vehicle drivers to forgo an additional annual registration fee for fuel-efficient vehicles, which can cost up to $200 in some states, if they sign up for a road-user charges program.

The pitch is that EV drivers could save money by paying by the mile, especially in urban areas where vehicles are used for shorter distances. But state governments are still convincing drivers considering per-mile fees that their location and other vehicle data will stay private.

In Oregon, EV drivers can choose between three mileage-tracking programs run by Japanese auto parts company Bridgestone, vehicle data business Insurance & Mobility Solutions and the state Transportation Department. All three options provide drivers with a plug-in device that either uses GPS to track when drivers go out of state, thus stopping the charges, or one without GPS, which tracks only miles driven.

Some states are also considering the plug-in mile-tracker option, while others are testing programs based on odometer readings at annual vehicle safety inspections, which some states require. Regardless, drivers have to choose between potentially overpaying for miles driven in another state or trusting a government-contracted company with their data, especially as states look ahead to creating mandatory VMT programs.

“This is going to be one of the big questions, and the thought process at the moment is to give drivers and consumers more choices,” Shinkle said. “The technical piece of these programs actually aren’t much of an obstacle — it’s more building public awareness and acceptance.”

And states’ leadership on testing user-fee programs provides an advantage to the federal government as it looks to create its own nationwide gas tax alternative, Basso said, because DOT can learn from smaller programs’ mistakes.

“Think of it this way: We’ve got 1,000 flowers blooming out there in the states, trying various methods and many sophisticated terms or other simplified terms,” he said. “And that’s exactly what we hoped would happen, so we can come up with a really good synthesis of what works and what direction to go in.” 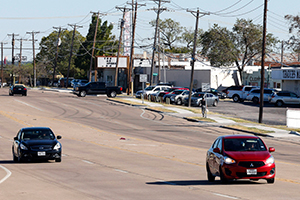 But scaling a state pilot program up to a nationwide level won’t come without additional issues.

A major one is that the federal government can’t rely on extra registration fees for electric and hybrid vehicles, a program that 30 states now use to fund highway infrastructure, since vehicles aren’t registered at the federal level. Another is getting all states to participate in a federal program that runs on a volunteer basis, as some states have favored other programs like registration fees. Then there’s the privacy issue too.

Congress also runs the risk of upsetting EV and hybrid vehicle drivers who have been pitched money-saving promises like tax incentives and low fuel costs for making the switch from traditional gas vehicles.

But Washington may not have a choice, as the Highway Trust Fund shortfall is expected to reach $195 billion in the next 10 years if the funding mechanism remains the same.

Senate Environment and Public Works Chairman Tom Carper (D-Del.), who has been a proponent of alternative user fees, specifically worked with Democrats on the committee to avoid tension between Biden administration goals to lower EV costs and installing a Highway Trust Fund revenue solution, an aide said. They added that other proposed fixes for the fund, like a federal registration fee, would be more at odds with EV tax incentives than a per-mile fee prorated over the lifetime of the vehicle.

But the federal solution to Highway Trust Fund insolvency largely lies with DOT now, through its study of state efforts.

DOT already missed a February deadline to put together a board tasked with overseeing an alternative funding system, the first step mandated by infrastructure law. The agency has yet to provide an update on the program.