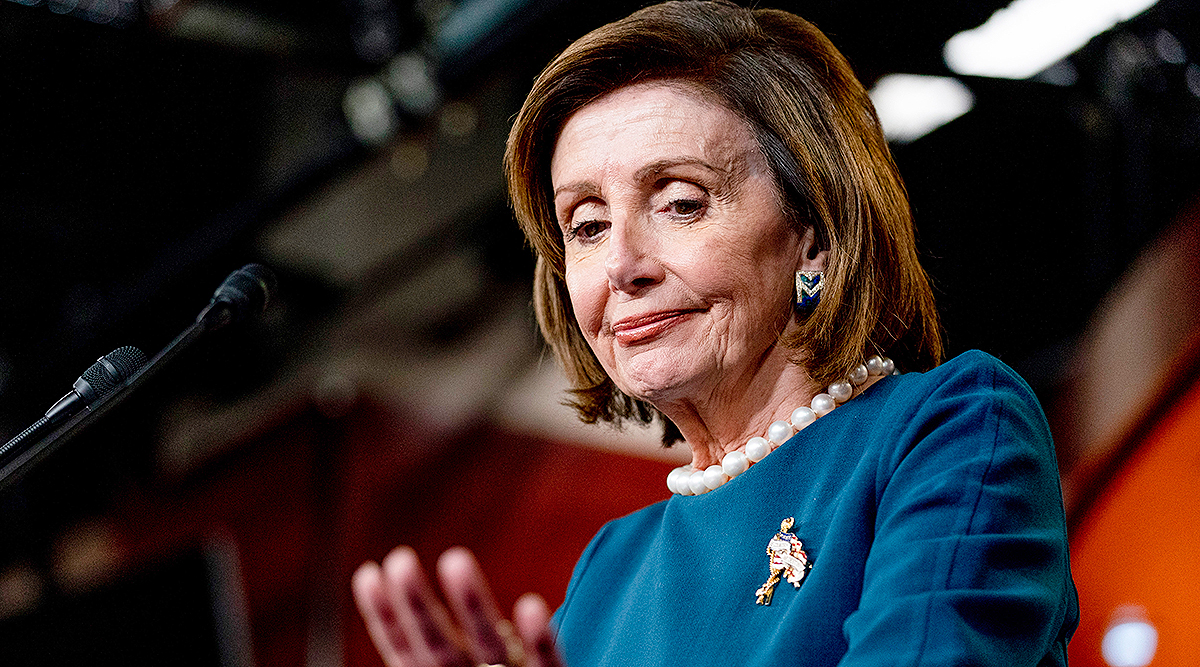 House Speaker Nancy Pelosi looks at a ring on her finger as she listens to a question from a reporter Oct. 28. (Andrew Harnik/Associated Press)

WASHINGTON — President Joe Biden announced Oct. 28 that he and Democrats in Congress have reached a “historic” framework for his sweeping domestic policy package. But he still needs to lock down votes from key colleagues for what’s now a dramatically scaled-back bill.

Congress approved an extension to Dec. 3 of the Oct. 31 deadline for transportation funds that were at risk of expiring, an action necessary after the House of Representatives failed to take action on the $1 trillion infrastructure bill already approved by the Senate.

Eager to have a deal in hand before his departure late in the day for global summits, Biden made his case privately on Capitol Hill to House Democrats and publicly in a speech at the White House. He’s now pressing for a still-robust package — $1.75 trillion of social services and climate change programs — that the White House believes can pass the 50-50 Senate.

The day’s fast-moving developments put Democrats closer to a hard-fought deal, but battles remain as they press to finish the final draft in the days and weeks ahead.

“Let’s get this done,” Biden exhorted.

“It will fundamentally change the lives of millions of people for the better,” he said about the package, which he badly wanted before the summits to show the world American democracy still works. 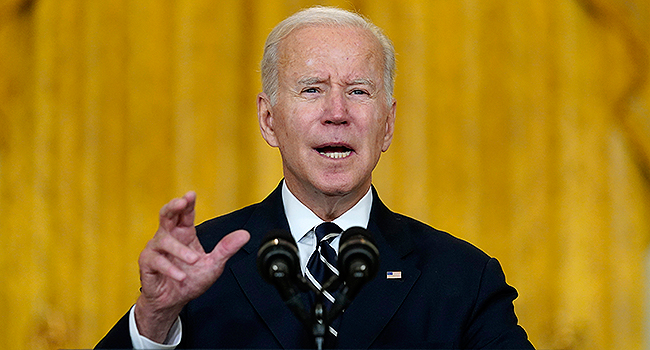 President Joe Biden speaks about his domestic agenda from the East Room of the White House Oct. 28. (Susan Walsh/Associated Press)

Together with a nearly $1 trillion bipartisan infrastructure bill, Biden claimed the infusion of federal investments would be a domestic achievement modeled on those of Franklin Roosevelt and Lyndon Johnson.

“I need your votes,” Biden told the lawmakers at the Capitol, according to a person who requested anonymity to discuss the private remarks.

But final votes will not be called for some time. The revised package has lost some top priorities, frustrating many lawmakers as the president’s ambitions make way for the political realities of the narrowly divided Congress.

Paid family leave and efforts to lower prescription drug pricing are now gone entirely from the package, drawing outrage from some lawmakers and advocates.

Still in the mix, a long list of other priorities: Free prekindergarten for all youngsters, expanded health care programs — including the launch of a new $35 billion hearing aid benefit for people with Medicare — and $555 billion to tackle climate change.

There’s also a one-year extension of a child care tax credit that was put in place during the COVID-19 rescue and new child care subsidies. An additional $100 billion to bolster the immigration and border processing system could boost the overall package to $1.85 trillion if it clears Senate rules.

One pivotal Democratic holdout, Sen. Kyrsten Sinema of Arizona, said, “I look forward to getting this done.”

However, another, Joe Manchin of West Virginia, was less committal: “This is all in the hands of the House right now.”

The two Democrats have almost single-handedly reduced the size and scope of their party’s big vision, and are crucial to sealing the deal.

Republicans remain overwhelmingly opposed, forcing Biden to rely on the Democrats’ narrow majority in Congress with no votes to spare in the Senate and few in the House.

Taking form after months of negotiations, Biden’s emerging bill would still be among the most sweeping of its kind in a generation, modeled on New Deal and Great Society programs. The White House calls it the largest-ever investment in climate change and the biggest improvement to the nation’s healthcare system in more than a decade.

In his meeting with lawmakers at the Capitol, Biden made clear how important it was to show progress as he headed to the summits.

“We are at an inflection point,” he said. “The rest of the world wonders whether we can function.”

With U.S. elections on the horizon, he said it’s not “hyperbole to say that the House and Senate majorities and my presidency will be determined by what happens in the next week.”

At one point, Biden “asked for a spirited enthusiastic vote on his plan,” said Rep. Richard Neal, D-Mass.

Twice over the course of the hourlong meeting Democratic lawmakers rose to their feet and started yelling: “Vote, vote, vote,” said Rep. Gerald Connolly of Virginia.

Biden’s proposal would be paid for by imposing a new 5% surtax on income over $10 million a year, and instituting a new 15% corporate minimum tax, keeping with his plans to have no new taxes on those earning less than $400,000 a year, officials said. A special “billionaires tax” was not included.

Revenue to help pay for the package would also come from rolling back some of the Trump administration’s 2017 tax cuts, along with stepped-up enforcement of tax-dodgers by the IRS. Biden has vowed to cover the entire cost of the plan, ensuring it does not pile onto the debt load.

With the framework being converted to a 1,600-page legislative text for review, lawmakers and aides cautioned it had not yet been agreed to.

Rep. Pramila Jayapal (D-Wash.), the progressive caucus leader, said: “We want to see the actual text because we don’t want any confusion and misunderstandings.” 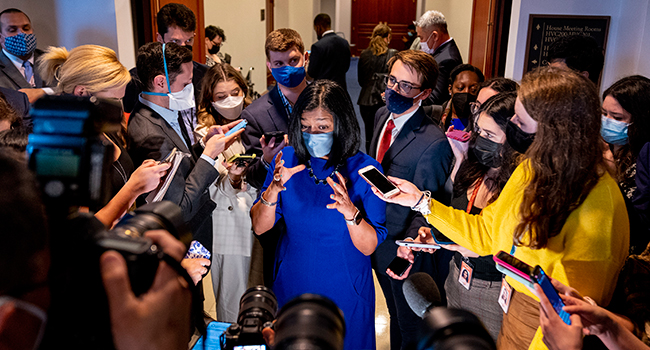 Rep. Pramila Jayapal speaks to reporters as she walks out of a House Democratic Progressive Caucus meeting. (Andrew Harnik/Associated Press)

House Speaker Nancy Pelosi said Biden asked the House to vote on the related $1 trillion infrastructure bill that already cleared the Senate but became tangled in deliberations over the broader bill. But others said they did not hear an urgent request.

"When the president gets off that plane we want him to have a vote of confidence from this Congress,” Pelosi told lawmakers, the person at the private meeting said.

But no votes were scheduled. Progressives have been withholding their support for the roads-and-bridges bill as leverage until they have a commitment that Manchin, Sinema and the other senators are ready to vote on Biden’s bigger package.

Rep. Cori Bush (D-Mo.) shared her own story of making “pennies” at low-wage work, struggling to afford child care and wanting to ensure constituents have better.

“We need both bills to ride together. And we don’t have that right now,” Bush said. “I feel a bit bamboozled because this was not what I thought was coming today.”

The two holdout Democratic senators Manchin and Sinema now hold enormous power, essentially deciding whether or not Biden will be able to deliver on the Democrats’ major campaign promises.

Sinema has been instrumental in pushing her party off a promise to undo the Republicans’ 2017 tax cuts. And Manchin’s resistance forced serious cutbacks to a clean energy plan, the elimination of paid family leave and the imposition of work requirements for parents receiving the new child care subsidies.

At the same time, progressives achieved one key priority — Vermont Independent Bernie Sanders’ proposal to provide hearing aid benefits for people on Medicare. However, his ideas to also include dental and vision care were left out.

Other expanded health care programs build on the Affordable Care Act by funding subsidies to help people buy insurance policies and coverage in states that declined the Obamacare program.

Overall, the new package also sets up political battles in future years. The child care tax credit expires alongside next year’s midterm elections, while much of the health care funding will expire in 2025, ensuring a campaign issue ahead of the next presidential election.

USDOT Awards $1B in Grants for Infrastructure Projects

Drone Demo Offers a Taste of the Future of Delivery