B-Line
This story appears in the April 4 print edition of Transport Topics.

Several companies are testing a wide range of innovative delivery ideas to gain an edge in growing logistics and transportation space.

Perhaps the method that has garnered the most publicity is the use of drones. Amazon.com is seeking federal approval to use a Prime Air service that would involve drones delivering packages up to 5 pounds within 30 minutes.

Parcel carriers DHL Express and UPS Inc. are testing unmanned aerial vehicles, with DHL using a “parcelcopter” to deliver medications to the North Sea island of Juist and UPS investing in CyPhy Works, a Massachusetts company that has developed drones for emergency shipments. 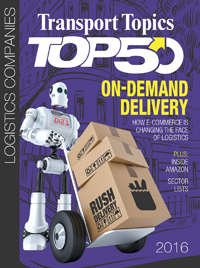 Amazon spokeswoman Kelly Cheeseman said the company is conducting tests with a team that includes a former NASA astronaut and the designer of the Boeing 787 wingtip. “Testing is going well, and we are very pleased with the progress it has enabled,” she said.

Companies are even trying to integrate the ordering and delivery process. Amazon has filed a patent to use 3-D printing in delivery — perhaps even printing items in the truck. Google has applied for a patent for “an autonomous road vehicle” with a “package securing subsystem,” according to its application.

Elsewhere, Starship Technologies, created by two founders of Skype, is developing a self-driving robot that transports goods the last mile via sidewalks.

The robots cost several thousand dollars but could reduce the cost of delivery below $1, company officials said. The vehicle can hold the equivalent of three shopping bags and uses nine cameras to compare the environment with a map stored in the vehicle’s memory to help it react to obstacles and pedestrians. Allan Martinson, chief operating officer, said the robots use much less energy than drones (about 20 watts of power, which is less than a light bulb), and won’t be seen by the public as a threat or privacy risk.

Packages encapsulated in the robot are removable only by the recipient’s phone, reducing the threat of theft, Starship said. The robots can protect themselves by audibly warning potential thieves they are being recorded and that security will be called.

Martinson said the robots have been tested overseas and soon will start in the United States.

Zero-emissions vehicles, built by citEcar Electric Vehicles, are being outfitted with a delivery box up to 15 feet long. Founder and President Justin Jackrel said it costs 1 to 2 cents a mile to operate.

The vehicles can travel on roads with speed limits up to 35 mph and travel up to 105 miles on a charge.

Jackrel said his vehicles, most about 10 feet long, can more easily navigate residential neighborhoods. He said his company has spoken with contractors for FedEx Corp. and UPS to use his vehicles for delivery.

B-line takes the concept of “smaller is better” even further. The Portland, Oregon-based company uses electricity-assisted tricycles that carry up to 700 pounds. Founder and CEO Franklin Jones said the human-powered tricycles have a competitive advantage because they can utilize the entire streetscape, including bike lanes, and can park near the front door.

Jones said his company can reduce congestion and emissions, and have a mutually beneficial relationship with motor carriers.

“A lot of people want to put us against trucks, like, kind of say, ‘Hey, it’s trikes versus trucks.’ That’s not really the case. We’re just right-sizing the fleet,” he said.

B-line is a small company. In comparison, UPS has more than 104,398 package cars, vans, tractors and motorcycles, and 650 aircraft. But it also uses old-fashioned means of delivery: gondolas in Venice, Italy, bicycles in German cities and a horse and buggy in Mackinac Island, Michigan, which is accessible only by boat and air and doesn’t allow cars or trucks.

In the retail space, Wal-Mart Stores Inc. is finding ways to get customers to the products. Company spokesman Ravi Jariwala said the 4,500 stores serve as e-commerce fulfillment nodes where customers can pick up merchandise purchased online. The retailer offers online grocery shopping in more than 20 markets, where customers show up to the store after ordering online and the groceries are wheeled out to them at no extra charge without leaving their car. Wal-Mart has five new e-commerce facilities, each at least 1 million square feet. There also are dozens of smaller fulfillment centers and distribution centers pulling double duty in e-commerce.