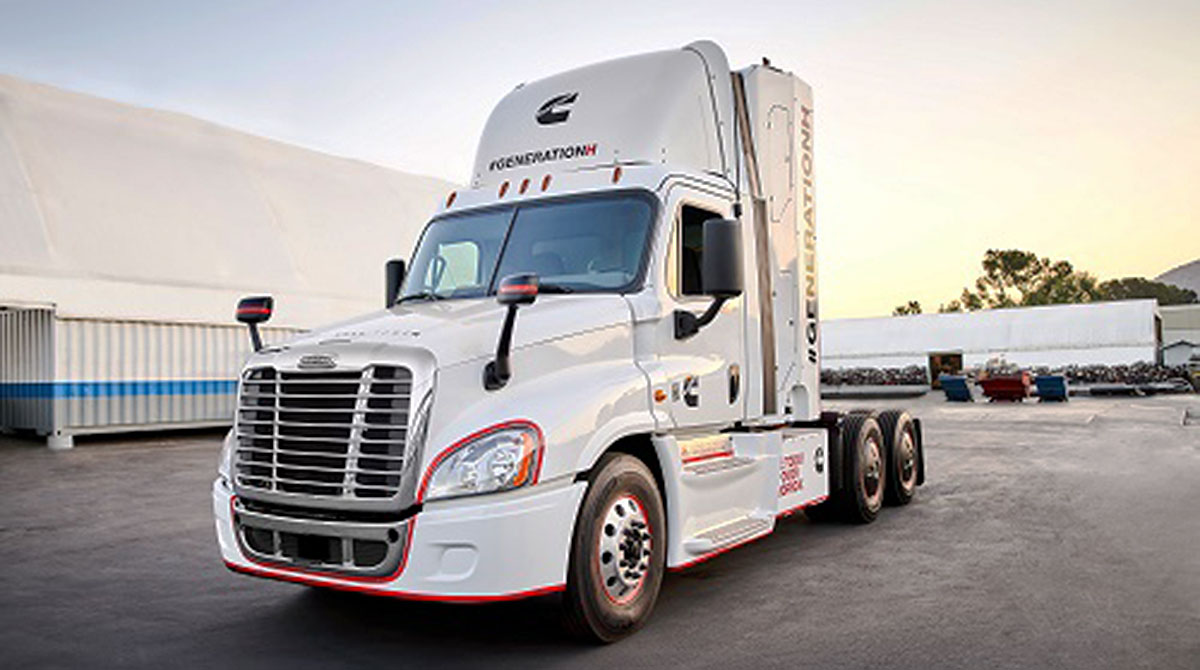 Cummins' PEM fuel cells can be found in a Class 8 truck for the California Energy Commission. (Cummins Inc.)

Chevron U.S.A. Inc., through its Chevron Products Co. division, and Cummins Inc. announced a memorandum of understanding to explore a strategic alliance to develop commercially viable business opportunities in hydrogen and other alternative energy sources.

The MOU provides the framework for Chevron and Cummins to initially collaborate on four main objectives:

“Collaborating with Cummins is a positive step toward our goal of building a large-scale business in a lower-carbon area that is complementary to our current offerings,” Andy Walz, president of Chevron’s Americas Fuels & Lubricants, said in a release.

We're excited to collaborate with Cummins to help advance a lower carbon future by exploring hydrogen opportunities. Check out the full press release below https://t.co/CL3v5TBdZ2

San Ramon, Calif.-based Chevron also is blending renewables into its fuels, co-processing biofeedstocks in its refineries, and has abatement projects that will reduce the carbon intensity of its operations, according to the company.

Columbus, Ind.-based Cummins has deployed 2,000 fuel cells and 600 electrolyzers around the world. It is exploring other hydrogen alternatives including a hydrogen-fueled internal combustion engine. “The energy transition is happening, and we recognize the critical role hydrogen will play in our energy mix,” said Amy Davis, vice president and president of New Power at Cummins.

Following the proof-of-concept testing, Cummins plans to evaluate the engine in a variety of on- and off-highway commercial vehicle applications.

“We are using all new engine platforms equipped with the latest technologies to improve power density, reduce friction and improve thermal efficiency, allowing us to avoid the typical performance limitations and efficiency compromises associated with converting diesel or natural gas engines over to hydrogen fuel,” said Srikanth Padmanabhan, president of the engine segment at Cummins. “We have made significant technological advancements and will continue moving forward. We are optimistic about bringing this solution to market.”

Hydrogen engines offer original equipment manufacturers and end-users the benefit of adaptability by continuing to use familiar mechanical drivelines with vehicle and equipment integration mirroring that of current powertrains while continuing to provide the power and capability for meeting application needs, according to Cummins.

The hydrogen engines can use green hydrogen fuel, produced by Cummins-manufactured electrolyzers, emitting near-zero carbon dioxide emissions through the tailpipe and near-zero levels of nitrogen oxides.

“We tend to think hydrogen is going to be more of a heavy-duty commercial vehicle solution,” said Steve Tam, vice president at ACT Research.

“There might be some in the medium-duty ranks, but battery-electric vehicles fit very well in this duty cycle. Electric already has the advantage of lower cost over hydrogen,” he added.

Tam suggested, however, some fleets using hydrogen in larger trucks could also use it in medium-duty vehicles to consolidate fuel options to get economies of scale.

We're excited to announce we have teamed up with @Chevron to develop commercially viable opportunities in hydrogen and other alternative energy sources. #Cummins #GenerationH https://t.co/zMg2DL6xpy

“It will be available in medium-duty but it is just a question of what the adoption rates will be,” he said. “It’s going to start on the heavy-duty end and move down, as opposed to the other way around.”

“You’d expect that the focus would be around California, which makes sense,” including hydrogen fuel dispensing at some of its service stations.

Breber noted transportation is the fourth largest source of greenhouse gas emissions globally. The first is manufacturing; second, power generation; and third is agriculture and land use.