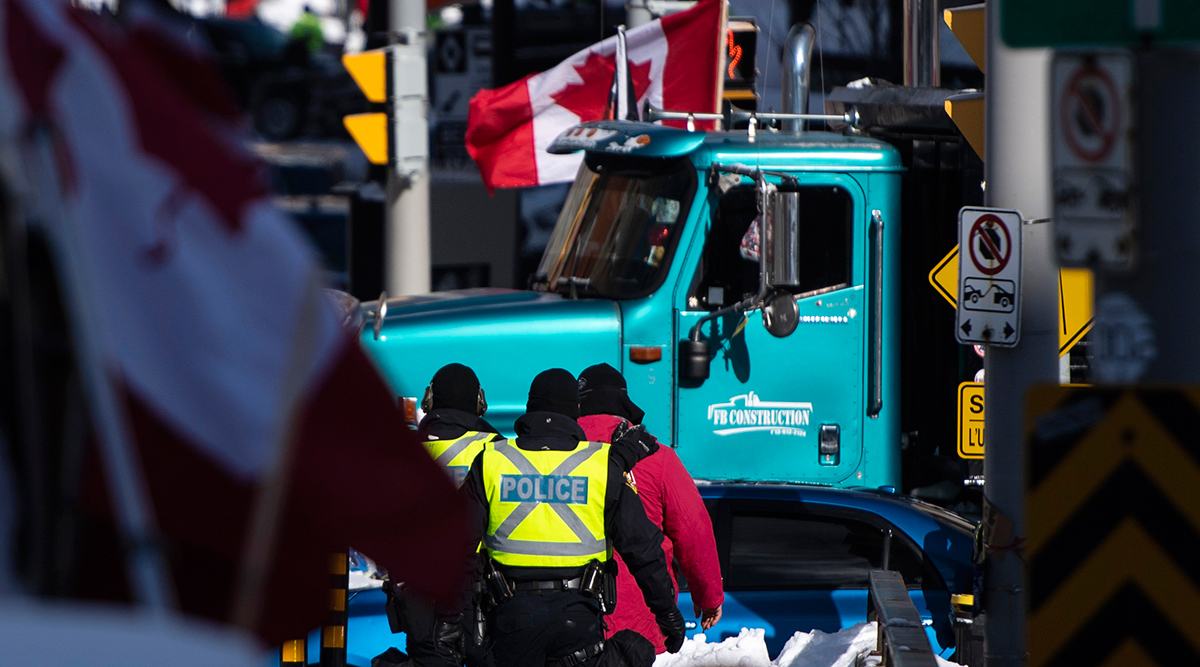 A trucker, in red jacket, is led away by police officers after stepping out of his truck. (Justin Tang/The Canadian Press via Associated Press)

OTTAWA, Ontario — Police arrested scores of demonstrators and towed away vehicles Feb. 18 in Canada’s besieged capital, and a stream of trucks started leaving under the pressure, raising authorities’ hopes for an end to the three-week protest against the country’s COVID-19 restrictions.

By evening, at least 100 people had been arrested, mostly on mischief charges, and nearly two dozen vehicles had been towed, including all of those blocking one of the city's major streets, authorities said. One officer had a minor injury, but no protesters were hurt, interim Ottawa Police Chief Steve Bell said.

Police “continue to push forward to take control of our streets,” he said, adding: “We will work day and night until this is completed.” 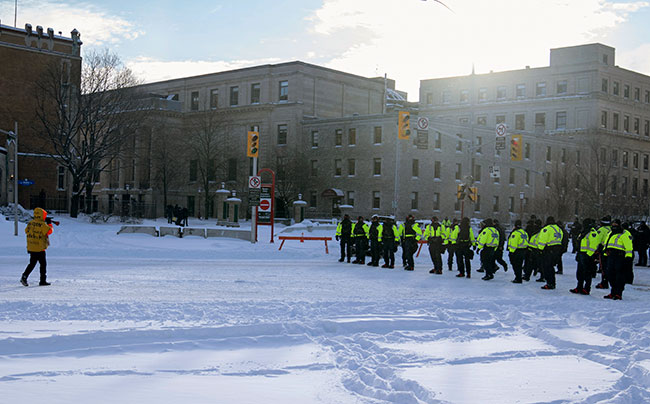 Police face off with a protester on Feb. 18 in Ottawa. (Robert Bumsted/AP)


Those arrested included four protest leaders. One received bail while the others remained jailed.

The crackdown on the self-styled Freedom Convoy began in the morning, when hundreds of police, some in riot gear and some carrying automatic weapons, descended into the protest zone and began leading demonstrators away in handcuffs through the snowy streets as holdout truckers blared their horns.

Tow truck operators — wearing neon-green ski masks, with their companies’ decals taped over on their trucks to conceal their identities — arrived under police escort and started removing the hundreds of big rigs, campers and other vehicles parked shoulder-to-shoulder near Parliament. Police smashed through the door of at least one RV camper before hauling it away.

Scuffles broke out in places, and police repeatedly went nose-to-nose with the protesters and pushed the crowd back amid cries of “Freedom!” and the singing of the national anthem, “O Canada.”

Police said late in the afternoon that protesters had assaulted officers and tried to take their weapons. Some began dismantling equipment at a stage where they had played music for weeks, saying they didn’t want it to get destroyed.

Many protesters stood their ground in the face of one of the biggest police enforcement actions in Canada’s history, with officers drawn from around the country.

“Freedom was never free,” said trucker Kevin Homaund of Montreal. “So what if they put the handcuffs on us and they put us in jail?” 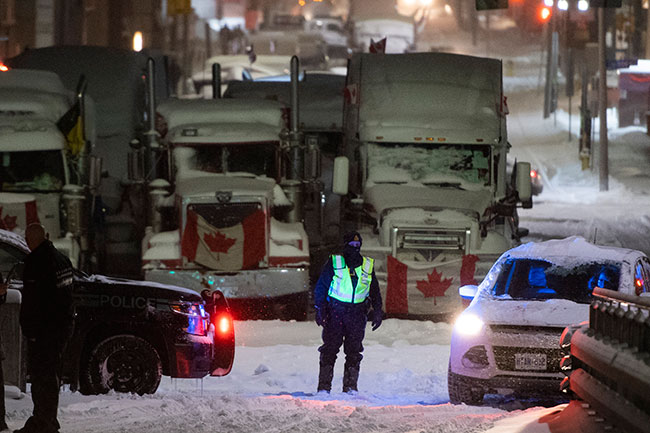 An officer mans a roadblock along Wellington Street in Ottawa on Feb. 18. (Justin Tang/The Canadian Press via AP)


But a steady procession of trucks began leaving Parliament Hill in the afternoon.

“There are indications we are now starting to see progress,” Ontario Premier Doug Ford said.

Police would not disclose how many protesters or vehicles remained downtown. All indications were that police would be working into the weekend to clear the area.

The capital and its paralyzed streets represented the movement’s last stronghold after weeks of demonstrations and blockades that shut down border crossings into the U.S. and created one of the most serious tests yet for Prime Minister Justin Trudeau. They also shook Canada’s reputation for civility, with some blaming America’s influence.

The Freedom Convoy demonstrations initially focused on Canada’s vaccine requirement for truckers entering the country but soon morphed into a broad attack on COVID-19 precautions and Trudeau’s government.

Ottawa residents complained of being harassed and intimidated by the truckers and obtained a court injunction to stop their incessant honking.